…in his State of the State speech. 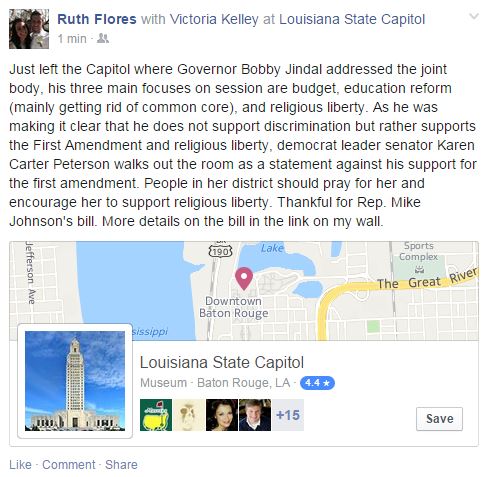 HB 707 is, of course, Rep. Mike Johnson’s bill barring state or local governments in Louisiana denying citizens the right to do business on the basis of their conscience as relates to marriage.

As Kevin Boyd noted a week ago, Johnson’s bill is written to pass, and easily.

The Democrats are doing everything they can to demagogue this bill and turn it into an anti-gay measure, though it’s written to protect people of all kinds of ideological and cultural persuasions. On Friday, this writer appeared on the Jim Engster Show opposite a left-wing blogger named Dayne Sherman who spent the segment on the bill screaming about how it’s going to destroy Louisiana’s tourist economy once everyone knows that Louisiana just made it legal to discriminate against gay people.

Which is irresponsible and stupid, and interestingly enough not even persuasive within what’s left of the Democrat Party in Louisiana.

There were 144 state legislators in the House Chamber when Jindal offered support for Johnson’s bill. Some 143 of them didn’t get up and leave when he made the statement.

And many of those legislators are black Democrats like Karen Carter Peterson is. They didn’t get up and leave.

Is it a surprise that Katrina Jackson didn’t get up and leave? Not exactly. Katrina Jackson isn’t exactly a social liberal; she is, after all, the author of Louisiana’s Texas-style abortion-restriction bill from last year.

How about Sharon Weston Broome? In more years than not, she’s walking on the stage at the Louisiana Family Forum’s legislative banquet to receive an award as a Family Advocate and having her picture taken with Gene Mills.

How well does gay marriage sell in the black community? How well does it sell among rural black people who attend churches with quite traditional messages on values and morality being shared?

And what about white Democrats like Major Thibaut and Mike Danahay, who routinely walk on the Family Forum stage?

Democrats like Karen Carter Peterson and Dayne Sherman seem to be taking a lot for granted in assuming that the national Left’s social agenda has been swallowed whole by their voters. If anything, a bill protecting freedom of conscience in the private sector is a wedge issue among Louisiana’s Democrats far more than a far-right overreach.

The state Democrat Party might act like this is some wild atrocity being committed. They’re going to have trouble keeping their membership from crossing over and voting for it.

Peterson lacking company when she made her empty gesture in walking out of the chamber at Jindal’s support for religious liberty speaks volumes. If she was going to make an ass of herself she could have used some compatriots, and she had none. Don’t call attention to your opposition when doing so only sets you up to look weak.

Interested in more news from Louisiana? We've got you covered! See More Louisiana News
Previous Article Am I The Only One To Notice That Hillary’s Campaign Logo Is A Huge Insult To The Democrat Base?
Next Article SARGE: Like It Was A Mystery, Or Something