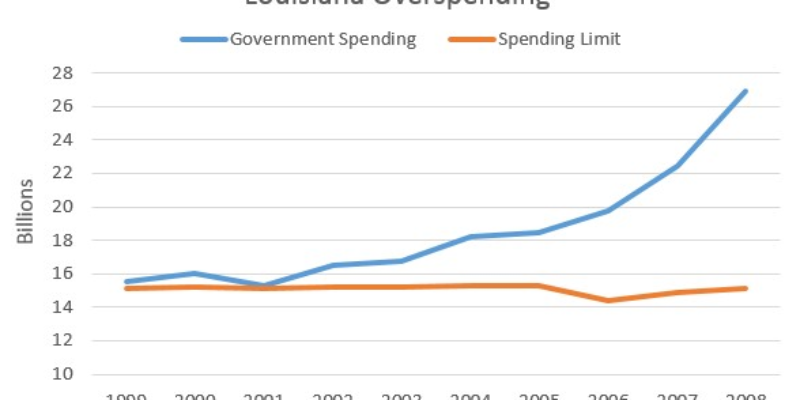 Louisiana’s legislative session ends at 6 pm this evening and legislators have yet to come to an agreement on to how to balance the budget. The Baton Rouge Advocate referred to the current situation as “Louisiana’s worst budget crisis since the late 1980s.”

Some Louisiana legislators, both Republicans and Democrats, want the budget to be balanced with higher taxes. Already a number of Republican members of the House are on the record voting for over $600 million in higher taxes. Others argue that the current tax code, while in need of reform, brings in sufficient revenue and that the state should put spending in line with available funds.

Looking at historical data, it’s clear the problem with the Louisiana budget is on the spending, not tax, side of the ledger. The charts below show that Louisiana government spending during last decade grew much faster than the rate of population growth and inflation. The orange line below shows growth in population and inflation in Louisiana from 1999 to 2009. The blue line represents growth in Louisiana government spending during that period. 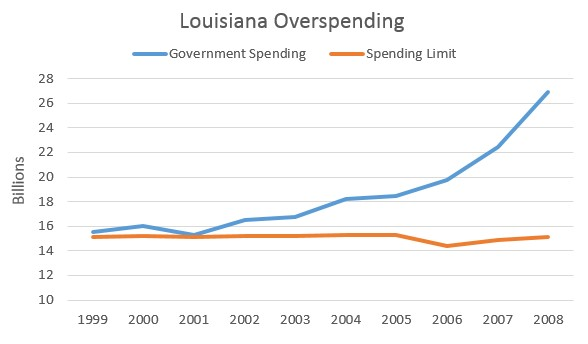 Had Louisiana politicians kept spending in line with population growth and inflation – a reasonable metric for sustainable budgeting – Louisiana would’ve spent $34.9 billion less in taxpayer dollars than it did during the previous decade. After being hit with the more than 20 federal tax increases signed into law by President Obama in recent years, the last thing Louisiana residents need are higher state taxes.

When it comes to the question of whether Louisiana has a spending or revenue problem – to modify a saying popularized by a famous Louisianan – it’s the spending, stupid.

Interested in more news from Louisiana? We've got you covered! See More Louisiana News
Previous Article And Now The News The Media Isn’t Reporting
Next Article Mitch Landrieu Is 12 Days Late On ‘Living Wage Impact Report’ And No One Is Being Held Accountable