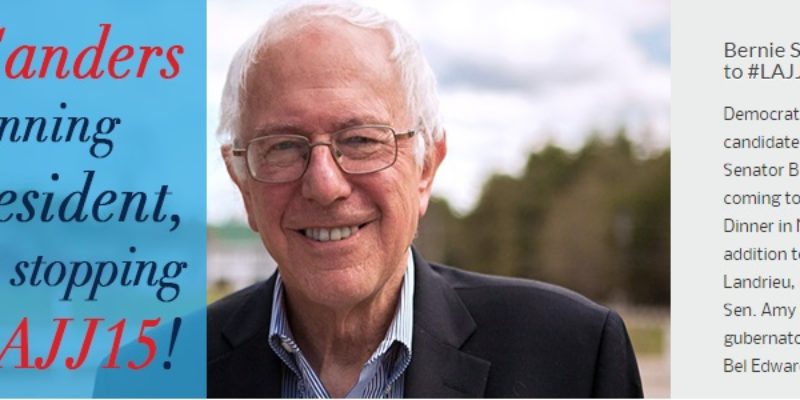 These days, the Louisiana Democratic Party (La Demos) is trying to be as politically correct as possible.

And apparently that means branding the La Demos’ annual Jefferson-Jackson Dinner in a very different way in an attempt to not offend anyone in the politically correct crowd.

This year, the La Demos have cleverly branded the Jefferson-Jackson Dinner, named after Thomas Jefferson and Andrew Jackson, the “J-J Dinner.”

Of course, this comes after the Missouri Democratic Party decided to rename their Jefferson-Jackson Dinner to the Harry Truman Dinner. Because all things must be politically correct and non-offensive to everyone, Democrats are having to disavow their own historical Democratic party members.

Just look at the banner for the “J-J Dinner” on the La Demos’ website:

Oh, did we mention that they have invited self-proclaimed and proud socialist 2016-hopeful Sen. Bernie Sanders?

Naturally, Sanders fits perfectly with the fact that the La Demos are quietly trying to change the name of their dinner and ignore history, because in similar fashion, the Vermont socialist ignores how many individuals have died under the regimes of the socialist and communist system.

The La Demos’ move to try to change the name of their Jefferson-Jackson Dinner follow the overtly politically correct orders from Mayor Mitch Landrieu of New Orleans who is asking that all Confederate-related monuments in the city be removed and replaced.

The bottom line is when did Thomas Jefferson and Andrew Jackson become bad guys? When did they become not progressive enough and not revolutionary enough?

Interested in more news from Louisiana? We've got you covered! See More Louisiana News
Previous Article Mitch Landrieu Loved The Confederacy Before He Hated It
Next Article Do New Orleans Politicians Still Stand With Planned Parenthood?