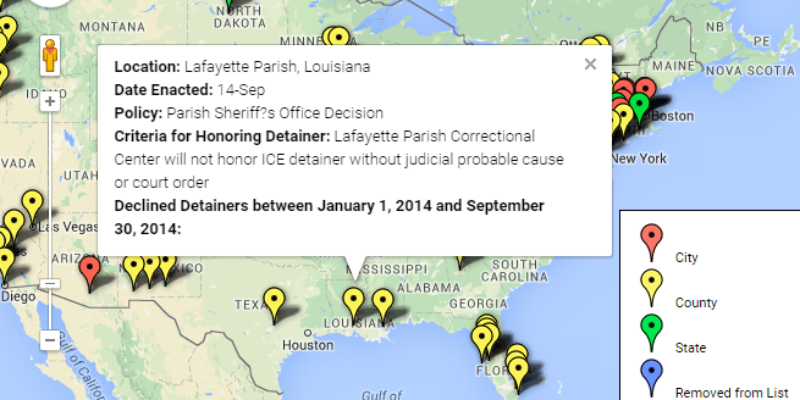 There are at least two issues this election cycle that the Louisiana media is willfully ignoring: Illegal immigration and sanctuary cities that harbor the undocumented population.

After the Hayride exposed how Lafayette Parish, along with New Orleans now, is a sanctuary city, the no major Louisiana media outlet has even mentioned the revelation, even though immigration is one of the biggest issues in state-wide and national elections this year.

Specifically in the Lafayette and Acadiana area, the four major media outlets have been silent on the issue, even though Lafayette Parish is on a national map of identified sanctuary cities.

One quick search on The Daily Advertiser, KLFY News, KATC News and The Independent shows that none of the media outlets have reported how the area in which they primarily report news for is, in fact, a sanctuary city.

KATC News is the only media outlet that has uttered the words “sanctuary city,” but their story on the issue revolved around a Lafayette political fight between parish president and sheriff candidates, reporting the facts as “claims.”

This kind of ignoring of the facts regarding illegal immigration in the state and sanctuary cities is similar to how NOLA.com and the New Orleans Advocate reported on the Big Easy as a sanctuary city, where it was quickly swept under the rug.

Most of the time, when Louisiana media outlets do report on illegal immigration, they refer to illegals as “undocumented workers” or “undocumented migrants.”

See what the Lafayette media is reporting instead of this issue HERE.

Interested in more news from Louisiana? We've got you covered! See More Louisiana News
Previous Article As Bad As The Democrat Debate Was, It Was Better Than The Republican Debates For This Reason…
Next Article Please Jennifer Lawrence, Don’t Get Sucked Into The Whining Feminist Nonsense