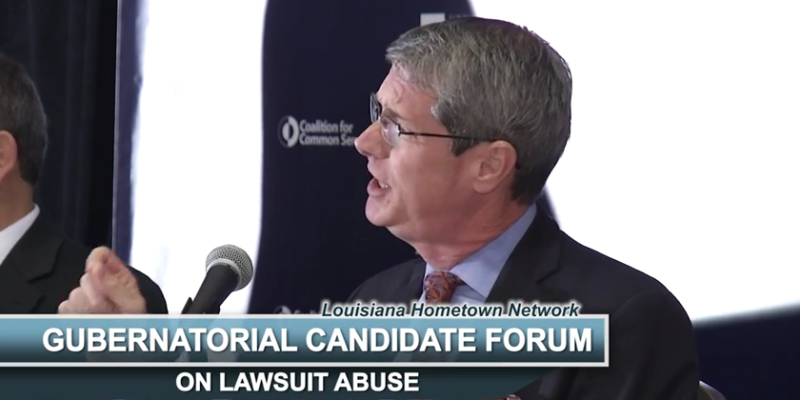 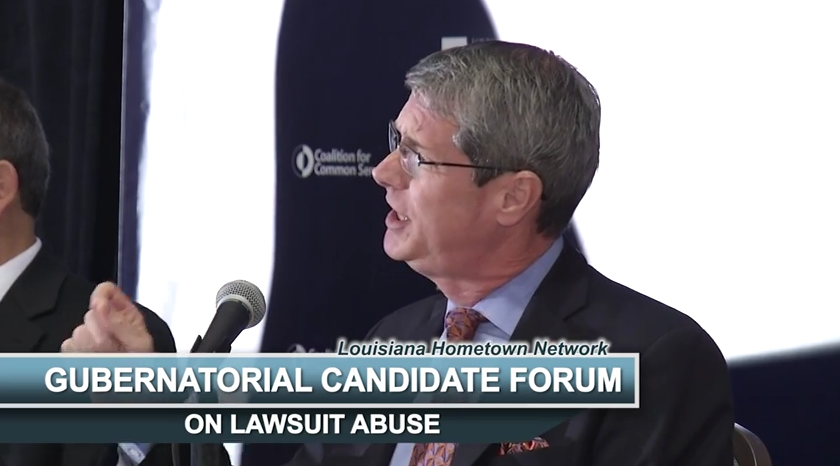 “I understand the problems we have in Louisiana from a practical standpoint when it comes to lawsuits,” said candidate and Lt. Gov. Jay Dardenne. “I understand how they affect society, individual claimants and defendants.”

“For too long Louisiana has regularly been ranked as having the second worst legal climate in the country,” said candidate and U.S. Senator David Vitter.  “We need reform now, and it’s great that we’re having a substantive discussion about these issues today. I am the only candidate in this race with a plan to fix our broken system and help Louisiana businesses grow and succeed.”

LLAW and CCS invited all four of the major gubernatorial candidates to participate in the hour-long forum.  Public Service Commissioner Scott Angelle, a Republican, and state Rep. John Bel Edwards, a Democrat, were unable to attend due to scheduling conflicts.

The 2015 Gubernatorial Forum on Lawsuit Reform is available for immediate viewing online here.

In addition, the forum will be broadcast statewide on the Louisiana Hometown Network.  For a complete television broadcast schedule, go here.

Dardenne and Vitter addressed questions regarding excessive litigation, forum shopping, legacy lawsuits and the impact of the state’s $50,000 jury trial threshold, which is, by far, the highest in the nation.

The discussion was moderated by former state Rep. Chuck McMains, who authored significant tort reform legislation during Gov. Mike Foster’s administration.
“I was very encouraged by both of the candidates’ knowledge of and willingness to address Louisiana’s legal challenges,” said McMains.

When asked “would you support or oppose legislation to establish proper venue and discourage forum shopping in civil litigation?” Vitter said, “I strongly support that proposal, and as governor, I will bring it forward in my first term.  It is one of the crucial lawsuit abuse reforms that we need in Louisiana.”

In response to the same question, Dardenne said, “I think there is a considerable amount of forum shopping that goes on. I think it is appropriate to allow a plaintiff to file suit in whatever venue he resides.  That is clearly a part of Louisiana law. And the venue to bring defendants to answer for their alleged wrongdoings ought to be in a place where the substantial injury has occurred. Our laws do not allow us to limit it in that way right now, and I would support such efforts.”

LLAW and CCS work to ensure lawsuit fairness for all in Louisiana, from the truly impaired individual to the small business owner. Together the organizations represent more than 10,000 professional associations, companies and individuals who are dedicated to improving the state’s legal climate.

Despite some modest reforms in recent years, the perception that Louisiana has one of the most litigious legal environments in the country persists.  For example, the U.S. Chamber Institute for Legal Reform recently ranked Louisiana’s lawsuit climate as 49th out of all 50 states.  At the same time, the Center for Public Integrity gave Louisiana an “F” for judicial accountability, while the American Tort Reform Association has singled out Louisiana as a “judicial hellhole” five years running.

Many Louisiana voters agree with these assessments. A poll conducted last year found 72 percent of Louisiana voters believe there are too many lawyers filing frivolous lawsuits in our state, and 76 percent said state laws need to be strengthened to limit lawsuit abuse.

To address these challenges, LLAW and CCS are calling on all gubernatorial and legislative candidates across the state to support legal reform, specifically including efforts to:

Interested in more national news? We've got you covered! See More National News
Previous Article Woody Jenkins And His ‘Endorsements’ Get Destroyed By A Blogger
Next Article Various Items On The Governor’s Race