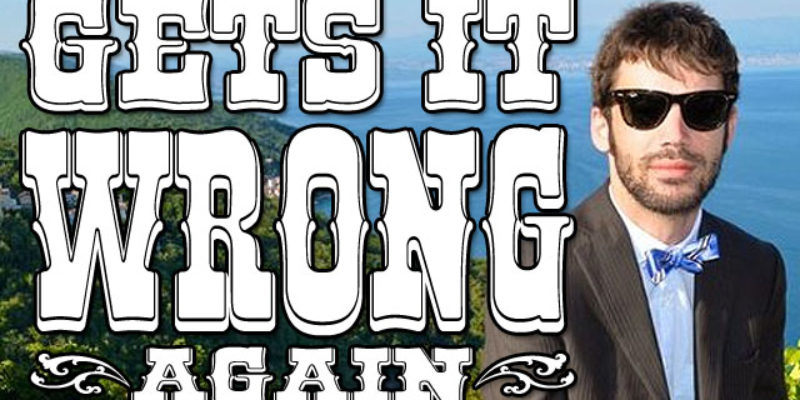 …namely, the fact that the Usual Suspects, Bob Mann, Tom Aswell and Lamar White, have seized upon something they found in a David Vitter campaign finance report to attack the credibility of this site and the people who write for it.

Make sure you’re sitting down for this, but the Usual Suspects have figured out that the Vitter campaign has advertised on the Hayride and paid for those ad banners.

As it happens, the regular readers of this site are perfectly well aware of that fact, having seen banners for Vitter on the sidebar and at the top for the past nine months or so. One imagines the regular readers assumed there was a rate paid for those banners, particularly since at the very top of the site is a tab that says “Advertise” and at that tab is a rate card.

We use a number of ad networks to fill the five ad spaces on the site – in fact, here’s a funny story many of you might not have heard. Not too long ago another left-wing idiot who was incensed about something said on this site went out and tried to instigate a boycott of the advertisers at the Hayride, but since it wasn’t election season and almost all of the ad spaces on the site were showing network ads, he clicked through the site a million times trying to make a list of our advertisers and put up on Facebook some two dozen national companies he’d seen banners for. Those national companies bought ads on networks in an attempt to reach him based on things like his shopping and browsing habits and we’d never had the first contact with the advertising departments of any of them. And yet he wanted to boycott them because he thought our ad sales department had made them sponsors of the site.

It was actually hilarious, and fairly instructive as to the idiocy of your typical socialist Democrat.

But in any event, since for the last six months we’ve been in campaign season most of the ad spaces on this site have been campaign ads, rather than ad network ads. And Vitter has been one of them.

So has Scott Angelle, by the way. Billy Nungesser has advertised as well; neither one got my endorsement.

We’ve had a number of other candidates advertising on the site, too.

Candidates advertising, particularly in places where the readership or audience is likely to be friendly, is hardly a surprise. Watch Fox News for a while, and you’ll see a lot more ads for Vitter and the Fund For Louisiana’s Future than you will for John Bel Edwards. That’s not exactly breaking news, unless you’re a left-wing idiot like Lamar White who can’t help making lame arguments like this…

John Bel Edwards is a veteran, a paratrooper, and a veteran, and he absolutely does not deserve the pathetic indignity. As it so happens, McKay’s most prolific donor is David Vitter. That is Scott’s bankroll.

The “indignity” supposedly suffered by John Bel Edwards is an analogy I made on Facebook last night. The analogy goes like this: I understand if you say you can’t support Jimmy Swaggart because of his indiscretions and disgrace. I’m not going to criticize that. But when Jimmy Swaggart is running against Anwar al-Awlaki, I expect your vote for Swaggart. You don’t have to like it, but you’re going to have to do your duty.

Yes, John Bel Edwards is Anwar Al-Awlaki in the analogy, in the sense that John Bel Edwards espouses an ideological position much different from, and very hostile to, that which the people I’m addressing espouse. Namely, if you’re a conservative or Republican voter, which would make you among the somewhere between 57 and 60 percent of the state’s electorate, your ideological home is not with one of the state’s most left-wing legislators. It’s with the guy who espouses the same conservatism you do, even if his behavior in the past fell short of the standard we all agree to.

Lamar, who thinks he’s quite intelligent, is either a moron or he’s disingenuous and believes his readers are morons. He’s shown that on two counts here – first, by equating a business transaction for advertising space to the status of “donor” and that Vitter is “bankrolling” this site, which is clearly false, and second, by completely, and intentionally, missing the point of a relatively obvious analogy.

And the idea you can “bankroll” a site like this or control its content for $1,000 per month is beyond hilarious, and it shows how divorced from commercial reality Lamar is. Which makes sense, seeing as he’s a trust fund baby who doesn’t actually need to pursue a living – the proof of which being that after graduating from the most expensive law school within 1500 miles (SMU in Dallas), he is now at LSU pursuing a PhD in Mass Communications. Which nobody, nobody, does because that is one of the most worthless degrees in existence and the only people who would do such things are people who don’t need to make money.

And that, by the way, is why there is no advertising on Lamar’s blog.

So perhaps he truly is coming from a place of ignorance when decrying the crass commercialism that goes on here at the Hayride, and perhaps he truly believes that our bloviating and polemicizing here in favor of the conservative candidate (on a conservative site, no less!) is insincere. Sure, but for the princely sum of $1,000 per month – the median income in the fabulously rich nation of Greece – we’d be extolling the praises of John Bel Edwards.

Even Lamar, addled as he is by his ideology, has to know that’s ridiculous.


Interested in more national news? We've got you covered! See More National News
Previous Article The Low Popahirum, November 3, 2015
Next Article The Louisiana Media Has A Track Record Of Ignoring The Backgrounds Of Criminal Immigrants