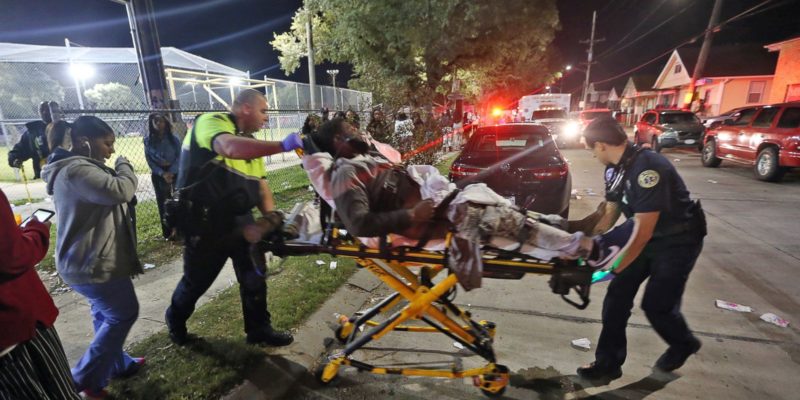 The latest New Orleans mass shooting at a crowded Upper Ninth Ward park has garnered national attention from ABC News, the Associated Press, NBC News, the Huffington Post and every other major media outlet in the country.

The mass shooting left at least 17 people (more than half of which are under 21 years-old) wounded and hospitalized. And currently, the New Orleans Police Department (NOPD) is attempting to find the two gunmen involved in the shooting, though law enforcement has not released a description of either of the men.

Following the mass shooting, New Orleans Mayor Mitch Landrieu and NOPD Chief Michael Harrison held a press briefing about the shooting. This is when Landrieu called the shooting an “act of domestic terrorism.”

However, is the mass shooting actually an act of domestic terrorism or is this just another day in New Orleans?

Landrieu’s statement about the shooting may have to do with the fact that he wants to appear tough on crime, therefore using a harsh label will get the message across that crime is first on his agenda items.

Domestic terrorism was officially defined by the Federal Bureau of Investigation (FBI) in 1994 as “the unlawful use of force or violence, committed by a group(s) of two or more individuals, against persons or property to intimidate or coerce a government, the civilian population, or any segment thereof, in furtherance of political or social objectives.”

It’s still unknown whether or not the mass shooting was gang-related as the NOPD has not yet released that information yet to the public.

As the Hayride has extensively reported, crime in New Orleans has slowly been ticking back up to pre-Katrina levels ever since the Hurricane struck the city.

Mass shootings are not all that uncommon in New Orleans and the national headlines about the recent park mass shooting where residents are quoted saying that they do not feel safe has been the sentiment in the city for quite sometime.

Just last year, the now famous Bourbon Street shooting in the city left 10 people wounded. Just a few months ago, a French Quarter shooting left one person dead and two others injured. In 2011, 16 people were wounded and two were killed in a Halloween night mass shooting. In February of this year, a  shooting on a Mardi Gras parade route left one person dead and one person injured. On Mother’s Day in 2013, a gunman opened fire on a second-line parade in the French Quarter, leaving 19 people wounded.

Nearly every year since 2010, there has been at least one mass shooting in New Orleans. And violent crime has been a growing problem, along with armed robbery. Last year, the city’s violent crime rate soared while city officials were focused on the declining murder rate.

This year, violent crime has continued to spiral out-of-control, along with armed robberies (the fastest growing crime in the city), and even the murder rate has ticked back up since last year’s decline in murder.

Residents and citizens in New Orleans are repeatedly told to walk in large groups to avoid being the subject of violent crimes. Those in the city are also told to carry “mug money,” as an armed robbery can soon turn fatal if the victim has no money on them, as we’ve seen in cases throughout this year.

Landrieu’s claim that this particular mass shooting in the Upper Ninth Ward is an “act of domestic terrorism,” would mean that the city faces domestic terror acts at least once a year.

At what point does it just turn into another day in the crime-ridden New Orleans?

Interested in more news from Louisiana? We've got you covered! See More Louisiana News
Previous Article The Liberals Of New Orleans Are Waging A War Against Plastic Bags And You’re Going To Pay For It
Next Article John Bel Edwards Gave His First Post Election Speech Yesterday, What Did He Say?