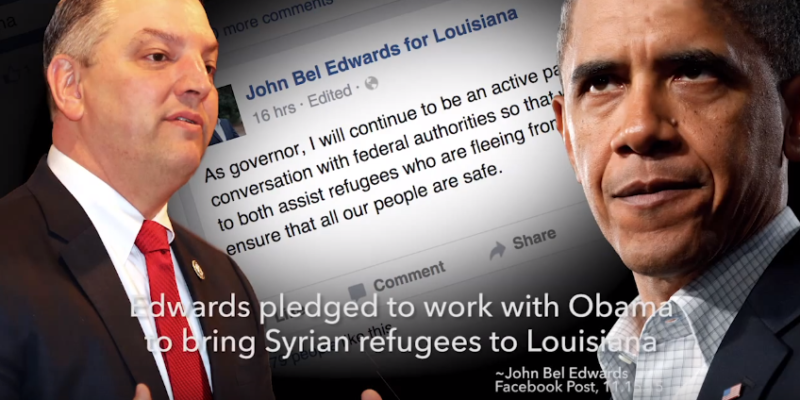 This is, as objectively as I can say it, the best ad of this election cycle.

What makes it so good? It was released on the same day as Edwards’ total muck-up of a statement on the Syrian refugee crisis, it talks about an issue that many people feel very strongly about, and it uses very powerful, very fresh imagery. In every sense of the idea of persuasive messaging, it works.

The icing on the cake here are the last two lines, one from Edwards:

I support the President.

And one from the voiceover:

Now, take what Vitter has put out today. One ad on the party bus tomfoolery and now this one. Compare those two with the “Prostitutes Over Patriots” ad that Edwards led the runoff campaign with.

That’s what Edwards started out with. He led off with an eight-year-old scandal. Vitter punched back, and punched back hard, with two ads in the same day, one on the tackiness of an Edwards event he skipped the Family Forum for, and another hitting the most important issue on everyone’s minds right now.

You can go to social media and see that everyone is talking about the Syrian refugee crisis. No one is talking about Vitter’s past. People want to focus on the present and, most importantly, the future. John Bel Edwards is proving he has nothing to offer either.

This ad is the equivalent of Ken Cuccinelli’s robocalls hitting Terry McAuliffe on his radical pro-abortion stances in the Virginia governor’s race in 2013. It brought Cuccinelli’s within a hair of winning. The difference here? Vitter has the money to get this on the air immediately and make a big impact.