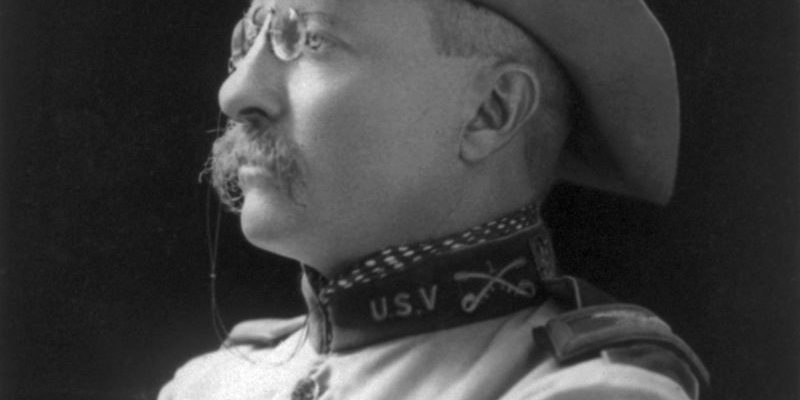 One of my favorite chapters of any book, save the Bible itself, is the prologue to Edmond Morris’ Pulitzer Prize winning classic The Rise of Theodore Roosevelt.  It covers the events 119 years (and a few days) ago – New Year’s Day, 1907 at Theodore Roosevelt’s front gate at 1600 Pennsylvania Avenue, Washington.  Inside, the president shakes “bejeweled and manicured hands” before moving onto the “coarser flesh” of those waiting outside the gate.  Bands play, men and women wait anxiously, and shouts of “DEEEEE lighted” echo through the corridors.

Morris continues with an outstanding summary of the prior six years which have seen Roosevelt rise to great popularity at home and abroad through determined action.   Whatever else may be said about the president, it can never be said that he is a man of words and not deeds. On the contrary he is a man of both.  He took control of the national government after his predecessor was assassinated and led the nation in a time of mourning, mediated the Russo-Japanese War (for which he had just won a Nobel Peace Prize), supervised Cuban independence, and led the nation to begin work on the Panama Canal (he had, in fact, personally visited the Canal site the prior year).

Being a man of action is nothing new for Roosevelt.  From his days as a boxer at Harvard to his capture of Redhead Finnegan in the Dakota badlands to his charge up San Juan Hill, Roosevelt never rests on his laurels.  Morris writes that “on winter evenings in Rock Creek Park, strollers may observe the president of the United States wading pale and naked into the ice clogged stream, followed by shivering members of his cabinet. Thumping noises in the White House library indicate that Roosevelt is being thrown around the room by a Japanese wrestler; a particularly seismic crash, which makes the entire mansion tremble, signifies that Secretary Taft has been forced to join in the fun.”

Unfortunately New Year’s day of 2016 featured a much different scene in Washington.  Instead of a man of action walking the halls at 1600 Pennsylvania Ave., we have the most definite poltroon in American presidential history sitting cowardly in the Oval Office while a nebbish Congress sits on Capitol Hill twiddling its thumbs.

Case in Point: The Crier in Chief took to national television to announce some sort of gun control policy yesterday, while crying for the victims of gun violence. You may think to yourself that at least Mr. Obama is doing something, albeit an atrocity to the Constitution, to decrease “gun violence.”  But his move is no real solution to the violence problem in the United States.  It is, indeed, more show by a master showman than a real policy to fix a real problem.

And while a compassionate nation such as ours should cry out for those cut down in the prime of life, it simply will not do for the Commander in Chief to cry on national television.  Voters in Louisiana were treated to that spectacle several years ago, which resulted in a certain ineffectual governor being shown the door after one miserable term.

Of course, no tears were shed for the vulnerable such as the million or so babies aborted in our country last year, nor were tears shed for the men, women, and children, both Muslim and Christian, murdered by terrorists in ISIS controlled territories.  While possessing more power than any man alive, Mr. Obama seems unable or unwilling to wield his power to do great deeds.  Instead, he uses it for petty, useless policies and for crying.

The Grand Caitiff is aided by a rampant mob of school boys which inhabit the United States Congress and which are led by an interminable runt of a Speaker who, on most occasions, seems much more concerned about preventing a shutdown of the government than he does about standing for those principles upon which he (not to mention his party) were elected and whose major life achievement seems to be growing a beard.  The budget bill recently passed by the Republican-controlled Congress is a sufficient embarrassment to the Republican Party that the liberals need not worry about Republican activism for a long time to come.  That they have yet to stop Obamacare, Planned Parenthood, or an out-of-control federal bureaucracy indicates that they are either untruthful in their espoused beliefs or are inadequate to the task before them.  Either option is unacceptable.

In short, our Great National Problem is that we face a dearth of real leaders, of men and women of action.  Our government is a government of wusses.  Liberals have taught us that the vigorous virtues of action are not to be tolerated in our tolerant society and that, instead of acting when action is required, we must sit and talk and brainstorm.  While I certainly do not agree with many of his policies, at least Theodore Rex acted when the time for action came.

Let us hope that 2016 brings a Republican party which shows its conservatism in addition to pontificating about it. Let us pray that God will give us men and women in public life who are men and women of actions and deeds.

A little thumping in the White House library couldn’t hurt either.