Elizabeth Crisp at the Baton Rouge Advocate put out a piece every Louisianan interested in fiscal sanity probably ought to read, hinting at the fairly obvious but politically untouchable proposition that Louisiana has far too many public universities and needs fewer of them in order to maintain suitable funding for good-quality universities.

The nub of the issue – Louisiana has 14 four-year public universities, six of which are in the northern part of the state where the population is exceedingly sparse, while Florida has only 12. And while 11 of Florida’s 12 public universities have more than 10,000 students, only four of Louisiana’s 14 do.

What that means is Florida is realizing economies of scale on things like administrative costs and full classrooms for 2000 level classes and above, Louisiana is not.

And it also means there are a good number of tiny public colleges which could go away and, at least over the long term, save the state money.

LSU-Alexandria, for example, was a two-year school until about 10 years ago. It has a poor six-year graduation rate and only 3,104 students. Southern University’s New Orleans campus is even smaller, with 2,715 students. LSU-Shreveport has only 4,353 students and Grambling has just 4,553.

Of those four, you could make an argument that LSU-Shreveport is a strategic campus and the state needs to maintain it for the purpose of having a university in Louisiana’s third-largest city – though perhaps a merger with Louisiana Tech that brings the Tech campus to Shreveport, where the population is, might be the best idea. The others? We’ve written pretty extensively that the state would likely be better off consolidating them or perhaps cutting them loose as independent entities run locally or even setting them adrift as private schools with the market setting their mission and curriculum. 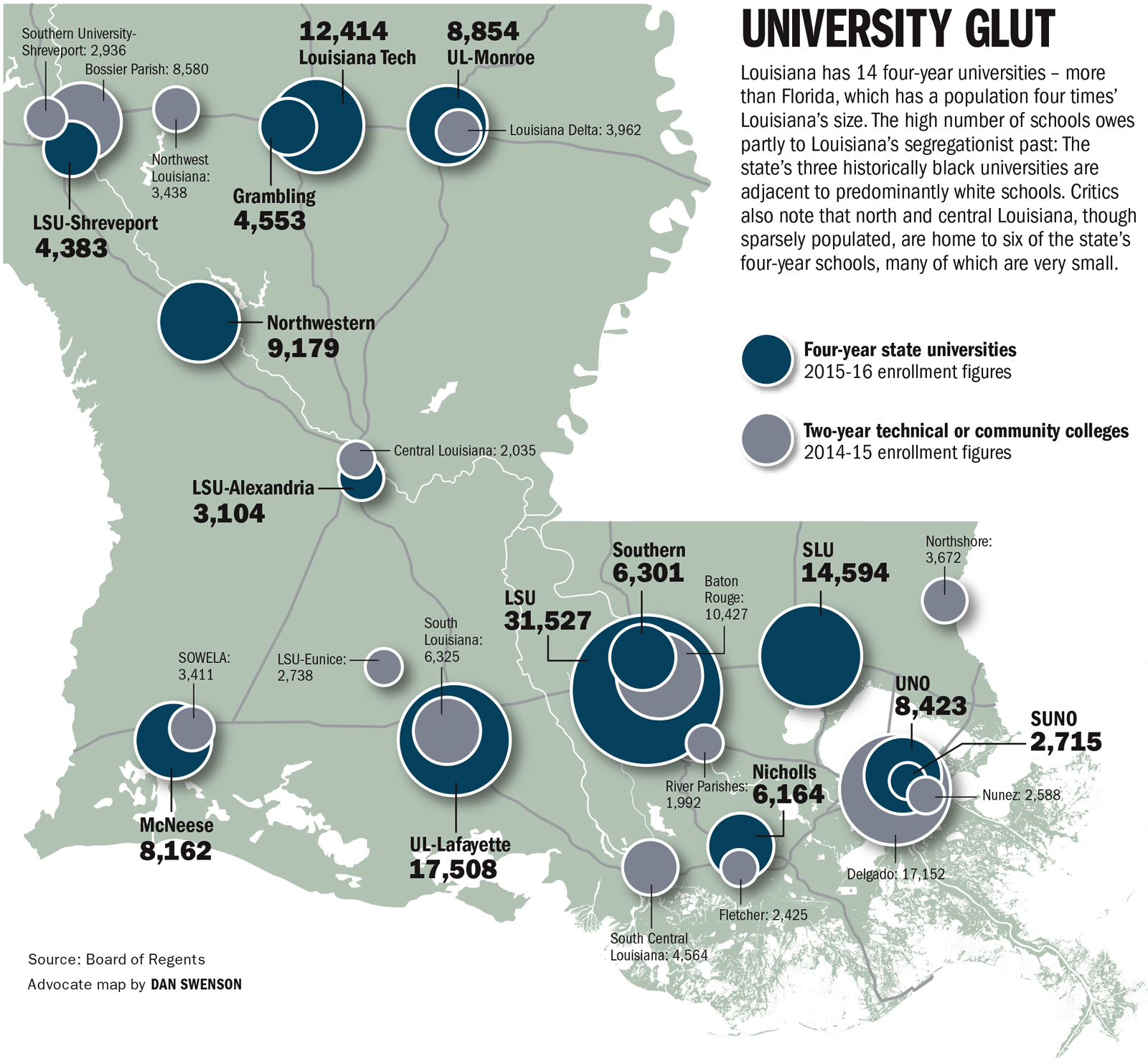 And it’s also fairly obvious, though not from this map because they’re not included in it, that public universities have crowded out the existence of private ones. Louisiana has only seven four-year private universities, a ratio which is reversed from that of most states in which small private colleges are numerous and large public universities are less so. And worse, five of the seven – Tulane, Loyola, Xavier, Dillard and Holy Cross Seminary – are in New Orleans, with only Louisiana College in Pineville and Centenary College in Shreveport in the rest of the state.

Perhaps the smart move going forward isn’t to close these public universities, many of which the state simply doesn’t have the resources to maintain a healthy funding base for, but rather to spin them off. There was an idea circulating last year, for example, to move UNO out of the University of Louisiana system and to reincarnate it as a city university run by an entity made up of officials from Orleans, Jefferson, St. Tammany and St. Bernard parishes and funded by a taxing district operating in that area. That way UNO would be free to sink or swim outside of the strictures of the state’s constant funding issues, yet maintain the benefits of things like TOPS scholarships.

Something similar could happen with LSU-Shreveport, which really should be a bigger and more prominent school. Historically the LSU campuses outside of the main Baton Rouge one (and chiefly this is true of the UNO folks, who became so frustrated that a few years ago they managed to get themselves moved into the University of Louisiana system, though with no discernible improvement in attention or resources) have complained of short shrift from the LSU Board of Supervisors, and those complaints are not unfounded. LSU’s Baton Rouge campus is competing with flagship universities across the country and is starved of resources to do that, so Alexandria, formerly New Orleans, Shreveport and Eunice would by necessity get short shrift. Those campuses exist, at present, so as to maintain a geographic presence near enough state legislators that when LSU goes to the state capitol looking for funding they can call on the regional delegations for support of the LSU system.

But it’s a lousy way to run a railroad. LSU should be focused on that flagship competition, and not a lot else. The minor campuses are a distraction, and as they recognize a drain on LSU’s resources. And the higher education system in the state is set up for little else other than to lobby the legislature for dollars from the general fund, not to attract students (think about it: there is a public university in New Orleans, which is probably the greatest place in the world to be a college kid, and it has less than 9,000 students; if that’s not failure we’re not sure what is) or generate excellence.

Coming up with ways to consolidate those 14 state universities down to nine, or eight, whether by closing campuses or merging them or setting some loose as quasi-private or fully private institutions ought to be a major priority of the governor and the legislature now that it’s obvious public higher ed has to have a lighter footprint on the state’s budget. Unfortunately, that’s unlikely to happen with John Bel Edwards in office; he’s going to try to force higher taxes on Louisiana’s job creators in order to “fully” fund the mess we have, and even in the best-case scenario what you’ll end up with is better universities sending better graduates off to Texas to find jobs and start families.

Now that Neil Abramson is a persona non grata to the Democrats in Louisiana because he voted for Taylor Barras to be speaker, two things are true. First, the Democrats have zero standing to complain about Republican ostracism of Jay Dardenne for selling his across-the-aisle endorsement of John Bel Edwards for the Commissioner of Administration position; or for that matter Republican objections to Rob Shadoin, Bubba Chaney, Bryan Adams, Joe Lopinto, J. Rogers Pope, Chris Hazel and Patrick Connick for having voted to make Walt Leger Speaker. You don’t get to gripe about partisanship when you go off the rails about Abramson’s vote the way Lamar White and the Orleans Parish Democrat Executive Committee did last week.

But second, it’s now a matter of time before Abramson flips to Republican. This is his last term in the House, as it happens, so in 2019 he’s likely to be running for the state Senate seat now held by Conrad Appel, who will be termed-out by then. The district is mostly made up of Metairie, but it has a sliver of Uptown New Orleans in it and that would include Abramson. There is no chance he could win that race as a Democrat, but with an R next to his name he’s all of a sudden a guy with a lifetime LABI score of 80 and a reputation as a corporate lawyer representing some of the state’s better job creators (Liskow & Lewis, where Abramson is a partner, represents a lot of oil companies).

Still, when Abramson flips he’s going to get called a RINO, and it’s not overly likely he’ll go in without a fight. After all John Labruzzo, the conservative iconoclast former state representative from Metairie, ran against Appel last year over Common Core and a few other Tea Party-oriented issues, and managed 43 percent against a quite popular and well-respected Republican figure; a Labruzzo-Abramson race might well be the most interesting thing we see that year.

I might well do something more on this later today, but it appears Caroline Fayard is the most likely Democrat candidate for the Senate race this fall. Fayard apparently had her political consultants floating an email over the weekend aimed at attracting volunteers and paid help to a campaign, and that’s a bit more evidence of a potential run than any of the other potential Democrats have offered to date.

Eric Lafleur, the state senator from Ville Platte, is one name which keeps popping up in discussions of which Democrat will join the race (we can be reasonably sure there will be only one, given the lesson of last year’s governor’s race for that party), as does Gary Smith, the state senator from Norco. But Fayard probably has a better line on raising money, given her father’s status as a big-dollar trial lawyer and his connections with others of that ilk.

Who knows? They might even be able to set up a Super PAC that could pay off the $200,000 or so Board of Ethics fine arising from the money-laundering operation the Fayards set up with the Louisiana Democrat Party in order to attempt to get around campaign finance limits. That fine wouldn’t preclude Caroline from running for a federal office, but it’s the reason you didn’t see her name on the ballot for any statewide races last year. A Senate race, and a Super PAC set up to go with it, could well be a vehicle for getting the fine paid off down the road so Fayard could mount, say, another run for Lt. Governor in 2019.

That Fayard might be the Democrats’ choice for the Senate race is proven by something else relatively conspicuous; namely, the fact that despite such a dearth of qualified Democrats to fill cabinet posts in the John Bel Edwards administration and some of the bottom-of-the-barrel appointments he made, she wasn’t on that list. Had she wanted a cabinet post as a resume item, her father certainly could have secured her one. Instead, she kept her options open so as to run this fall.

Which is fine. If Fayard couldn’t beat Jay Dardenne in 2010 she’s highly unlikely to beat John Kennedy, Charles Boustany or John Fleming (or whoever else) in a runoff in 2016 for the Senate. And we had a blast with the last Fayard campaign, so this next one ought to be even more of a hoot.

Interested in more news from Louisiana? We've got you covered! See More Louisiana News
Previous Article PRAGER U: Where Do Good And Evil Come From?
Next Article VIDEO: Moon Griffon Says It’s The Spending, Stupid