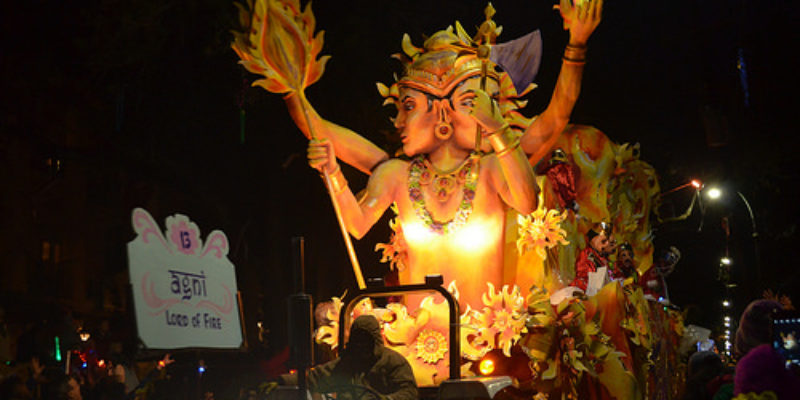 Hindus are apparently not happy with the Krewe of Proteus for the same reason that some Black Lives Matters activists want the Krewe of Rex and Krewe of Zulu to change their costumes: It’s offensive.

In a new report, Hindus have asked that Mayor Mitch Landrieu and the New Orleans City Council to not grant any permits to parade Krewes in 2017 that depict Hindu gods and goddesses, as they say it is offensive to Hindus.

Specifically, the Lundi Gras parade ‘Krewe of Proteus’ is mentioned, as it depicted “the Hindu Heavens” this year with Hindu deities such as Brahma, Vishnu, Shiva, Krishna, Lakshmi, Ganesha, Saraswati, Hanuman and Kali.

President of Universal Society of Hinduism Rajan Zed and President of Sri Veera Venkata Satyanarayana Hindu Temple in Kenner Dr. Chandrashekar Venkat said in a joint statement that Hindu deities are “highly revered highly revered in Hinduism and were meant to be worshipped in temples or home shrines and not to be trivialized in carnival type parades. Inappropriate usage of Hindu deities or concepts for entertainment and other agendas was not okay as it hurt the devotees,” according to the report.

Proteus representatives, though, pushed back against the claims, saying that “the 2016 Proteus parade pays beautiful homage to many wonderful Hindu traditions, customs, culture, deities and faith. In fact, this parade theme, design and decorations are inspired by earlier Carnival parades from years ago depicting the same subject. Proteus is very proud of its parade and the traditions it represents.”

This isn’t the first outcry this year of perpetual offended-ness.

Last week, the Hayride exclusively reported how the anti-New Orleans monuments group ‘Take Em Down Nola’ claimed that the Krewe of Rex and the Krewe of Zulu were both racist because of their costumes.

The Krewe of Zulu, however, requires members (whether black or white) to paint themselves in black paint. And the Krewe of Rex costumes are designed to mimic Southern chefs, as seen in the style of hat that riders are pictured wearing.

Increasingly, New Orleans Mardi Gras Krewes have had to deal with offended-ness pushback.

Last year, the Times Picayune published an entire report dedicated to questioning whether or not the Mystic Krewe of Druids was full of “bigotry” because of its alleged “sexist” undertones.