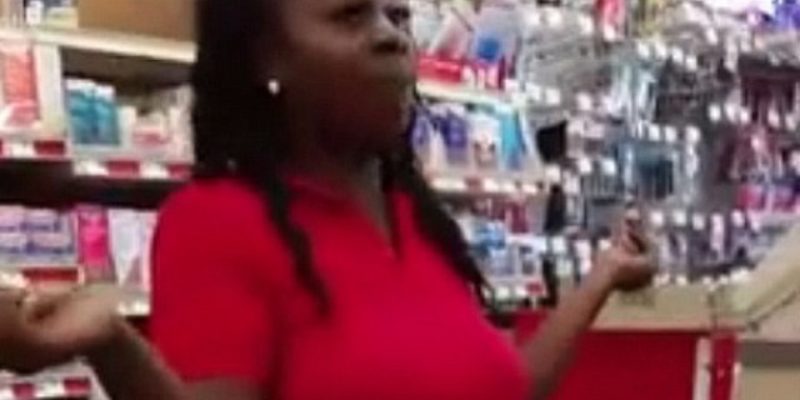 A woman by the name of Melissa Langford was shopping at a Family Dollar in New Orleans on Friday. While she was waiting in line, the cashier was allegedly going off about how she doesn’t like gay people. Langford, who is a lesbian, spoke out. Another customer in line was also standing up for gays against the cashier’s tirade. The cashier then apparently refused to serve both and even left her register so she wouldn’t have to ring them up.

Eventually, Langford was able to check out after another Family Dollar employee replaced the cashier.

Langford posted her story, along with some videos of the confrontation, on Facebook. Here’s a screen shot(WARNING: LANGUAGE): 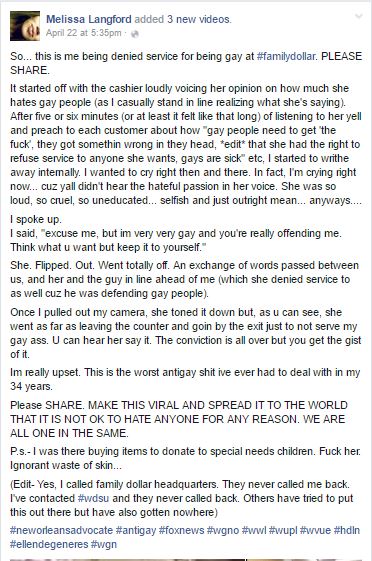 Family Dollar has told the Times-Picayune that they are investigating the incident.

“We take incidents like this very seriously. We have a Code of Ethics in place that ensures inclusion for customers and associates and helps to ensure good customer care,” Bryn, Winburn, Family Dollar’s public and media relations manager, said in an email.

“The code specifically forbids unprofessional conduct and comments on sexual orientation, among other matters. Any activity that goes against this code is simply not how we expect our stores to do business. This situation is currently under investigation.”

If Melissa Langford’s version of the story is true, I would fire this employee. The purpose of a business is to make money and gay money spends just as well as straight money. The cashier was unprofessional. Her job is to ring up items, not give lectures about how terrible gay people are.

There will likely be calls for the Legislature to add sexual orientation to the list of protected categories under the state’s anti-discrimination laws. However, Ms. Langford was ultimately served by another employee. The marketplace, as well as the employer, it seems is going to punish the act of discrimination just fine without state involvement.

As for Langford, she will be holding a “peaceful protest” tomorrow at the Family Dollar store where this confrontation allegedly took place.

PEACEFUL protest this Wednesday starting at noon, going on til ? #familydollar 2650 canal st nola. Please share this post if u have time.

Everyone is welcome. All I ask is that there is no yelling, or bad energy. We don’t even need signs. We can just blast some Cher and make out.

I imagine this protest will be as serious as it sounds. Clearly we’re in the attention seeking phase of this controversy, which is all well and good.