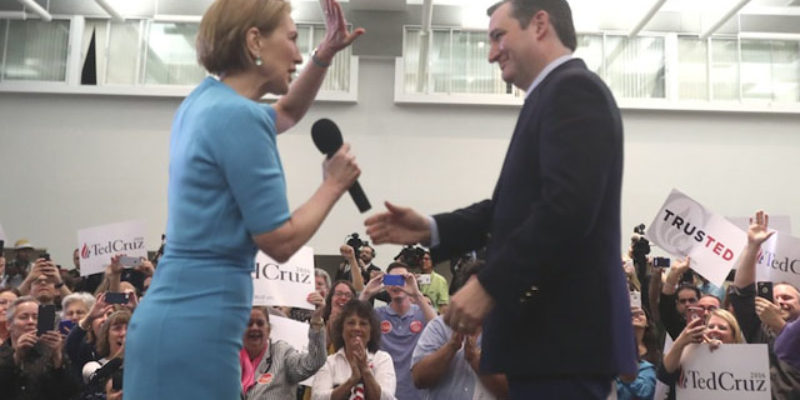 This is today’s big story, unless you want to say the incoherent, inconsistent ramble Donald Trump belched forth on foreign policy earlier is the big story. Cruz named Fiorina as his potential VP, giving her a bit of an official capacity as the surrogate she’s been for the last couple of weeks and setting up something of a vision for Republican delegates to perceive going into the convention.

The announcement has gotten an outpouring of reviews, some good and some bad. One of the more prominent reactions, though, seems to be “why Fiorina?” Lots of people seems to think a Scott Walker or Rick Perry would make more sense given that the big knock on Cruz is a dearth of executive experience like a governor would have.

The answer to the question is sevenfold. Here’s why Cruz picked Carly.

1. California – Cruz is dead if he doesn’t carry Indiana on Tuesday night, which has a lot to do with the timing of the announcement today (more on that below), but if he really is going to mount a comeback and win the nomination from Trump he’s also got to knock The Donald off in the Golden State. Fiorina might be the highest-profile and most-competitive Republican candidate in California of recent vintage seeing as though Arnold Schwarzenegger isn’t available as a VP pick (he was born in Austria, remember?); she mounted an energetic and articulate defense of conservative values in her uphill Senate run against Barbara Boxer in 2010 and she pulled 4.2 million votes (42 percent) in that race. That’s the best any Republican has done in a statewide race since Schwarzenegger, so if you’re going to win in California you need Fiorina in as high-profile a role in your campaign as you can get.

It doesn’t hurt that Fiorina has lots of Silicon Valley connections, which we’ll also talk about below. Cruz has strength in California but it’s in the southern part of the state. He needs an “in” with Republican voters in the San Francisco Bay Area. Carly can do that for him.

2. Cruz needs a female VP – Frankly, whoever the Republican nominee is will need a female VP. You’re going to be running against Hillary Clinton and that is all she will talk about, and two guys running against her and attacking her record is going to play as a Mad Men episode. Particularly where Cruz is concerned this is true, because Cruz’ message and presentation is a little wonky, a little nerdy, a little over-intellectual and it’s going to take some getting used to among female general election voters. Fiorina can help soften that image a bit without sacrificing anything on policy or ideology. She’s not particularly touchy-feely either, but on the other hand she presents herself as the kind of woman a lot of women in this country would like to be, and Cruz tapping her as his VP pick shows that he isn’t scared of a strong woman and that sex or gender just isn’t going to be the defining issue in this fall’s presidential race.

And of course, since Trump couldn’t possibly be hated more by women, Cruz throwing in with Fiorina only magnifies the importance of that weakness to Republican voters in the remaining states.

3. Generating some media buzz – Normally the candidate will choose his VP after he has the nomination locked up, but there really isn’t a better time than now for Cruz to make this pick public. He’s been getting killed in the media in the aftermath of last night’s Acela primaries, which Cruz’ camp has been saying all along they were prepared for and the delegate experts have been saying was baked into predictions which still have Trump coming short of 1237 going into the convention. The issue isn’t the delegates Trump won last night, it’s the media narrative which says the race is over. It isn’t, but things aren’t great and Cruz neds something to change the conversation. So if he’s been thinking about making Fiorina his VP it’s more or less a now-or-never phenomenon. Let the voters in Indiana get a double-dose of the Cruz-Fiorina ticket over the next six days and see if it works.

And at least today, it seems to be working. People aren’t talking about Trump’s sweep of all those Democrat states, they’re talking about Fiorina. They’ll talk even more about her if and when Trump takes a whack at her on Twitter or in some speech somewhere; if he does the Ugly Carly thing, or whatever other impolite epithet he might opt for, Cruz’ camp could well be the beneficiary of a lot of Trump’s War On Women coverage in the media leading up to the Indiana primary. As bait, it isn’t bad.

4. Best attack dog against Hillary available – If you heard Fiorina go after Hillary Clinton while she was running for president, you know this is true; she had some lines on this subject during that campaign which were fantastic. Fiorina can make the case against Clinton’s incompetence and poor fitness for office in a way no other GOP figure can; she’s a woman so when she attacks Hillary as never really having accomplished anything that didn’t spring from her husband it’s not a sexist statement – and Fiorina can say it as somebody who actually did acomplish great things in her professional life without deriving them from a marriage. She’s also got a terrific persona as an attack dog; her rhetorical style is Thatcherite with perhaps even a sharper edge to it.

There will be lots of “queen-of-mean” blowback against Fiorina, but if this is going to be a comparison between her and Hillary that’s not a problem; nobody thinks Clinton is warm or charismatic.

5. Answers the job-creator knock against Cruz – This doesn’t matter a whole lot in the general election, because Hillary has more of a record of destroying jobs than creating them and it’s not like she’s in a position to trash Ted Cruz’ economic record, but in what’s left of the primaries it does play a part. Specifically, Trump and his supporters have castigated Cruz for being a one-term senator without executive or private-sector experience, and just as Trump attacked Marco Rubio he’s gone after Cruz with the question about how many jobs he’s created. Well, Fiorina is the former CEO of one of America’s leading tech companies, employing tens of thousands of people – a lot more than Trump does, actually. She had to manage a bottom line with billions of dollars on it. With her on the ticket the question of how much business experience Cruz brings to the table gets a bit of an answer.

Now, the response might be that Fiorina got fired as Hewlett-Packard’s CEO. Sure, but if you’re going to make that case then you have to ask about the four bankruptcies Trump’s businesses have gone through, why those Trump casinos in Atlantic City aren’t owned by Trump anymore, what happened to Trump Mortgage, Trump University, Trump Steaks and the Trump shuttle. Fiorina can answer for her performance at HP, but if the attack is that she wasn’t successful in that job then the guy making it is going to have to answer for all the failures he’s had in business; it’s actually amazing that he’s managed to skate on that question as long as he has.

6. Donor relations – Cruz isn’t having terrible problems with fundraising; in fact, what has kept his campaign around while a lot of other candidates thought to be more “electable” in the early stages of the race have fallen away is that he’s been the best fundraiser of the bunch. With Fiorina, though, Cruz is adding someone who has a lot of relationships with some of the high-roller Republican backers that he so far hasn’t been able to tie to his side. Fiorina was, back in October, one of five candidates earning the blessing of the Freedom Partners Chamber of Commerce, the Koch Brothers-led network of donors who said she, Cruz, Rand Paul, Jeb Bush and Marco Rubio were on the short list; her addition to that list was seen as a surprise given her long-shot status at the time. That donor network has said it could be spending nearly a billion dollars on this presidential cycle, but they won’t be spending it for Trump; in fact, Charles Koch was quoted as saying between the two he might have to consider supporting Hillary.

With Cruz and Fiorina together, it’s possible that Freedom Partners might be induced to get involved in the remaining primaries in an effort to produce a nominee they can happily support rather than one they’d just as soon abandon.

7. Personal relationship – The most important reason for picking a vice president is the one nobody ever seems to give any credit to; namely, the president has to like and want to work with his VP. And Cruz and Fiorina clearly do like each other. You can see it when they’re together, you can see it in the way Fiorina has jumped in to defend Cruz at times since she’s joined his team as a surrogate (it was particularly palpable when Cruz was asked about the bogus National Enquirer stories of his supposed infidelity and Fiorina jumped in front of him to denounce them) and you can see it in the way they talk about each other. They’re friends, they like and respect each other, and it’s genuine.

That matters, because if Cruz can take the nomination they’re going to be crisscrossing the country as a campaign team, and if that works they’re going to be working together for the next four or eight years. A vice president who hates the president, and/or vice versa, is not much of an asset. That isn’t a problem for Cruz and Fiorina.

So that’s why Cruz picked Fiorina. Whether the choice is a hit or not, we’ll find out in the coming days and weeks. But like it or not, this wasn’t a choice that doesn’t make sense.