The Republican Convention starts in Cleveland next week, but the infrastructure for the affair is being laid down in meetings of the various convention committees now.

Perhaps the most important of those, the Rules Committee, held a marathon session yesterday in which a number of changes were debated and no good results were had.

The most high-profile of those changes was a “conscience clause,” in which the Free The Delegates movement was attempting to have convention delegates be released from any obligation to vote for Donald Trump on the first ballot if those delegates can’t in good conscience vote for him.

Free The Delegates needed 28 votes of the 112 members of the committee in order to deliver a minority report to the convention floor on the conscience clause. It received only 12, despite the presence of highly-respected Sen. Mike Lee, who was on the committee, among its proponents.

While the anti-Trump forces vow to take the fight to the convention floor, the odds that anything of note will result from that effort are minimal. Trump is the nominee; anti-Trump Republicans must either make their peace with that or leave the party, at least where the 2016 presidential election is concerned.

And the pro-Trump forces don’t seem to have either the will or the skill for the former. Here was an e-mail sent by Carl Paladino, the failed Republican candidate for governor of New York and a prominent Trumpster in Cleveland, to anti-Trump delegate Stefani Williams…

You should be hung for treason Stefani. There will not be a Republican Party if you attempt to replace Trump. I’ll be in your face in Cleveland.

Paladino is known to be an associate of Trump’s fixer and political hit man Roger Stone. He had previously threatened to “whack” any delegates who went “off the reservation.”

This is not to suggest that Free The Delegates lost in the Rules Committee because Paladino threatened anyone’s life. The fact is, as Mike Bayham notes here at the Hayride, the Trump nomination was decided in the primaries.

But it is an illumination as to the character of the dominant element in the Republican Party today – angry, authoritarian, anti-intellectual, and possessing all or at least most of the characteristics of a cult of personality.

What is instructive is the lack of argument made on Trump’s behalf by his own people. Engage in or observe a debate over Trump involving his supporters and you’ll find, mostly, variants of “Hillary is worse, and if you don’t support Trump you’ll elect her.” You won’t find much of a positive, informed advocacy of specific goods Trump brings to the table.

And without that, there will be no unity.

Trump is actually having the best week his campaign has had since taking the Indiana primary. Clinton is in free-fall thanks to the damage inflicted on her by the denouement of her e-mail scandal and the obvious fix put in by the Obama administration to keep her from being indicted. And yet, outside of the outlier Rasmussen she’s still ahead of Trump in national polls. He has a lead in a few battleground state polls but he’s also behind in other states which are reliably Republican if the party’s nominee has any hope of overall victory.

That’s in Trump’s best week. The outrage over Hillary’s e-mails will fade; the media will insure that. And Trump’s inability to run a paid media campaign to keep that outrage going, an inability which comes from putrid fundraising (a natural outgrowth of his conning his primary supporters into believing he would self-finance his campaign), means there is no reason to believe things will get better.

And his supporters will complain, as McCain’s and Romney’s did before, that Trump lost because Republicans wouldn’t unify behind him.

Maybe they just need more Carl Paladino e-mails rather than a better nominee.

– In the aftermath of the slaughter perpetrated by a jihadist monster in Nice last night, a battle cry by Michael Walsh at PJ Media…

What’s past is prologue. From time to time, the Western powers undertook punitive expeditions against fanatical Muslim irruptions, such as Kitchener’s demolition of the Mahdi’s forces at Omdurman in 1898, in revenge for the sack of Khartoum and the death of General Gordon 13 years before. Gordon, one of Britain’s greatest heroes, had earlier been instrumental in stopping the Arab trade in black African slaves, and was tasked with helping Khartoum’s garrison of Egyptian Ottoman Muslims return to Cairo at the time of his death.

Islamic military prowess is long in the past; the West has not suffered a major defeat in any confrontation with Islam on the battlefield since Saladin expelled the Crusaders from Jerusalem in 1187.  But pitched battles between great armies are no longer the confrontation of choice. As Nice, Paris, Orlando, San Bernardino and everywhere else a “holy warrior” has self-detonated have shown, the war has come to the streets of western cities, unpredictable in its timing and ferocity. And yet still the West refuses to take even the most rudimentary steps to protect itself against a known, sworn enemy. Why?

Lots of reasons: ennui, cultural Marxism, the mutation of the Left into a suicide cult that wants to take the rest of us with it. A loss of faith in organized religion (some of it brought on by the faiths themselves, or rather the imperfect men who represent and administer them). The transformation of government schools into babysitting services for subsections of the populace with severe cultural learning disabilities, no matter the skin color of the pupil. The marginalization of the very notion of excellence. And a political class that is little more than a collection of criminals, throne-sniffers, pantywaists and bum-kissers, all dedicated to their own enrichment.

And a punch line…

Western civilization has defended us for centuries. Isn’t it about time we defended it?

– Bernie Sanders got in line behind Hillary Clinton this week, which proves that for all his bluster about a political revolution he’s little more than a fraud.

Or better put, this… 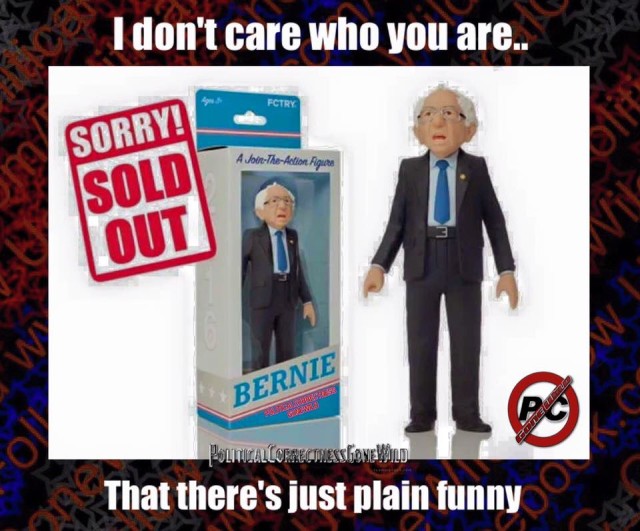 – My American Spectator column this week is about the Black Lives Matter cabal, and how it makes a mockery of the civil rights movement which preceded it…

And who are the people leading the Black Lives Matter movement? Well, one leader is the comical Shaun King, a white man posing as black until he was found out as a fraud. Then there is Jonathan Butler, an affluenza-infected son of a railroad executive who parlayed a half-assed hunger strike into a cause célèbre, destroying the marketability of a University of Missouri education and springing himself onto the rubber-chicken circuit as a paid speaker. Another is DeRay Mckesson, a Twitter impresario and cable news bomb-thrower who parlayed rabble-rousing in Ferguson and other areas stricken with racial strife into a$165,000-per-year gig as a community organizer for Baltimore’s bloated and poor-performing public schools. Mckesson, who lives in an 8,000 square foot house owned by board members of George Soros’ Open Society Institute, made his way to Baton Rouge last weekend for the Alton Sterling protests and promptly got himself arrested for attempting to lead a mob onto an interstate highway packed with 18-wheelers.

After being sprung from East Baton Rouge Parish Prison, Mckesson cut loose with a torrent of tweets that, sadly, don’t quite measure up to King’s Letter From a Birmingham Jail. Among his observations — the orange juice served at the jail was “grainy,” the lights were always on, his charges weren’t dropped, and some of the sheriff’s deputies were snarky toward the protesters who had been arrested. Released on Sunday afternoon after his arrest on Saturday night, Mckesson then attempted to lead a mob onto another interstate onramp, where he was rebuffed by police again — though it seems he was spared another evening of persistent fluorescent light and another morning of OJ not pleasing to his palate.

Mckesson’s week improved after his failure to block one of America’s busiest commercial corridors; by Wednesday he was feted for three hours at the White House.

Such is the descent of the civil rights cause — from a man of remarkable, though perhaps imperfect, character in King whose message was that of truth, justice, love and peace, to a collection of liars, fools and spoiled children. The march on the Selma Bridge wasn’t intended to shut down traffic, it was an attempt to go from one place to another — and those arrested there went willingly, as they knew the price of civil disobedience and showed their strength in the resolve to pay it. Today Selma’s legacy is tarnished by a collection of special snowflakes who bitch and whinge about a night in jail after attempting to shut down interstate highways — and why? To protest the statistically insignificant and usually defensible police shootings of the Mike Browns of the world as they resist arrest?

– And then there is this…

It appears as a poorly-coded android attempting to mimic human personality. This is the effect one can expect by mixing vodka with the right combination of pills.

– Finally, Today’s Last Thing. Which is the best news story ever…

They left for what they thought would be an easy float down Muskegon River Tuesday afternoon – but ended up spending the night on the river bank, scared and yelling for help.

The women, all in their 20s, had never been tubing before and decided it would be a fun thing to do, Grabinski said. So they bought some tubes and headed to the popular launch site at the Maple Island Road bridge, Grabinski said.

“They were informed by somebody at the bridge that the river goes in a circle and if they put in there they would come back to their car,” he said. “Not knowing anything, they set off on their little adventure.”

About six hours later, with darkness closing in and their car nowhere to be found, the trio decided to get out on the riverbank where they ended up spending the night, Grabinski said.

“They said they hugged a tree all night yelling for help,” he said, adding that that stretch of river is very isolated.

And now for the punch line…

Other than a few bug bites and scratches, the women were fine, Grabinski said. He estimated they had traveled roughly 3 miles.

There were no bicycles available for the rescue operation. The fish had taken them all.