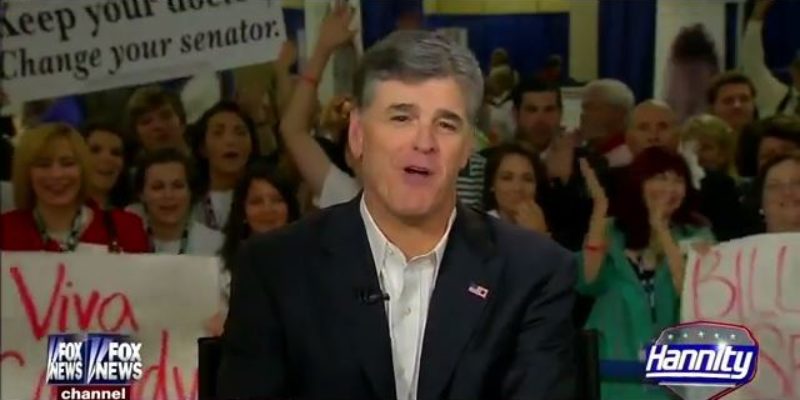 The phrase “never let a crisis go to waste” is often associated with the Obama administration. But in the aftermath of Louisiana’s flooding, that’s just as applicable to many in the “conservative” media.

Many conservatives in the media have decided that they have an issue to discredit President Obama and the national media on. One of those idiots is Mike Huckabee who posted this on his Facebook page.

How’s the vacation going on Martha’s Vineyard? Pretty swell place for sure. Ocean breeze, beautiful homes, and packed out with America’s top 1% of the 1%—you must be in your element.

And golf? I’m sure you’re playing so much golf, you’re getting almost tired of it. But then, you never tire of golf. You just seem to tire of that “Presidency thing.”

My neighbors in Louisiana aren’t having it so good, Mr. President. They are underwater—again. Historic floods that have impacted or destroyed 40,000 homes and left thousands of families homeless are sure ruining their hopes for a summer vacation this year. Probably will take away hopes for a summer vacation next year as well. Their once nice homes are now waterfront property. In fact their homes don’t just front the water—they are IN the water and the water is in them.

I realize that in the hustle and bustle of golf, having ice cream, and strolling the quaint streets of the Vineyard you may not have noticed this catastrophic natural disaster. And because you have paid so little attention to it, sadly not many Americans have either.

It’s one reason that when a apocalyptic event like a flood, tornado, or hurricane happens, Governors and Presidents show up. It’s not because their presence can make the water recede (although I do recall you saying something back in 2008 about how nature itself would respond to your election), or pick up the shattered splinters of a home, or recover the lost personal effects a family will never get back. I know this because in my 10 1/2 years as Governor, I walked through many flood waters, stepped over fallen trees during ice storm, held in my arms a weeping widow whose husband was killed shielding her from the fierce and unforgiving winds of a tornado.

I wasn’t there because I could singularly “fix it.” I was there because my presence brought attention to the crisis that my absence wouldn’t have. The news crews who went because I did caused churches and inviduals to see the devastation and it mobilized them to action. It gave voice to the victims, and it let those whose lives were irreparably changed know they were not forgotten. It also drove home the degree of devastation to me, and gave me a greater sense of urgency to marshall all the resources of my state to help in the recovery.

President Clinton—you know him, right? He plays a lot of golf too, but when major disasters struck, President Clinton came. Natural disasters aren’t political. And elected officials shouldn’t be either in the midst of one. I personally walked, drove, and flew through many scenes of human tragedy with President Clinton. Whatever our political differences, he understood that his presence, like that of the local Governor, was reassuring to people who will never know the sweet seabreeze of Martha’s Vineyard. Right now, some of your citizens only smell the stench of a flood’s aftermath—rotting fish and animal carcasses, growing mildew inside homes, and floating sewage that comes as treatment plants involuntarily discharge their waste because of the rising water.

Maybe if it rains in Martha’s Vineyard and you have to cancel a golf game, you might fire up ol’ Air Force One and venture down to check on my friends in Louisiana. I know it will make it there, because it’s taken you and the fam all over the world on some pretty nifty vacations. I don’t begrudge you those vacations, by the way. You need them. But Louisiana needs you right now. Not because you can personally fix it, but because you showing up means a lot of resources will show up as will the cameras to help the nations see how bad it is.

Yes, I’m a partisan Republican when it comes to politics, but this isn’t about our politics—it’s about our people. President Clinton would have already been there. I know there are some things about his Presidency we don’t want you to imitate. But showing up when Americans are hurting would do you and the country some good.

Not to be outdone, Sean Hannity posted this meme on his Facebook page: 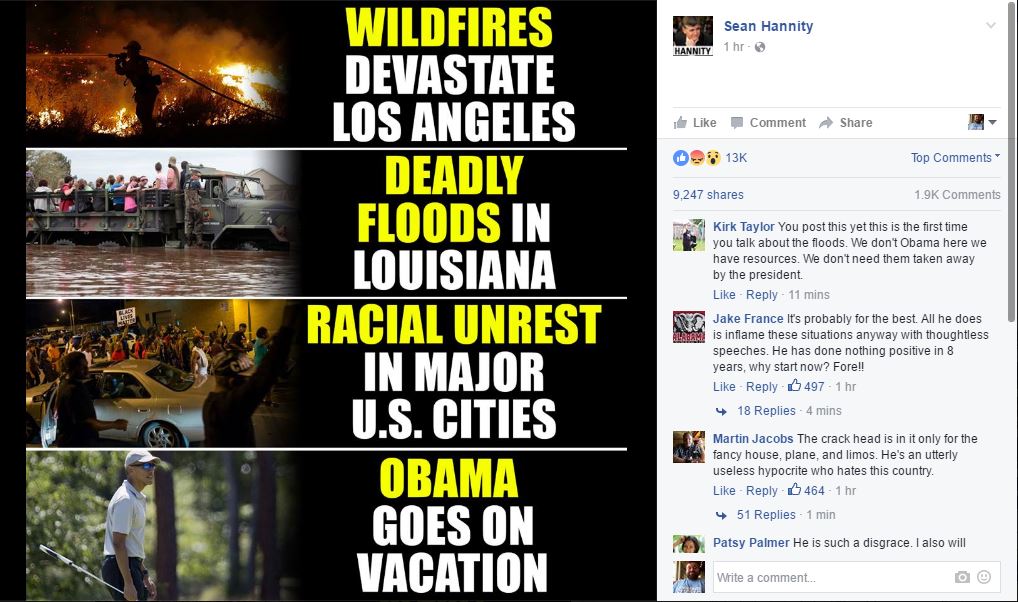 Sean Hannity is such a moron he doesn’t realize the California wildfires are in northern California, not Los Angeles. But I digress.

Besides it’s not like President Obama is ignoring Louisiana. FEMA Director Craig Fugate was in Louisiana earlier this week. Homeland Security Secretary Jeh Johnson is in Louisiana right now.

Barack Obama has paid more attention to Louisiana’s suffering than Donald Trump has. This state voted for Trump in the GOP primary, where the hell is he? Actually, we’re not really interested in what Trump has to say. There’s nothing he can do in any event.

These people who are using this flood to push their own petty political agendas don’t care about Louisiana. We are being exploited for hits, ratings, and attention by people who couldn’t find Denham Springs or St. Amant on a map. If they cared about Louisiana, they would be mobilizing their vast audiences to help Louisiana flood victims as we have done.

This flood has taught us that the national media, both “mainstream” and “conservative”, don’t care about Louisiana. They only care about this state when we fit their preconceived narrative. The only people Louisianians can count on are our neighbors and each other.

Which is actually fine. We don’t need a president serving as national mommy and daddy anyway. Or a self-absorbed national media for that matter.