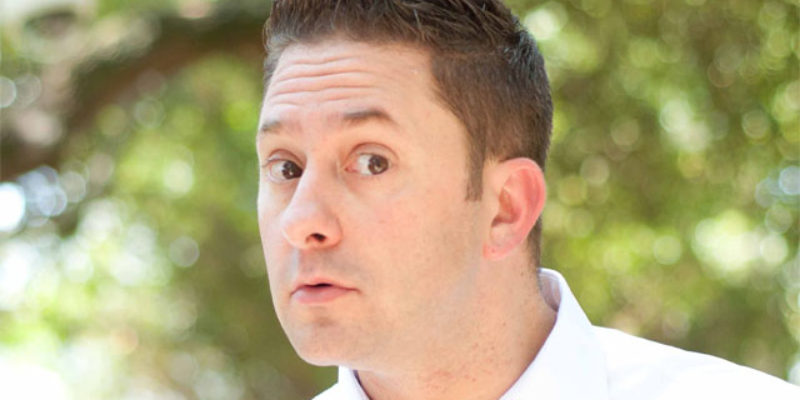 …and even worse than that he needs a good political consultant.

A good political consultant is going to tell Perry that “if you’re explaining, you’re losing.” And he’s doing a whole lot of both right now.

Our readers by now know most of the story here. Perry is the state senator who last week floated the bad idea that because in a few isolated cases there were local law enforcement folks and/or Department of Wildlife and Fisheries wardens who prevented Cajun Navy volunteers from rescuing flood victims amid the disaster in South Louisiana two weeks ago, Louisiana needs legislation to certify and institutionalize the Cajun Navy. His original idea was that those volunteers ought to take some sort of boat rescue safety course and get a certification which would grant them the privilege to save their neighbors amid a flood no matter what the Barney Fifes in local law enforcement might think, and he also offered up the idea that maybe there ought to be a waiver these guys could sign which prevents local law enforcement from being liable for injuries that might result from “unqualified” volunteer rescue attempts.

This was met with fairly large-scale opposition from the public, if not ridicule. Here at the Hayride, Kevin Boyd had a pretty good post, which got an enormous amount of traffic, decrying the idea that the government would attempt to regulate the Cajun Navy.

As a result, earlier this week WWL-TV’s Meg Farris contacted me about doing a segment for their Tuesday 5:00 newscast on Perry’s zany plan, and I did – along with Dustin Clouatre, one of the more decorated Cajun Navy veterans with 140 souls saved under his belt, and Clouatre was less than enthused about what Perry had to say.

Perry then went to Facebook and cut a three-minute video explaining that his intentions are to promote the Cajun Navy, not hinder it, and that people are putting out “misinformation” on his proposals.

We responded to that Wednesday, stating the obvious fact that regardless of his intentions his idea stinks, that the unintended consequences just boil over out of an idea like he has, and that he’s sure to get less of that which he seeks to promote by trying to make the Cajun Navy a semi-pro organization when at present it isn’t even an organization at all, just an unorganized group of good people with small boats who are willing to help amid a disaster.

But that wasn’t the end of this mess.

I was accosted yesterday on social media by defenders of Perry, including KPEL-FM news director Bernadette Lee, who demanded to know why I hadn’t called Perry to interview him about his proposals. My response was that when he cuts a three-minute Facebook video to explain himself, on top of having done a lengthy radio interview to introduce his ideas, an interview isn’t really all that necessary – Perry speaks English and made himself fairly well understood, so I’m taking what he’s said and analyzing how his ideas will perform in practice and it’s obvious they’re unworkable.

But I wasn’t the only one KPEL has been blasting. They went after Meg Farris as well, complaining that she didn’t get Perry on camera for her segment – which, after it was posted on WWL-TV’s website then went national, as USA TODAY picked it up.

Meg, as you might imagine, was less than enthralled by this. Particularly since she did everything she could to get an interview with Perry. And after KPEL put up a post trashing her for not interviewing Perry, she decided to shoot back a little.

We’re stealing all of this, because it’s just too good not to…

In a KPEL report, Louisiana State Senator Jonathan Perry told reporter Brandon Comeaux that WWL-TV never called him before our stories aired, during the 5 p.m. newscast on Tuesday, August 23, about regulations on the ‘Cajun Navy.’ However, Mr. Comeaux never called to confirm if that was true.

On Tuesday, August 23, I called his office at 10:21 a.m. and spoke with the administrator for one minute and 55 seconds. I told her my name and what the story was about and that I would be traveling to Baton Rouge to interview members of the ‘Cajun Navy.’ I asked if Senator Perry would be in the Baton Rouge area. She told me that he would not and would be in Vermilion all day. I told her that we could do our interview by phone. She said she would tell Mr. Perry and get back to me.

When I did not hear back, I called again at 1:02 p.m. and left a voice message. The call log shows I was on the line for one minute and 36 seconds. During the message, I explained my 5 p.m. deadline and requested a phone interview with Senator Perry. I got no callback.

We decided to use an interview Senator Perry did with radio station KPEL on Wednesday, August 17, 2016 to make sure he was represented in the story.

Later that evening, WWL-TV web team transcribed the Facebook video and embed it into the web site’s story.

On Wednesday, August 24, I was assigned a follow-up story for the 5 p.m. newscast and called Senator Perry at 11:32 a.m. and left a voice mail requesting an interview. The call lasted one minute and 38 seconds. I told his office that we had seen his Facebook post and would use that information and video in the story but that I would like to give Mr. Perry a chance to answer questions, but I did not hear back.

After seeing the KPEL article stating that Mr. Perry claimed he was never called for his side of the story, I called his office again at 7:18 p.m., Wednesday, August 24, and I left a message that lasted two minutes and 41 seconds. We were also doing a 10 p.m. newscast edition on the story and again I wanted to give him the opportunity to comment.

I also expressed concern over Senator Perry’s claim that we never called for his side of the story.

We concluded to using Senator Perry’s Facebook video and interview with KPEL to show his side of the story.

Note: During all phone calls, the photojournalists covering the story were present and heard the conversations.

I can attest that Meg is telling the truth, because when we got together Tuesday for the interview she made copious mention of the fact that she really wanted to get Perry on camera, or at least on the phone, to tell his side of this – but that he didn’t seem willing.

I almost wonder whether this is one of those Lafayette things; Perry will go on KPEL all day long and repeat his mantra about trying to help the Cajun Navy but isn’t interested in being interviewed by somebody in a larger media market. Add in an element that Meg Farris somehow represents the “liberal media” when she’s never had that reputation and what Perry has offered which has him under so much criticism is anything but a small-government conservative idea, and this thing has become totally irrational.

Not to mention the fact that we’ve got some pretty bad lawyering, as well as even worse legislating, going on. Kevin has a post up today noting that WWL’s legal expert Chuck Foret says the Cajun Navy’s exploits are already immune from suit under Louisiana law. Our pal Dan Miranda, who’s also a lawyer, expanded on this in a comment under my Wednesday post that’s worth repeating…

If the intent of the legislator is to “unregulate it [the Cajun Navy],” the proposal at issue to unregulate necessarily involves legislation and regulation through licensure. According to the legislator, the two things the state is worried about are “liability and cost.” If he wants to pass a law, then he should pass a “Good Samaritan” law.

That means the issue is that the legislator is concerned the local or state official is worried about his or her own, or the government’s liability. That’s really absurd, but if it is really necessary, then there’s a pretty simple fix. Amend the Good Samaritan law to say that the state and local governments are not liable for the acts of anyone performing an emergency rescue. Although I cannot imagine how the state or municipality could be vicariously liable for such an act.

It seems like this is yet another proposed solution to fix something that is not a problem.

That’s a pretty devastating response, and one wonders how many more times Perry is going to go on KPEL’s air or make Facebook videos trying to explain something we all understood the first time.

If you’re explaining, your losing – particularly when everybody understands you perfectly and still disagrees. He needs to stop digging that hole and shut up for a while if he doesn’t want to do himself permanent political damage.

Interested in more news from Louisiana? We've got you covered! See More Louisiana News
Previous Article Jonathan Perry Must Be The Dumbest Lawyer In Louisiana Because The Cajun Navy Already Has Immunity
Next Article BAYHAM: Could Two Democrats Make The Runoff In Louisiana’s Senate Race?