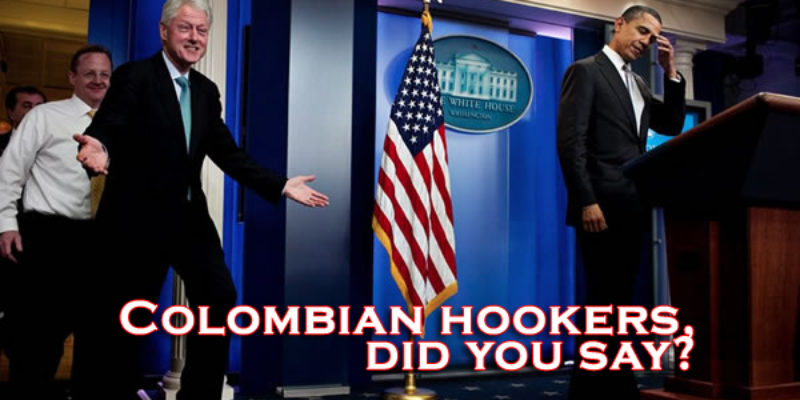 Charles Boustany has been under fire with his own “hookers” trouble. Monday’s “Hither And Yon” had a full recap of the latest hookers’ episode, but John Kennedy has been exploiting it while not looking like he exploits it.

Boustany thinks he knows which of his rivals has been shopping the hookers story and it’s Kennedy.

“The allegations made about me by Ethan Brown and spread by the Kennedy campaign are wholly and completely false. It is all total lies – and everyone, even John Kennedy, knows it,” Boustany said in a news conference that marked the first time the Republican personally addressed the issue.

“John Kennedy is the only candidate who has spread this false story against me. His staff was sending it to people all over Louisiana instantly after it appeared online. Many of you were the recipients of calls, texts, and emails from his staff and associates shopping this story. His Campaign Manager was exposed in a story in The Advocate last night admitting to peddling these lies,” Boustany said.

Kim Allen, Kennedy’s campaign manager, had texted a link to a news story about the book’s allegations to an elected official, saying: “Not sure what this is all about but wanted to make sure you saw it.”

Asked by The Advocate for comment, Allen emailed Tuesday, “I send published news stories about Louisiana every day to interested parties.”

I know both Kim Allen and Lionel Rainey, I’m offended neither of them texted me or emailed me about the story.

But it wouldn’t make sense for the Kennedy campaign to leak the story. Kennedy would have to love his chances in a runoff against Charles Boustany, even without the hookers’ story. All John Kennedy would just refer to Boustany as “Congress” and “Washington politician” while Boustany would be scrambling to hit Kennedy on whatever he could come up with.

All John Kennedy would do is just refer to Boustany as “Congress” and “Washington politician” while Boustany would be scrambling to hit Kennedy on whatever he could come up with. Kennedy would just simply defect Boustany’s attacks in that whole grampa Kennedy thing he does while he twists the knife in Boustany. Kennedy would actually love his chances in a 1 on 1 against Boustany.

Now there are some people who would be more motivated to leak the story. The two people who would wish Boustany ill in his Senate primary the most are Foster Campbell or Caroline Fayard. It would not be below either one to originate the hookers story and it would benefit them more than Kennedy.