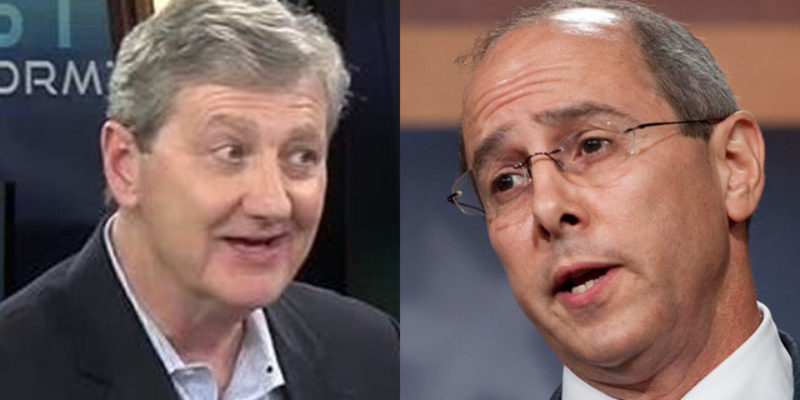 The latest Southern Media and Opinion Research survey will be out Wednesday morning, but the Advocate managed to get a preview of it and released the results Tuesday night. Those results look less than good for the frontrunner in the race, Louisiana Treasurer John Kennedy.

Kennedy, who two weeks ago had a comfortable 11-point lead over his nearest competitor in the Hayride/Remington Research poll, has no such margin now. And hot on his heels is a candidate his camp would have figured to be falling away fast in the wake of recent events.

Last week, the fascinating book Murder In The Bayou (the author of which, Ethan Brown – a native New Yorker who’s been living in New Orleans since 2006 – was a guest on this week’s episode of The Red Bayou Show) was released, and there were some interesting allegations made in it. According to Brown’s reporting, the locus of the criminal activity in the Jefferson Davis Parish town of Jennings which essentially led to the murders of eight prostitutes in that town was a flophouse motel (if you could call it that) called The Boudreaux Inn, and during the time most of the murders occurred the proprietor of the joint was a man named Martin Guillory. Guillory, or Big G as he was known, was working for Boustany at the time as his field operative in the black community; he had that job from about 2003 until recently.

And according to Brown Guillory’s flophouse was a hive of drugs, prostitution and violence; most or all of the murdered prostitutes apparently plied their trade there. Also according to Brown, there are witnesses who place Boustany there as a visitor on more than one occasion and further, at least one says Boustany was a client of one or more ladies of the evening at that establishment.

Boustany has hotly denied the allegations in the book, and made the insinuation that Brown was recruited to slime him by one or more of his opponents – something Brown denies just as hotly and, in the podcast Tuesday supported his contention by noting he has been investigating the Jeff Davis 8 murders since 2011, and had written a long-form piece for a national publication about the case in 2014, about the same time that the HBO miniseries True Detective, which covered a fictionalized version of similar events, was focusing attention on it. But while that accusation was likely off the mark Boustany’s focus on Kennedy as the primary promoter of the allegations was not; Kennedy actually advertised himself as such by laying into Boustany with a denial of involvement in producing the allegations that magnified and promoted them. This occasioned an even hotter condemnation by Boustany, and in turn a declaration by Kennedy that the Murder In The Bayou allegations are fair game and can be discussed at any time of his choosing.

All this was going on while Pinsonat was polling the race last week.

Pinsonat said this poll doesn’t chart much of the public’s reaction. But he doubts the charges will have much impact unless the allegations receive more media coverage or are used by Boustany’s opponents. “Politicos are talking about it, but I’d be surprised if 10 percent of the public knows about it,” Pinsonat said.

It’s hard to say whether that’s true or not – to the extent it isn’t, the lesson could be that Kennedy’s promotion of the book’s allegations has backfired. It might be that the public is hookered-out after hearing the ad nauseam attacks about David Vitter’s old baggage along such lines last year and simply refuses to let dirt like this affect their votes, and perhaps Kennedy’s downward trend in the polls could reflect a negative reaction to his use of it.

Or Pinsonat could be right and if Kennedy wants to beat Boustany down with TV ads bringing the allegations to light that might be the only way the mass of the state’s voters even know about what’s in the book. But if he invests a big chunk of his war chest in such ads for the primary seeking to bounce Boustany and install a short-stacked and beatable Democrat like Fayard or Campbell as a runoff opponent and they do backfire, then there’s an excellent chance Kennedy may have blown the election.

Either way, if Pinsonat’s poll accurately reflects the state of the race things have changed since the summer; Kennedy is no longer coasting to victory and his chances of winning could ride on a decision which will either win or lose him the race.

Interested in more national news? We've got you covered! See More National News
Previous Article Obama Disgraced Himself At The UN Today, And Ted Cruz Stuck It To Him In Response
Next Article AUDIO: Michael Berry On Hillary Clinton And Urban/Police Shootings