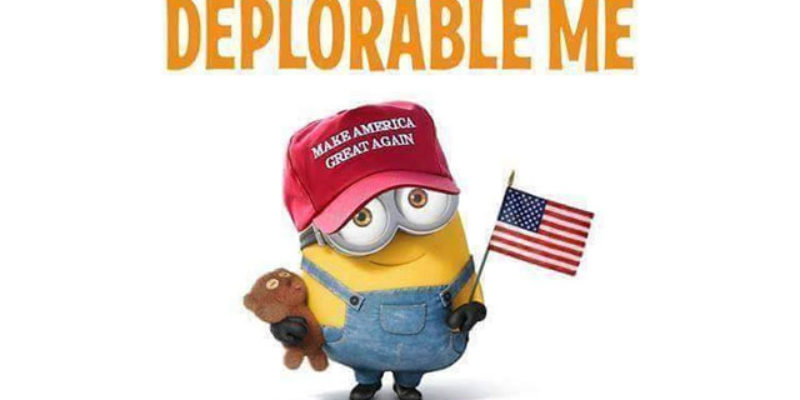 We’ve got a few thoughts on this, which will follow after the ad…

Is it a good spot? It might be. Certainly the underlying quote giving rise to the ad needed a response, because it was one of the stupidest, most arrogant things a presidential nominee ever said during a campaign – and for all the fire we’ve laid on Trump during this cycle, and for good reason, we can’t think of anything he’s said that was quite so stupid as this.

To essentially call 20 or 25 percent of the country, which is what “half” of Trump’s supporters constitutes based on the polls, “deplorable” people is so manifestly a declaration that she doesn’t seek to be their president as to make your nose bleed. Much was made of Mitt Romney’s disastrous “47 percent” remark, and in Romney’s defense probably too much was made of it. What Romney was saying when he talked about the 47 percent of the American people who don’t pay federal income tax is that you’re not going to move the needle much with them by talking about cutting taxes, and he was right – and given the audience, which was a small group of well-heeled donors in Florida, it wasn’t necessary for Romney to offer an equivocation about how most of that 47 percent DOES pay payroll taxes, sales taxes, property taxes and other things. But once the media got hold of the video of Romney speaking to those donors they blared his statement as a “makers vs. takers” thing and it crippled him.

This is worse than that. Hillary wasn’t on a hidden camera, she was on C-SPAN. And she wasn’t talking policy, she was talking identity. She was diagnosing who Trump’s supporters are, not what policies might attract them. And she was attempting to move the chains on something she had begun saying at the Democrat National Convention in July; namely, that traditional conservatives are being put out of the Republican Party by Trump and the alt-right and the rest of the neo-nationalist crowd, and that she wants to appeal to them.

But she isn’t talking about policies that would appeal to traditional conservatives. What she’s doing is attempting to shame them out of the Republican Party by playing up the “basket of deplorables” the rest of Trump’s supporters belong in.

And that in itself is pretty deplorable. First off, Hillary doesn’t get to diagnose the Republican Party after calling Republicans her “enemies” all these years, and she certainly doesn’t get to appeal to Republicans on any basis of principle given her demonstrated lack of integrity and thorough record of leftist activism. The only thing that unites Republicans is blood-red hatred of Hillary Clinton; whoever cooked up the idea that it’s good politics for her to appeal to some Republican voters by trashing other Republican voters as Deplorables probably also thinks it’s a good idea to tell Muslims that jihadists aren’t Islamic. It’s a demonstrably stupid appeal. If you want to appeal to traditional conservatives as a Democrat presidential nominee you’re a lot better off picking a few conservative policies – reforming Obamacare by allowing health insurance across state lines or loosening the restrictions on eligibility for non-employer based group insurance, for example, or some sort of tax simplification that Democrats can live with – than to try to stir up intraparty turmoil within the GOP this close to an election.

But more importantly, applying a list of isms and phobias cooked up in a Critical Theory lab somewhere to a wide swath of people in order to make them the Other is just a blatantly un-American thing for a presidential candidate to do. You’re a racist so you belong in The Basket Of Deplorables: what constitutes racism? Is Harry Reid racist? Is Bill Clinton? What about the Black Lives Matter folks? Or are you only eligible for racism if you support Trump? Who determines whether a Trump supporter is a racist, or a homophobe, or a xenophobe, or a sexist?

What’s so bad about this is the shining, if implicit, assumption that the faculty-lounge labels laid on the politically incorrect somehow have legitimacy. In Hillary’s world that’s been true a long time, of course, but the real world is a lot larger – and it doesn’t work that way. What she’s just said is that if you don’t subject yourself to the stilted, intolerant and bizarre regimen the cultural Left demands, you are not free to support the presidential candidate of your choice without being socially untouchable.

This is something a large portion of the American people – I would say a majority, depending on how the question is framed – simply can’t and won’t abide. Trump is in this race almost solely due to the country having had its fill of political correctness, and “basket of deplorables” is not going to fly. It’s little wonder she backtracked on that stupid statement before fainting on Sunday and creating a totally new crisis for her campaign.

But all that said, does the ad work?

Well, it isn’t likely to move a lot of voters from Hillary to Trump. That’s probably not possible anyway. Where playing on the “deplorables” gaffe could help Trump is to motivate turnout for him among “deplorable” voters, perhaps bring a few traditional conservatives across who have heretofore adhered to the Never Trump stance – as someone who probably fits in or near that camp myself, I can say that nearly every day I see of Hillary the more persuadable I become even though Trump repulses me as well – and drive Hillary’s approval rating downward. That last part could be important because right now Trump’s number one goal has to be to make the public believe Hillary is not inevitable as the president. A month ago, two weeks ago…that was a difficult sell. Now, it’s definitely less so. Playing up such a major gaffe has value in showing the public that she can lose this race, which makes independents and others who think both candidates are terrible perhaps think twice before just voting for Hillary because she’s going to win anyway.

So yeah – it’s a good ad. If Trump’s campaign has the money to run it in swing states targeted to voters who probably see themselves in Hillary’s little basket, it could well fire up the base and bring over some folks who needed the sale closed with them.

And Hillary can’t complain about the effects of the ad, whatever they might be. Her stupid mistake served them up to Trump on a silver platter.