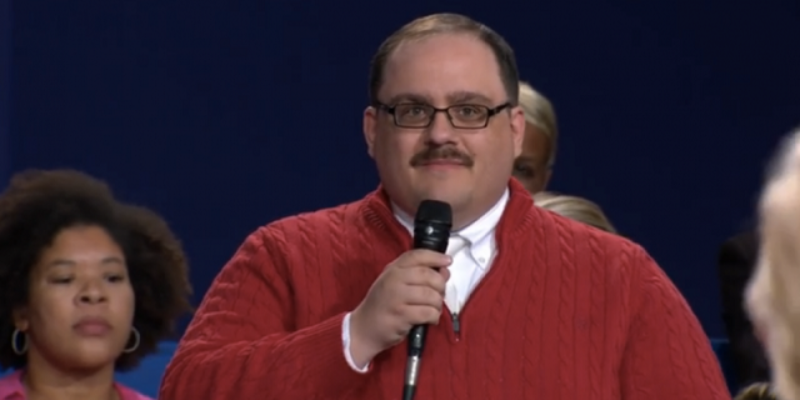 That led at least one news site, Uproxx, to write it up as a legitimate news story.

This is some glowing praise from a former major leaguer. We’re two days into this and there hasn’t been a negative story from Ken Bone’s past, like he was once arrested for stealing peanuts at a circus or he’s delinquent on library books. He’s shaping up to be the No. 1 Halloween costume this year and there’s no stopping him.

What I can’t get past is the fact it’s mid-October and this Ken Bone fella remains undecided. Is he like that in real life? Like, when an LSU player’s glove broke in 1992, did Ken Bone stare at the gloves and bats for an hour trying to decide which the player needed at the moment? Did he ask a question to the manager in front of the whole team? “Hi, I’m Ken Bone, and my question is about equipment.”

The LSU coaches are having fun with this.

.@Cannizaro11 there's a documentary coming out on how he started the Championship Gold Jersey's

He is still talked about daily in these hallways. Always came to work with a smile on his face, attacked each day with a purpose. https://t.co/rJj7SDEzUa

@Cannizaro11 Warren Morris looked at him and said, "Pick me out a winner, Bonesy" before his walk off homer

Of course, Ken Bone never worked at LSU and as far as we know has no Louisiana ties at all. This was the LSU baseball coaches having fun.

Clearly, Ken Bones did not work at LSU, merely enjoyed watching him at the debate. #OleBonesy

In this otherwise depressing election year, we need something to give us hope. Right now it’s Ken Bone, even Trever Noah at The Daily Show agrees.