…and it’s a pretty good one.

NBC had tape 11 yrs. Apprentice producer says they have more & worse. So why not release in 2015? In March? Why wait till October? #MSMBias https://t.co/WCEEHhZKd6

This gets to another question which is going to be batted around a good deal in coming weeks – it’s already been discussed quite a bit already.

Namely, what role did the Democrat establishment and its allies in the mainstream media play in foisting Donald Trump onto the GOP as the party’s nominee, and if that role turns out to have been significant what effect does the ability of one party to pick its nominee’s opponent have on American democracy?

This is no small question. After all, one product of Friday’s Wikileaks dump, which was completely washed away by the release of Trump’s “grab her by the p***y” video, was a trove of documents which cast some light on the level of meddling into the GOP primary the Democrats engaged in.

Specifically, there was a memo attached to an email sent by Marissa Astor, Clinton campaign manager Robby Mook’s assistant, to Clinton campaign chair John Podesta in advance of an April 24, 2015 strategy call. The memo can be found 150407-strategy-on-gop-2016ers-wikileaks-dnc-memo, but we’ve put it into images… 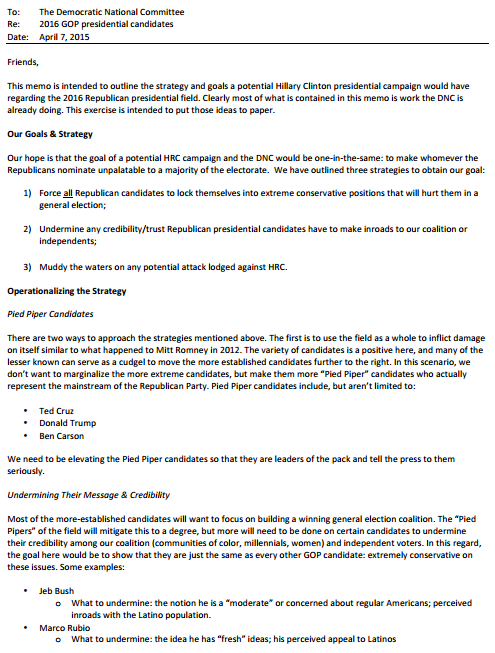 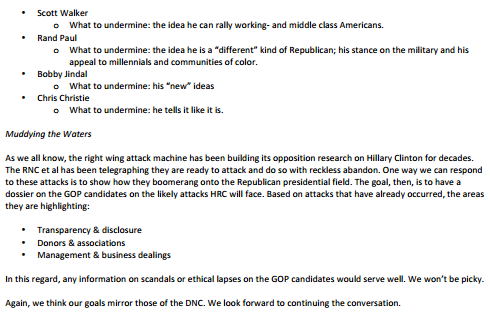 The goal was to elevate Trump, Cruz and Ben Carson. Of the three Cruz turned out to have significantly more substance, and ultimately it was Trump who captured well more than $2 billion in earned media from television and cable news networks, largely to the exclusion of the other GOP candidates.

All the while there were bombshells stored away, waiting to go off on Trump before the election.

Meanwhile, Trump loyalists like Jim Hoft at Gateway Pundit are screaming about the purported role of Paul Ryan and Dan Senor – otherwise known as the “GOP establishment” – in releasing the damaging video. We’re to believe it was the Republican establishment, which did nothing to stop Trump from getting the nomination when it was possible to do so at the convention, which intervened to trash its own candidate, and not the Democrat establishment which has a hand-in-glove relationship with NBC, by releasing it to the DNC-friendly Washington Post.

The same people who knew that without a ruptured duck of a GOP nominee there would be no chance for Hillary Clinton to win election, that’s who. Those people were plotting the course of this election cycle 18 months ago and events have played out precisely as they expected.

Cruz’ future electoral prospects have no doubt been damaged by events. He was pushed into an endorsement of Trump largely as the price for his attempts to keep the internet from slipping away from American control, and barely more than two weeks after he offered that endorsement this video was released, which damages his own credibility for having made it. This, despite it being painfully obvious that the last thing Cruz wanted to do was to endorse Trump. He’s now tainted by the endorsement, as well as hated by Trump’s supporters for resisting it as long as he did.

This likely damages, perhaps fatally, Cruz’ ability to emerge as a future GOP nominee. He still has the ability to emerge as the leader of the conservative movement – such as it is able to survive this election cycle – but that would make him more of a kingmaker than a king going forward.

Which is perhaps best, as while the GOP has a number of potential winning future candidates what it badly needs are kingmakers who adhere to the party’s own principles. It certainly looks like the current kingmakers in the party reside on the opposite side of the aisle.