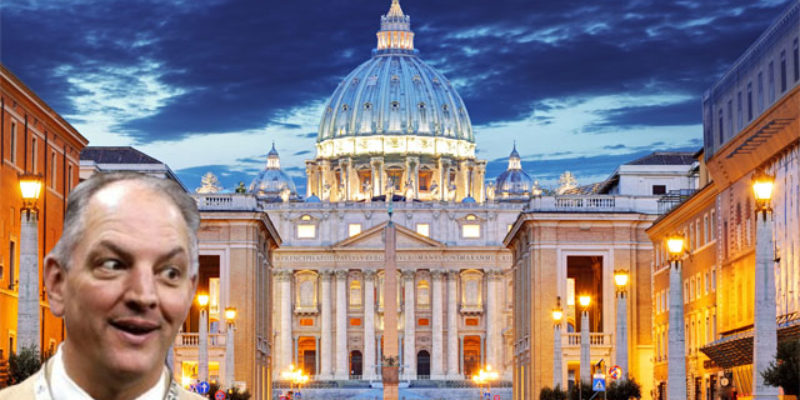 UPDATED: Ahhh, says the governor’s office, but he’s paying for himself.

Except that WBRZ says “not so much.”

The governor said it was his intention to personally fund his trip and not have taxpayers foot the bill.  He said at a news conference on another issue he was going to pay for the trip.  A spokesperson said Friday morning, there was confusion with how the trip appeared in the schedule as to how it was being funded but the governor had always planned to pay for the trip himself.

Specific information on if the state was financing the trip for the other officials attending were not addressed but a spokesperson said there will be a full accounting of the trip when they return. The governor’s office also added, the group is staying at a Roman Catholic educational institution and not a hotel.

While the Edwards family is financing their trip, the state will have to provide security for Gov. Edwards.  Louisiana State Police troopers are legally required to protect the governor.  Information about the cost of the security detail traveling to Italy were not available Thursday or Friday morning.  In WBRZ Investigative reports on former Governor Bobby Jindal’s extensive travel in his last years in office, sources said security details averaged the state about $13,000 a day.

It seems there is little chance the taxpayers won’t be out a good 100 grand because of this excursion, regardless of whether Edwards is picking up the tab for his own flight.

ORIGINAL: We never heard the end of complaints about Bobby Jindal’s globetrotting during his second term and how Louisiana’s taxpayers were essentially subsidizing his travel to places like Dubuque, Spartanburg and Manchester.

Well, with the current governor it looks like not a lot has changed. Except instead of a second term you’re paying for travel in his first term. Amid a budget deficit so big that the governor is about to demand another special session to raise your taxes to pay for it. And instead of Iowa and South Carolina you’re coughing up for Havana and Rome.

Gov. John Bel Edwards will meet with Pope Frances in Italy in the coming week as part of a trip there to promote anti-human trafficking efforts.

Edwards, First Lady Donna Edwards, State Police Superintendent Col. Mike Edmonson and others, including some state lawmakers, are leaving Friday for Rome and will return the following Friday, according to the Governor’s Office. The trip’s goal is to recognize and encourage cooperation among churches and states to fight human trafficking, the Governor’s Office said.

“One of the greatest honors of a Catholic and Christian is to meet the Holy Father,” Edwards said in a statement. “I am humbled by this opportunity, and I am looking forward to discussing the very real threat that human trafficking imposes on Louisiana.”

Edwards spokesman Richard Carbo said the trip’s agenda is still being finalized. He said Edwards is taking no staff from the governor’s office and will be staying at a seminary.

Others on the trip include State Senate President John Alario, R-Westwego, and Sen. Ronnie Johns, a Lake Charles Republican who has sponsored several pieces of anti-trafficking legislation.

If you couldn’t see Alario’s name coming with respect to this junket, go get your eyes checked. And Ronnie Johns merits inclusion with Edwards and his pilgrimage because Johns was the author of the idiotic “stripper bill” in last year’s legislative session which brilliantly illuminated the institutional stupidity of the Louisiana legislature. It passed unanimously in both houses even though the majority of the legislators knew it was patently unconstitutional and wouldn’t do a damn thing to solve the problem at which it was aimed.

It’s not that fighting human trafficking isn’t a big deal; it is a big deal. And it’s a particularly big deal in Louisiana, because New Orleans is a major port city and people brought into the country through the Texas border with Mexico are brought through Louisiana on I-10 in frightening volumes. As a state we’re on the front lines in the war to stop it.

On your dime, of course.

Maybe Edwards can bring us all back some tiramasu, or some nice cannolis. In the meantime, he doesn’t have to go to Italy to get something done on human trafficking; as one smartass on the TigerDroppings Political board noted this morning…