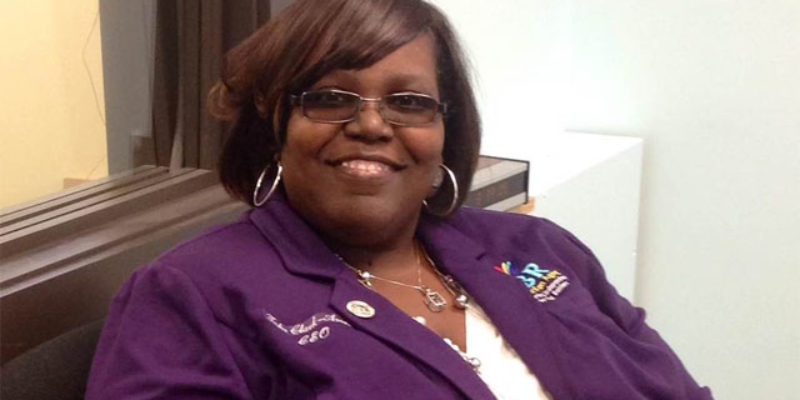 Earlier today, we showed you Denise Marcelle’s dog-and-pony show in support of the Baton Rouge Council on Aging’s embattled (and crooked) director Tasha Clark Amar, and how the family of a 95-year old woman Amar allegedly took advantage of disrupted that press conference to tell their own story.

Dan Freeman, the grandson of Helen Plummer, showed up and read aloud a fairly damning indictment of Amar in what looked a lot like an example of speaking truth to power – considering that not only was Marcelle hosting the press conference but in attendance was most of North Baton Rouge’s legislative delegation – Sen. Regina Barrow, Reps. Pat Smith and Ted James – plus Metro Councilman LaMont Cole, among other luminaries.

Later, after Marcelle’s event the Plummers hosted their own press conference at the family home. It was eye-opening.

According to the Plummer family, finding an attorney to represent them given the well-connected nature of the plaintiff in the case – let’s remember that Tasha Clark Amar is the one suing the Plummers, not the other way around, because when they found out she had written herself into Helen Plummer’s will to the tune of $126,000 over the next 21 years they emptied the bank accounts to keep Amar from getting any money – has been a challenge. It appears most of the lawyers they wanted to hire were scared off not only by the fact Dorothy Jackson, the attorney and Council on Aging board member who drafted the will Amar benefited from, is plugged in to the Baton Rouge legal community but that Amar’s mother Janice Clark is a judge at the 19th Judicial District Court. The Plummers ultimately did find an attorney to defend them.

Again, these are the defendants in the lawsuit. By all rights they ought to be the plaintiffs.

The Plummers also noted the concerns everybody ought to have about the North Baton Rouge political elite immediately jumping on Amar’s bandwagon before a lot of vetting of the facts was done. They should, obviously, because there’s a reason why this allegiance came in such a push-button fashion – the Council on Aging is operating a political machine at taxpayer expense, and the politicians involved all benefit from it.

The Legislative Auditor is investigating the use of Council On Aging funds to pay for political mailers sent out by the Council On Aging PAC in order to profess “endorsements” for a whole host of black and Democrat candidates for office in last fall’s elections. It’s illegal for a quasi-public organization taking taxpayer funds to engage in electoral politics. But what the North Baton Rouge political elite cares about is that machine churning out an army of reliable votes the Council On Aging can mobilize in election season, using taxpayer dollars to fuel a get-out-the-vote drive. And if people like the Plummers get hurt by Tasha Clark Amar’s side activities, they’re simply eggs broken to make the omelet.

They seem to understand that, and are saddened by it – and they also notice the only political support they’re getting comes from white politicians, and while they’re grateful for it they’re also horrified that nobody among the black political class is with them. They’re essentially honorary white people now, thanks to the cries of “Racism!” by usual suspects like Marcelle and Gary Chambers.

It isn’t just the Plummers being victimized here. The Baton Rouge Business Report did an article back in January about the Council on Aging, and found out that Amar’s salary is a whopping $104,000 per year – a princely amount, but just a little piece of the $1.8 million in salaries the COA was doling out. That number is more than the vast majority of Councils on Aging even take in from the taxpayers, and it represents a level of overhead which is more or less criminal in comparison to the standard for charitable organizations.

Amar blasted out her side of the story in an excruciatingly long-winded and mostly unresponsive post at The Rouge Collection, the website belonging to rotund race-hustler Gary Chambers who was one of the reflexive defenders of the COA director. We’ll save you the time and trouble of reading it by passing along two observations: first, outside of making vague and unsupported accusations that Helen Plummer had been “neglected” by her family, which the family hotly disputes, Amar had nothing much to say about the controversy at all, and second, among the items included in her long exculpation was a reference to paying COA’s payroll out of her own personal funds. That isn’t so much a red flag as a May Day parade full of them, and it suggests the possibility of commingling of funds that would make the idea of dumping property tax dollars into this organization without an oppressive level of oversight a prospect completely out of the question for responsible adults.

Meanwhile, one of the Metro Council members who has called for Amar’s ouster at the Council on Aging, Buddy Amoroso, has been doing some digging as to what the options are for dealing with Amar. Amoroso passed this along from a source at the state legislature who looked into the Council On Aging issue, and we found it interesting…

Councils on Aging operate by virtue of a Charter granted by the Louisiana Legislature and subsequent revised statutes.

If a Council on Aging misuses funds or violate the ethics laws of Louisiana, there are procedures to address the violations.

The Governor or Chairman of the Louisiana Executive Board on Aging (LEBA) can direct the Office of Elderly Affairs to conduct an investigation.

If the findings are egregious enough, the LEBA board can recommend to the Governor the following course of action:

The Governor’s Office of Elderly Affairs would temporarily designate another Council on Aging to provide the services to the clients in the parish where the Charter was pulled; thus, there would be no interruption in services.

The Governor’s Office of Elderly Affairs would advertise in the parish for a group, perhaps the Parish Council, to submit a bid to assume the responsibility of the Council on Aging. A new Board would be seated and they would hire new staff members and resume servicing the residents of their parish, and the Charter would be granted to the winning bid.

There is precedent for this course of action. Both Madison and Vermillion Parish have gone through this process of having their Charter pulled and the Council on Aging reconstructed.

Naturally, there is absolutely zero chance Gov. John Bel Edwards will pull the EBRCOA’s charter. Why? Because Edwards benefits from the machine Amar is building just like all the rest of the Democrats on the East Baton Rouge ballot do. One surmises a different governor would have a different opinion on that question, so there is one more reason to lament recent elections in Louisiana – we’ve got the wrong governor, the wrong mayor-president (Sharon Weston Broome is, by the way, an alumnus of the Baton Rouge Council on Aging’s board) and the wrong result on an $8 million tax measure to supply Amar with cash.

Interested in more news from Louisiana? We've got you covered! See More Louisiana News
Previous Article UH OH: The FBI Is Investigating JBE’s Brother Over The Bail Bond Scam In Tangipahoa Parish
Next Article Can Anybody Explain Why JBE Had The Feds Hold Back The First Tranche Of Flood Relief?