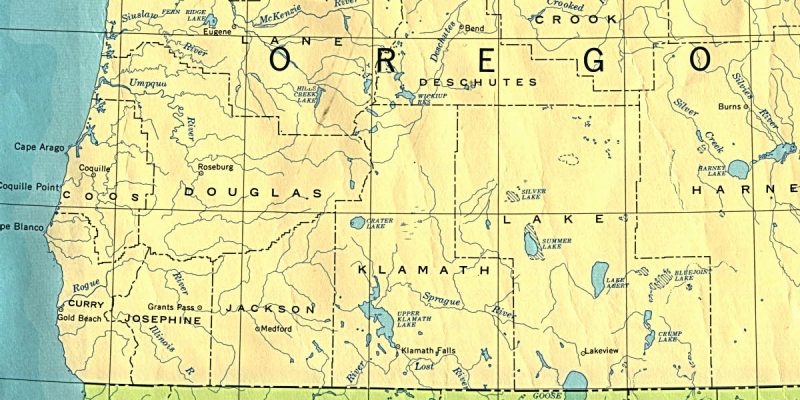 Over the weekend at the New York Times there appeared a piece by Kirk Johnson entitled “Where Anti-Tax Fervor Means ‘All Services Will Cease’,” and it’s worth reading for the comedic value if nothing else.

The premise is that the stupid white rednecks of Curry, Douglas and Josephine Counties in southwestern Oregon, who unlike their betters in leftist Portland have rejected the obvious truth of high taxes creating municipal and therefore cultural prosperity, are reaping a whirlwind in the diminution of government services.

Inside the big wood-paneled downtown library here, a sign spells out the future in four words. Come June 1, “All services will cease.”

For generations in America, small cities like this declared their optimism and civic purpose with grand libraries that rose above the clutter of daily life and commerce. But last fall, Douglas County residents voted down a ballot measure that would have added about $6 a month to the tax bill on a median-priced home and saved the libraries from a funding crisis. So this spring, it has been lights out, one by one, for the system’s 11 branches. The Roseburg central library here is the last to go.

“We pay enough taxes,” said Zach Holly, an auto repair worker in a shop a few blocks from the library who said his vote against the tax was not about libraries at all, but government waste. “I vote against taxes, across the board,” he said.

Douglas County has 107,000 people, which isn’t a whole lot of folks to support 11 different library branches. Rather than shutter all the libraries it’s worth asking whether this isn’t a bit of the old Washington Monument Strategy at work; namely, if you don’t give the bureaucrats their funding increases they’ll inflict a maximum of pain on you rather than seek the best use of resources they have. Obviously that strategy doesn’t work on the people in Douglas County anymore.

Not to mention that for not a whole lot more than $6 a month ($10.99 per month) you can get an Amazon Prime subscription which affords you a lot more benefits than the public library – including more than a million books available in the Kindle Lending Library, from which you can download a book for an entire month. No late fees! The dirty little secret about public libraries is that, with respect to their traditional functions, they’re largely obsolete. When you can download a book on a Kindle (or use the Kindle app on your computer or phone to do it) in 30 seconds, it’s really unnecessary to have a large building full of dead trees to hold the knowledge in those books. And in Douglas County, Oregon, the voters have gotten smart to the idea that if the local public libraries are no longer indispensable in providing an important service, they don’t need ever-increasing funding increases.

“The trust is gone from people who are paying the bills,” said Court Boice, a commissioner in Curry County, which borders Douglas. At least four property tax proposals aimed at keeping county services afloat, like the library rescue plan in Douglas, have failed in Curry County over the last decade.

If a crime is reported after midnight there, best not hold your breath for a response, since cuts to the sheriff’s budget have meant the end of round-the-clock staffing. Even conducting an election this fall could be beyond reach, said Reneé Kolen, the Curry County clerk, who has one full-time staff member left in her elections division, and is facing another possible 30 percent cut in funding this year in her budget.

Curry County has all of 22,000 people in it. Without delving too deeply into the public fisc over there, we can say with a decent degree of confidence that four different tax hike proposals in the past decade are what produced the distrust Commissioner Boice laments. When the people tell you no, you have to accept it and find another solution – not go back to them two years later with the same thing they already said no to.

And another supposed anti-tax horror story…

Just east of Curry in Josephine County, the jail has been defunded after nine consecutive defeats of public safety tax levies — there will be another try next week in a special election — leading to a policy of catch-and-release for nonviolent criminals.

Isn’t that the policy people on the Left and the Right are combining to push for anyway? It sure is in Louisiana, and lots of other states are talking about sentencing reform that would take nonviolent criminals out of the jails and look for other means of dealing with their offenses. And if voters in Josephine County (pop. 82,000) aren’t willing to pay taxes to jail nonviolent criminals, then something tells us they don’t see nonviolent crime as all that big a problem.

What drives this “severe” governmental austerity is that Curry, Josephine and Douglas Counties is a decline in timber revenues. Logging was a major industry in southwestern Oregon but there is much less of it now, for several reasons – a major one of them being that the federal government is a lot less generous with logging permits on land it owns, which is the majority of the land area in those three counties. Between the Forest Service and the Bureau of Land Management, Curry, Douglas and Josephine are at the mercy of decisions made in Washington – not the state next door, but the city across the country.

So the feds, who depress the property tax base by hoarding land that could be owned by local taxpayers, make decisions which dry up the private economy in these three counties, and it’s expected the taxpayers whose incomes have suffered as a result of stupid and/or evil governmental decisions will just come across for more money to keep the local public sector in the gravy boat it’s used to. In Curry, Douglas and Josephine Counties, those taxpayers have opted for a little different position – namely, that if they’re going to suffer economically and have to tighten their belts, well, so will the government folks. Call that anti-tax if you want; we call it perfectly rational. If you’re not offering the taxpayers better services for more money, don’t be surprised if they’re not buying.

And just like the private sector figures out ways to innovate and generate better results for the resources it has, there are some green shoots of innovation going on in these cash-strapped local governments. Like in the story Johnson dug up in Curry County where necessity became the mother of invention…

But there are surprises on this new road, too. When the Curry County parks department and juvenile department were merged a few years ago, for example, it did not seem like a natural fit, said Jonathan J. Trost, who runs both agencies. But then, for budgetary reasons, he started deploying teenage offenders to clean the parks as part of their community service. Recidivism rates went down, and Curry now has one of the state’s lowest percentages of juveniles committing a second offense. It probably wouldn’t have happened, Mr. Trost said, without forced improvisation.

Mr. Leif said a rethinking of what libraries do and how to fund them could also eventually bring back the library system here in a new and creative way, perhaps through some combination of volunteers and privatization. He said the real crisis for the county would not hit for a year or two, when the last of the savings built up during the fat years of logging taxes ran out. And he said he was already preparing the argument to make to voters: that they will finally have to pay, if only for public safety.

Exactly. Dissatisfied taxpayers are forcing a rethinking of local government in southwestern Oregon, and the guess is before long they’ll be the beneficiaries of best practices you’ll see taking hold all over the country. Something different should be done with public libraries, which are wasteful and obsolete, and with parks departments and with the criminal justice system, and with lots of local agencies carrying huge payrolls and massive pensions. But those changes will only start when anti-tax voters begin firmly and repetitively saying “No.”

Interested in more national news? We've got you covered! See More National News
Previous Article We Should Talk About This Crazy Jim Beam Column Bashing LABI And AFP…
Next Article Louisiana Now Denies The Right To An Attorney For Poor Defendants And The Bar Association Doesn’t Care