In case there are any illusions about whether John Alario, the mouth-breathing RINO lackey of John Bel Edwards, is killing HB 71, the current historical preservation bill in the precise way he’s killed its predecessors, let’s dispel those right now.

Senate and Governmental Affairs, as we have warned over and over again, is Karen Carter Peterson’s committee. Karen Carter Peterson, who is the chair of the Louisiana Democrat Party – which is a profound conflict of interest in itself and an indictment of Alario as the rancidly corrupt old-school scumbag epigone of Louisiana politics this state cannot be rid of fast enough for giving her the chair of that committee given that she is both a party chair and chair of a legislative committee which regulates the activities of political parties – is a social justice warrior so unhinged when it comes to issues of identity politics that she threw a tantrum and destroyed a birthday cake of a colleague in the legislature over a politically correct message in its icing last year. She’s had historical preservation bills before in the past year, and made sure to kill them.

Peterson’s committee has nine members. Here they are. 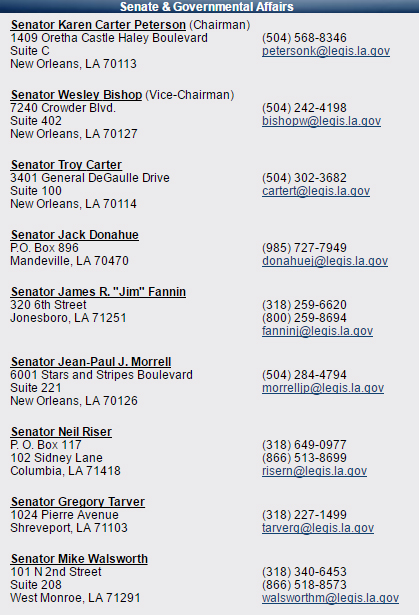 Peterson, Bishop, Carter, Morrell and Tarver will insure HB 71 dies in that committee, just like three other similar bills have died there in the past year.

The bill is now all but dead, as is historical preservation. As we have said.

John Alario is the reason why, because as we’ve noted, Senate rules indicate such bills should be heard in the Senate Education Committee, which is specifically charged with hearing historical preservation bills. But Alario does not care, because John Alario’s raison d’etre in the Louisiana Legislature is to amass power by serving as the lickspittle to the governor – whether that governor is Edwin Edwards, Kathleen Blanco, Bobby Jindal or John Bel Edwards – and wetting his beak while serving as the governor’s minion.

And the current governor does not want to have to make a choice between the two-thirds of the population who have consistently told pollsters they object to the removal of historical monuments, and the Hard Left social-justice crowd who forms the base of the Louisiana Democrat Party.

Edwards said while Louisiana’s Confederate past is “certainly part of our history, can we say it’s the best part?”

The governor’s comments came hours after members of the Legislative Black Caucus held a news conference to urge the Senate to strike down Carmody’s measure.

The governor said requiring an election before any war monument can be moved isn’t feasible, arguing that many objects might need to be moved for reasons entirely unrelated to the monument’s political significance. He also said the state should not be intervening into these local issues.

In other words, he wants to do everything he can to signal to the Black Caucus that he’s willing to pander to them without making the 65-70 percent of Louisianans who want to preserve the state’s cultural patrimony aware that he is in opposition to doing that. These aims cannot simultaneously be fulfilled when a bill is presented to his desk.

So it falls to Alario to kill the bill and protect Edwards from making an adult decision. Which Alario is happy to do, rules be damned.

And therefore, nothing will stop Robert E. Lee from being the next statue to fall in the campaign of bowdlerization afoot in New Orleans.