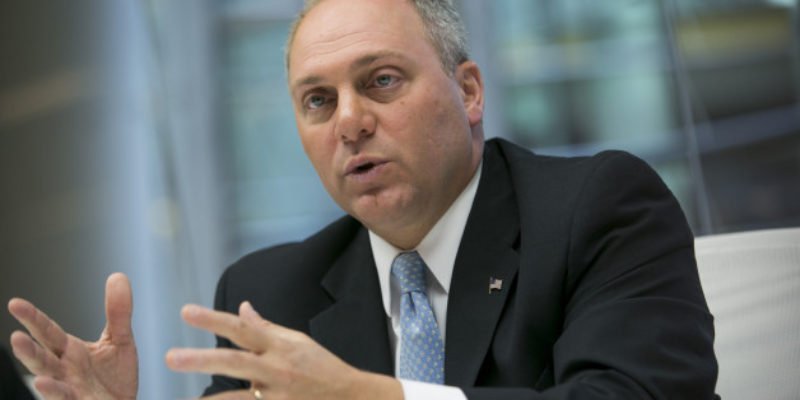 It’s good to know that the media in Louisiana can be about as tone deaf as the national media. With Congressman Steve Scalise well on his way to recovery (the hospital he is in has upgraded his condition to “fair”), WWL Radio, or at least its Facebook page, has decided that now we can talk about the dangers of extremism. 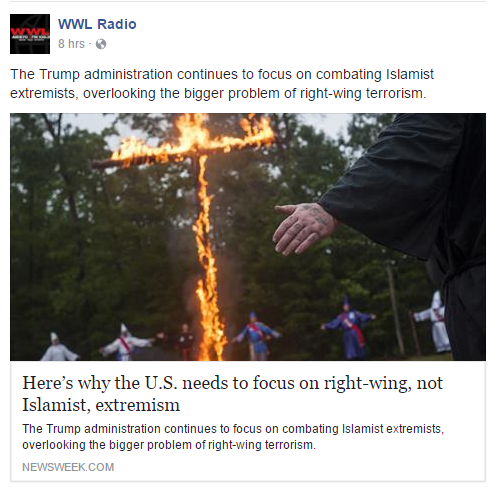 Here’s the Newsweek article WWL is linking to. It’s nonsense, written by Mirren Gidda – a London-based reporter of Middle Eastern descent who may or may not be Muslim.

A joint project by the Investigative Fund at the Nation Institute, a nonprofit media center, and Reveal from the Center for Investigative Reporting has found that within the past nine years, right-wing extremists plotted or carried out nearly twice as many terrorist attacks as Islamist extremists. Of the 115 right-wing incidents, police only foiled 35 percent. Compare this to the 63 Islamist terrorism cases, where police foiled 76 percent of the planned attacks.

Right-wing extremists were not only more successful, they were often more deadly, too. From 2008 to 2016, a third of right-wing attacks involved fatalities, compared to 13 percent of Islamist attacks. It should be noted, however, that Islamist extremists killed more people overall, with a death toll of 90 people compared to 79.

In a statement pointing out the higher rate of successful, right-wing terrorist attacks, the Investigative Fund said: “This project quantifies just how irrational Trump and the GOP’s fixation on ‘radical Islamic terrorism’ as the greatest security threat is.”

“Fixation” might be the right word. The president has yet to acknowledge the problem of right-wing violence, remaining uncharacteristically silent after an Islamophobic attack on a mosque in London that left one man dead. (Trump tweeted about the three incidents of Islamist terrorism that have hit the U.K. capital in recent months.)

Couple of things here: First, there hasn’t been a noteworthy attack from a right-wing extremist since… I dunno, 2009? That guy who killed the abortion doctor, I think. Anyway, that’s the only high-profile case of “right-wing extremism I’ve been able to find from the last decade or so.

Islamic extremism? Those are a dime a dozen.

Secondly, WWL’s coverage area includes Scalise’s district, and Scalise was a victim of a left-wing extremist who had been seemingly corrupted by angry liberal rhetoric. It would seem that, at the very least, WWL might want to take on extremism as a topic of discussion by focusing on extreme rhetoric that leads to situations like Scalise’s.

It is incredibly dumbfounding to visit WWL’s page and see this post, because it is so incredibly tone-deaf for the type of political environment we currently live in.