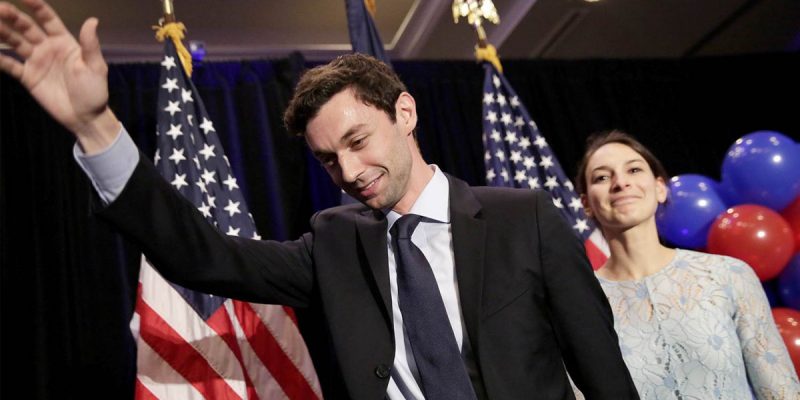 This might be the most hilarious thing we’ve seen all week. Keenan Pontoni, a 30-year old millennial political consultant who managed to ride a $23 million campaign war chest (his opponent had $4 million) into a 52-48 loss for his client Jon Ossoff Tuesday night, is getting a top-of-page feature story in Roll Call.

And it’s a favorable piece. For the consultant who blew a lopsided cash advantage in the most expensive Congressional race of all time.

But despite back-to-back losses, Pontoni’s now a man in high demand, with a bright future in a party that desperately needs fresh perspectives.

And here’s a money quote which needs special notice…

“Maybe he should go from this to running a presidential campaign,” said Democratic pollster John Anzalone, who worked on the Ossoff campaign. “He has the mettle to really do any type of race.”

Anzalone is known for push-polling hopeless races for Democrat candidates and delivering poll results those candidates can use for fundraising along the lines of “See? We can win – all we need is your money.” That was the sole discernible campaign strategy – outside of screaming “Hookers!” for 10 months solid – of the Charlie Melancon Senate campaign in 2010 that Anzalone was the pollster for.

Understand, that’s not a tactic which has any use in winning elections. It’s a tactic for fleecing donors and getting consultants paid. Anzalone is touting Pontoni for one reason – Pontoni will hire Anzalone to do polling for his next candidate.

Pontoni has had little to do with the media spotlight and wants to keep it that way. But the Dexter, Michigan, native has ideas about how his party should be reaching out to voters, especially new voters — even if it didn’t result in a win this year.

He started out as a numbers guy. “When I was younger, I really loved the idea of trying to quantify social outcomes,” he said in an interview the Sunday before the election.

But over time, Pontoni, an economics major, has lost his devotion to data. As a math teacher in the Bronx with Teach for America, he didn’t like the way test scores dictated education policy. In the campaign world, he’s troubled by the prioritization of certain metrics.

“Most Democratic campaigns have got to a space where their reliance on efficiency and measurable voter contact strategies comes at the cost of many other unmeasurable effects,” he said.

The Ossoff campaign, Pontoni said, was different. It organized three or four house parties a day and targeted a large universe of potential supporters. Ossoff was at countless local gatherings and usually available to press afterwards. He took voters’ questions at tele-town halls.

“The organizing principle Keenan has been operating on is that if you scale up a campaign, it’s not just about money; it is about scaling up the face-to-face contact between the Ossoff volunteer and his or her neighbors,” said Michigan Rep. Dan Kildee, a member of the Democratic Congressional Campaign Committee leadership, who went to Georgia to campaign with Ossoff.

Y’know, that’s something sort of sellable when you win. When you parlay a $23 million-to-$4 million money advantage into a loss which sets the Democrat Party into internecine warfare and triggers calls for Nancy Pelosi’s resignation, it’s a little less attractive.

First, the modern Democrat party is made up by and for people incapable of doing a proper job. So naturally they’ll take the position that a consultant who sets $23 million on fire in losing a race the party had convinced itself it was going to win is a “rising star.”

And second, there is no greater vehicle for the destruction of wealth than the modern Democrat party. The big-city political machines they’ve created have proven that beyond a doubt, but what’s great about the Ossoff campaign is the effects of its wealth destruction were restricted to gullible Democrat donors who volunteered their dollars for the bonfire.

Don’t get us wrong; we love that these people think Pontoni is a rising star. And we’re more than happy to see him catch a presidential candidate in 2020. Heck, give him their nominee; surely he’ll do fine.

Jon Ossoff actually ran this. How is it not satire? pic.twitter.com/v3aJyAabwV

Interested in more national news? We've got you covered! See More National News
Previous Article McCollister To Broome: Do You Want St. George? Because This Is How You Get St. George
Next Article BATISTE: The Times-Picayune Is Protecting Its Heroic Mayor From Mean Rumors