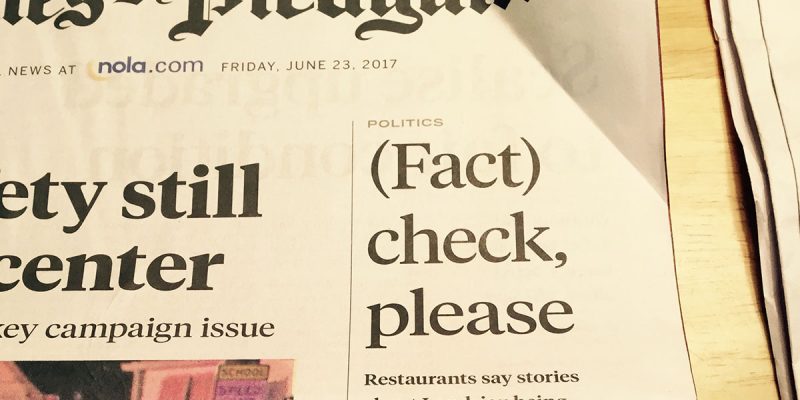 The Times-Picayune yesterday rushed to defend Mitch Landrieu from a story making the rounds. Several weeks back a story popped up on the internet that said Mitch was booed out of Mandina’s restaurant in Mid City shortly after the removal of Robert E. Lee from Lee Circle.

The removal of the four historic monuments has been a tremendously unpopular initiative from the term-limited Mayor who ignored the public and refused to budge from his own bullheaded crusade.

The Mandina’s story resurfaced again recently about the Mayor being heckled and booed out and then a similar story went viral about a not-so-gracious reception at Clancy’s restaurant Uptown.

The occasionally-delivered-paper showed its insignificance by reporting on an internet story. And the story, which made the front page during a big news cycle, also demonstrates the unquestioned bias and blind allegiance the Times-Picayune grants the abusive Mayor.  They had a food critic, Brett Anderson, dive in to politics.

With the Picayune’s front page defense of Landrieu’s reputation, The Hayride is continuing its push for reader videos of people booing Mitch Landrieu. Submitters receive a T-shirt and will be in the running for a $500 cash prize. Basically, if you see Mitch and video on your phone as you heckle and boo the Mayor, you could have $500. The Times Picayune will have a very difficult time knighting for the Mayor when there’s video.

The pro-monument group Save Our Circle announced a boycott of the Times-Picayune last month.  The Hayride examined the heavily-skewed, anti-monument opinion pieces the one-time great newspaper has posted. Its editorial leadership is out of state and its ownership is in the north.  The Times Picayune does not accurately depict New Orleans, nor does it accurately represent New Orleanians, which fits right in line with Mitch Landrieu.