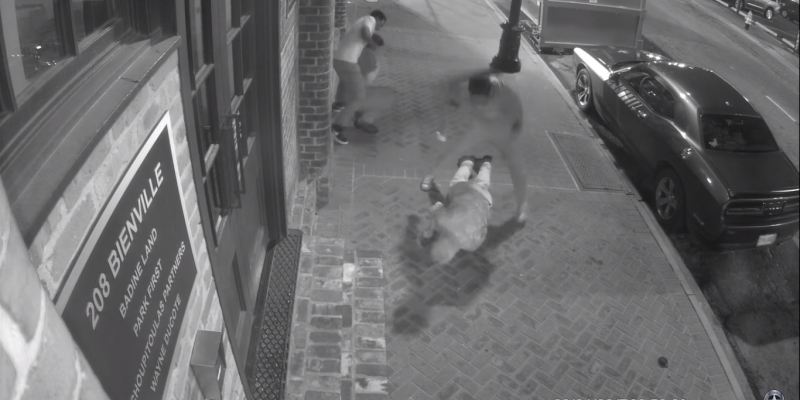 New Orleans’s crime problem has spilled out of the city’s poor neighborhoods and has now hit the tourist areas, again. This weekend, two tourists from Boston were beaten and robbed in the French Quarter.

Detectives have released surveillance video of an attack Saturday evening in the French Quarter that left two tourists injured.

New Orleans police said the attack was reported before 9 p.m. in the 200 block of Bienville Street, as the two men were walking back to their hotel.

Four men walked up behind the two men and attacked them, police said. Investigators said the victims were knocked down to the ground and robbed of their belongings.

New Orleans police have released a surveillance video of the attack.

Now that crime is affecting tourist areas again, we can expect Mitch Landrieu to pay attention to the issue. As long as crime confines itself to the black and poor areas of New Orleans, Mitch isn’t really all that concerned. After all, he would rather exploit them for their votes instead of actually delivering policy that could improve their lives.

Mitch has had nearly 8 years to attack the problem of crime in New Orleans. However, he has failed to do so. Instead, his policies have contributed the current explosion of crime. When Landrieu first took office, he gutted the New Orleans Police Department by instituting a hiring freeze. Part of the reason why New Orleans cannot retain good police officers is that those cops know that Mitch Landrieu does not have their back. Instead, Mitch has entered into a consent decree that allows the Federal government to essentially control policing in New Orleans.

Mitch doesn’t take the problem of crime seriously even now. This weekend, it was reported that he pressured Attorney General Jeff Landry into shutting down his own anti-crime task force.

Yet another example of how crime in New Orleans is out of control.