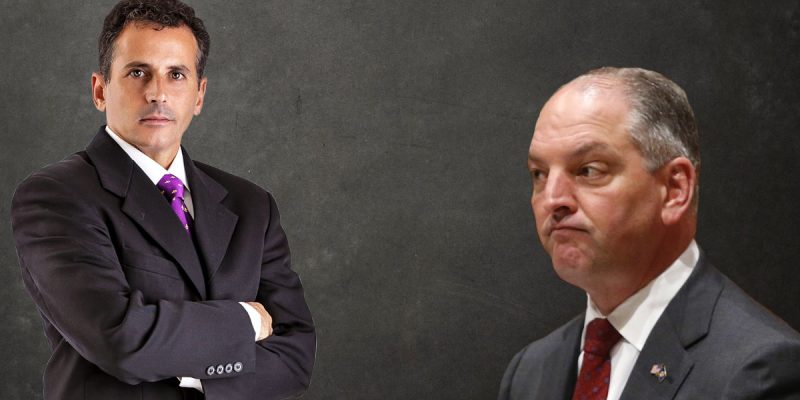 We didn’t get around to this last week amid all the other things that were going on, but the Public Service Commission race in the South Central Louisiana district which includes most of Baton Rouge, Houma-Thibodaux and Lafayette is the source of a rapidly-brewing, and quite amusing, political circus between Gov. John Bel Edwards and former state representative Damon Baldone, whom Edwards appointed to the seat this spring when Scott Angelle took a job in the Trump Administration.

When Edwards appointed Baldone to the PSC, it was with, everyone thought, the understanding that the appointment was made on an interim basis only. Baldone wasn’t to run for the seat this fall. From the press release Edwards put out on June 1…

Today, Gov. John Bel Edwards announced that he has appointed Damon J. Baldone to the Louisiana Public Service Commission where he will serve in the place of Commissioner Scott Angelle who recently resigned his position. Baldone will serve until a special election is held.

“I am excited to announce Damon’s appointment to the Louisiana Public Service commission because Louisiana consumers will benefit greatly from his years of experience in both the public and private sectors,” said Gov. Edwards. “I appreciate his willingness to continue to serve the great people of our state and know that their best interest will be at the center of every decision he makes in his capacity as a commissioner.”

We’re speculating here, but at the time there was a lot of buzz surrounding the idea that Edwards and the Louisiana Democrat Party were going to recruit someone with a “D” next to his name to run in that seat. Let’s not mince words here – Baldone is without question a Democrat; he served three terms in the legislature as a Democrat and he’s an ambulance-chasing trial lawyer. He’s calling himself a Republican now, but that’s an attempted scam on his part. Here’s a quote explaining how vigorously he’s attempting to weasel his way out of the “D” label he carried all his life…

“I’m affiliated with both parties,” Baldone said. “I have ideals and philosophies from both parties.”

Our joke about Baldone is that he’s a political hermaphrodite. That’s a label he richly deserves; after all, he went to court in 2015 attempting to list himself as both a Republican and a Democrat in preparation to run for…something.

What you could say about Baldone is that, like Norby Chabert, John Alario and others, he was one of the people who crashed the Louisiana Democrat Party into the iceberg and then fled the sinking ship. Now he’s a Republican and he’ll surely trash the GOP brand if the party is stupid enough to let him.

Given all of that, Edwards and his political handlers were, we’re told, looking for an actual “D” to run for the seat. They expected there would be some well-known and well-heeled Republicans in the race, but you can’t do party-building if your party doesn’t run candidates.

So when a day or two after being appointed to the PSC Baldone started blabbering about running in the fall, the governor had a good bit of egg on his face – not to mention the fact his efforts to run someone with a “D” next to his or her name were now co-opted. And when Baldone qualified for the seat last week, this was how his press conference went…

He’s a little bit reminiscent of your kid getting caught coming home after curfew, no? Lots of mumbling and evasion.

Baldone is busy informing us what a good friend John Bel is, and how he thinks he’s doing a great job as governor. Meanwhile, Edwards has given him the cold shoulder…

At the time, Edwards spokesman Richard Carbo said the governor was seeking a short-term replacement for Angelle with the agreement that the interim commissioner would not seek the office permanently.

But Baldone qualified July 12 for the permanent seat along with former State Rep. Lenar Whitney, R-Houma, and Dr. Craig Greene, R-Baton Rouge, a political newcomer. Baldone qualified as a Republican, although he served as a Democrat during his 12 years in the Louisiana House of Representatives and was appointed by a Democratic governor.

In fact, Baldone said within a week of his appointment that he would seek election in the autumn and suggested then that Edwards had never placed any conditions on him accepting the District 2 interim job, other than to “look out for the people of Louisiana.”

The governor said Monday there was some miscommunication on his part.

Carbo said Monday that Baldone has met with Edwards since the controversy, but he said he did not know what the two discussed. Baldone said in that meeting that Edwards took responsibility for the confusion that arose concerning Baldone’s intention to run in the autumn election. Carbo said the governor would remain neutral in the race, which involves only the Republicans.

Needless to say, the fact Edwards wouldn’t support Baldone this fall for a seat he’d already appointed him to is a comic snafu. It makes the governor look like an absentee landlord at best and powerless at worst, and it reinforces the perception of Baldone as a liar and a flake – two characterizations which are particularly bad news in someone who regulates public utilities.

What you’re going to hear a lot of going forward will make Edwards look even more clueless – namely, that as the Lenar Whitney campaign is busy informing anyone who’ll listen, Craig Greene was one of those Republicans who backed Edwards over David Vitter in the runoff. There’s even a picture… 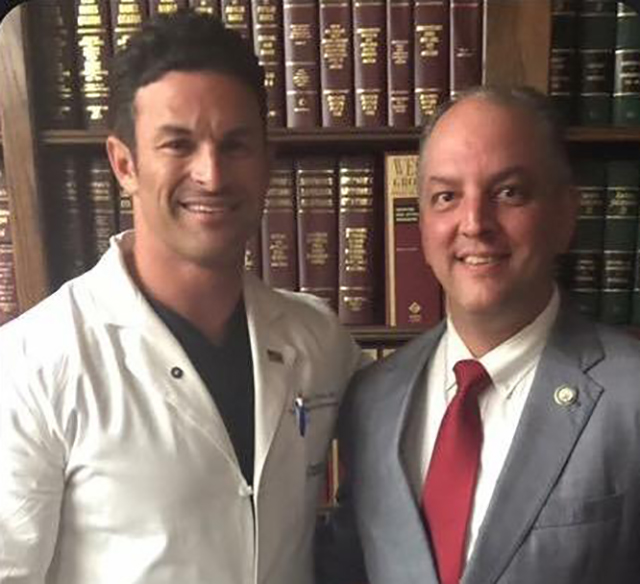 Greene’s camp is going to acknowledge that decision and call it a mistake of some sort, motivated by political inexperience or something, and it wouldn’t be a surprise if he blamed the whole thing on Jay Dardenne – who his father served with in the state Senate and who Greene supported in the primary (Dardenne backed Edwards in the runoff and got a quarter-million-dollar-a-year gig as the Commissioner of Administration out of it; Greene has to be wondering what he got other than that picture). He can point to the rest of his pre-political life and say the decision to back Edwards was an anomaly and he wasn’t alone in making it, and he’s not wrong in those respects.

But Whitney, meanwhile, is calling both her opponents RINO’s, and she has a point. Whether that’s an actual negative in PSC District 2, which voted overwhelmingly for Angelle in 2012, is a question, though; Angelle was, after all, a Democrat as late as 2010.

In the meantime Baldone will run this race touting both his conservative credentials and his fond relationship with Louisiana’s left-wing governor who refused to endorse him. If you find yourself confused by that, be consoled that you’re not half as confused as Baldone is.