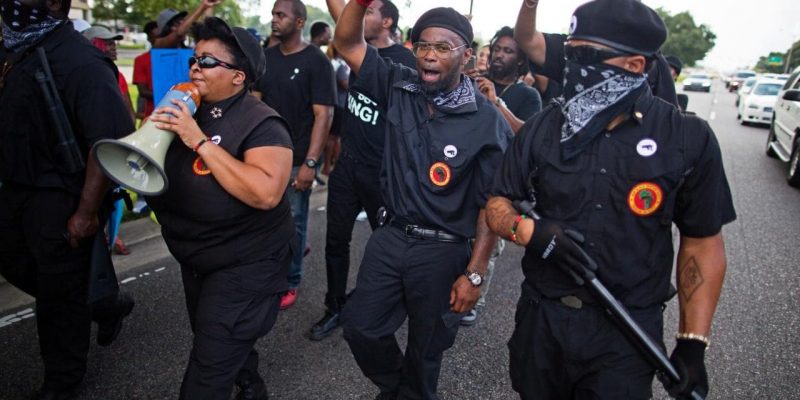 LOUISIANA – CALL TO ARMS – white policemen becoming more and more VIOLENT! STRAP UP! We believe in SELF DEFENSE. So defend your household!

The problem is Mr. Ceasar and his ilk are dangerous because so many follow his empty-headed and insanely misguided inflammatory rhetoric. People who believe they are victims are so easily fooled.

An internal FBI investigation found recently a majority of gunmen targeting cops just because they are cops found revenge, inspired by the Black Lives Matter movement, the media’s assault on police shootings, and criticism from politicians, motivated them. Thank you Mr. Ceasar and those who believe and speak as you do.

“Law enforcement officials believe that defiance and hostility displayed by assailants toward law enforcement appears to be the new norm,” said the internal report stamped “For Official Use Only.”

So dumber than a load of bricks Ron Ceasar and his “white cops are violent therefore you should strap up” message has consequences.

The report studied 50 of 64 killings of police in 2016 and found 14 simply wanted to kill police. When it comes to Baton Rouge, Ceasar leads the charge for encouraging violence against police.

He recently posted on his Facebook page this about a pending Black Panther protest on the one year anniversary of the police shooting of Alton Sterling,

“SHOWDOWN IN BATON ROUGE, LA – THE NEW BLACK PANTHERS FACE-OFF WITH BATON ROUGE POLICE, HIGH NOON, JULY 5, (WEDNESDAY) AT THE POLICE STATION AT 9000 AIRLINE HWY OVER THE NON-INDICTMENT OF WHITE POLICE OFFICER SALMANELLI FOR EXECUTING BROTHER ALTON STERLING. WOW! THE PANTHERS BELIEVE IN STRAPPING UP WITH SHOTGUNS AND RIFLES STAYING PREPARED TO DO BATTLE!!!!WOW!, GONNA BE A SHOWDOWN IN LOUISIANA!!!”

Clearly, the 64-year old Ceasar was excited about the prospect of a violent encounter with police. There was violence but no guns were involved during the protest at Baton Rouge police headquarters.

Ceasar predicted more Black Panthers are coming to Baton Rouge and he says the next time they act it will be unannounced and violent.

“Of course it’s going to be violent. Because the police have shown that violence begets violence. We can’t go over there and demonstrate peacefully.” Ceasar said.

Other than his call for violence against white policemen, Ceasar might make a good state treasurer. He is an accountant by trade. What do you think? Does he have your vote?

Interested in more national news? We've got you covered! See More National News
Previous Article BAYHAM: Her Honor, Torres Out And Out Again, And The “Chalmatian” In The NOLA Mayor’s Race
Next Article The John Bel Edwards-Damon Baldone Public Service Commission Fiasco