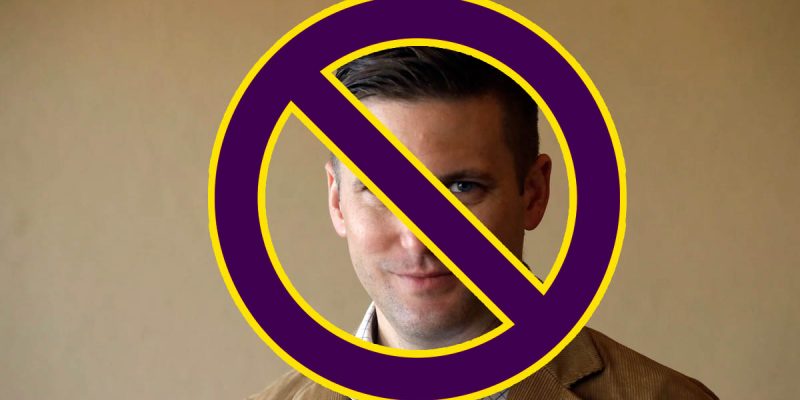 It’s not known what kind of event Spencer, who is a purveyor of white nationalist claptrap and was on hand for the Charlottesville rioting last weekend, was trying to plan at LSU. Whatever it was, it won’t happen – at least not with the university’s sanction.

“We will take the necessary precautions to ensure that our campus is safe from violence, that our students and faculty are safe from people trying to stir up troubles,” LSU President F. King Alexander told The Advocate.

Spencer’s people have been making calls to LSU officials trying to arrange a visit to Baton Rouge, Alexander said.

The rhetoric about keeping the campus “safe” is a bit troublesome, as that’s a buzzword the academic crowd likes to throw around as a cover for efforts to de-platform or otherwise silence people they don’t like, and LSU isn’t totally immune to the campus “safe space” craze. Spencer’s brand of tribal political rhetoric doesn’t particularly cut it as quality fodder for discussion at a flagship university, though, so it’s not objectionable that he’s rejected – particularly after the fiasco in Virginia last weekend. LSU did, after all, host an appearance by Milo Yiannopoulos last year – the university doesn’t have a reputation as an unfriendly place for non-leftist ideas.

Spencer isn’t finding a whole lot of friendly venues elsewhere in the SEC, either. There were plans to hold a white supremacist “White Lives Matter” confab at Texas A&M which were kiboshed by the university, and this week Florida likewise demurred at the opportunity to become the next Charlottesville. Spencer now says he’s going to sue the University of Florida, because his organization had apparently signed an agreement to rent space on campus – a similar lawsuit against Auburn was successful and an event took place there which was embarrassing but didn’t result in violence. On imagines the Florida suit would find less purchase after what happened at the University of Virginia.

Meanwhile, some scrutiny is beginning to fall on the overall organizer of the “Unite The Right” rally in Charlottesville, someone named Jason Kessler – whose background isn’t quite what you’d expect from an ultra-conservative white supremacist leader. It turns out Kessler was an Obama supporter and had flirtations with the Occupy movement – he claims it was because he liked the anti-globalist part of Occupy’s rhetoric and that he quickly clashed with Occupy’s leaders over the rest. Snopes, which is less and less useful as an objective source on information like this, denies Kessler is a left-wing plant, but does confirm he was with Obama but fell out with the president over “identity politics.”

That the organizer of the “Unite The Right” rally who cobbles together skinheads from across the country to pollute a debate over historical preservation – the nexus of the conflict in Charlottesville is an effort by the black racist vice-mayor of that city to take down a statue of Robert E. Lee – is a sketchy individual without legitimate bona fides as a conservative shouldn’t be very surprising. Nor should it be surprising that colleges around the country are declaring they want no part of what happened at the University of Virginia.

And since LSU was previously afflicted with the racist stylings of David Duke when he was a student spewing passages from Mein Kampf at Free Speech Alley, nobody should have a problem with the next generation being declined – we want free speech, but that doesn’t mean we have to invite rioting to the campus in time for football season. But in that vein it’s worth asking that Alexander be just as judicious about keeping other anti-social types, like Black Lives Matter, CAIR, La Raza and Antifa, from having similar confabs. Our guess is Weimar LSU wouldn’t look any better than Weimar Virginia did, whatever might bring it on.