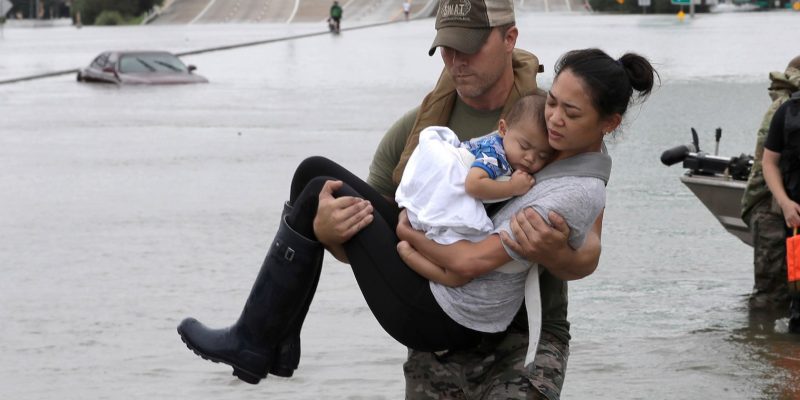 It’s the damnedest thing losing your home in a hurricane. Too many in South Louisiana and Mississippi know intimately that sick feeling in the gut the moment you realize your home is full of water and most of the stuff you spent your life working for is gone. Pictures, old videos, irreplaceable family stuff.

Overwhelming doesn’t begin to describe starting from scratch, especially for the elderly.

The stress Hurricane Katrina caused my elderly father contributed to his death. Like so many, my parents were displaced for months after several feet of water flooded their Metairie home. My father died two years after the storm and my family is convinced his passing was caused in part by the stress Katrina brought into his life. The Katrina death toll is much higher than most realize considering the unrest inflicted on the elderly and the toll it took on their health.

Fortunately Harvey’s reported death toll has not come close to that of Katrina. But then again we will never really know how many lives Harvey shortened as a result of the stress and heartache the storm caused our society’s most vulnerable.

In light of all the suffering Harvey is causing the question many are asking is why. And more specifically if there is a God why would He allow Harvey and Katrina to happen?

I’ve given this question a lot of thought and here’s what I’ve come up with. It seems to me God had to make a decision before creating man. He could make him a puppet controlling him if he got out of line or strayed too far or God could have given man free will. I believe God chose the latter.

The problem with giving man a free will is that he would obviously make bad decisions and that brings harm to others. Hence we have awful things like murder, gossip, stealing, and whistling.

If you ask me I would much rather live in a world where people can hurt each other, both emotionally and physically, than one where I was a robot or puppet. Freedom is a wonderful thing but can be abused.

Some may argue God giving us free will may cause a lot of the pain and suffering in the world but it doesn’t explain natural disasters like Harvey and Katrina nor does it give as an understanding of why people get cancer.

Many Christians believe since man often rejects God’s love it brings sin into the world and that has an adverse impact on the planet translating into natural disasters, sickness, and disease. The idea is the natural law of physics means sin brings not only calamity to man but to the environment and eco system in which he lives. This is all probably little comfort to those spending the night in a hurricane shelter instead of the warm, safe, sanctuary of their home.

I don’t begin to present myself as an expert in any of this but there is something I believe is undeniable about Harvey. The storm has redirected the nation’s focus on the goodness, unselfishness, and kind-heartedness of her people. The Cajun Navy being exhibit one. That goodness has been there all along but mostly ignored by the media.

The media narrative shoved down the throats of the public is we are a country of oppression, division, and bigotry. Harvey reminds us the media has been lying to us. We see people of different races helping each other doing whatever it takes to bring safety, shelter, and comfort to the hurting.

Why do bad things happen to good people? Why is there a hurricane season? We may not fully understand that until we get to the other side. I don’t mind that so much as I see mystery as a big part of life especially when it comes to our faith.

But what is clear thanks to Harvey is we are a nation with a whole lot of caring, compassionate, honorable people. We don’t see color when others are hurting. As Americans we watch out for own. That’s what Harvey and Katrina has taught us.

Interested in more news from Louisiana? We've got you covered! See More Louisiana News
Previous Article Circumstances With Harvey Are Finally About To Change, Per The Latest Forecast
Next Article VIDEO: The Coonass Flex Seal Commercial, Cajun Navy Version