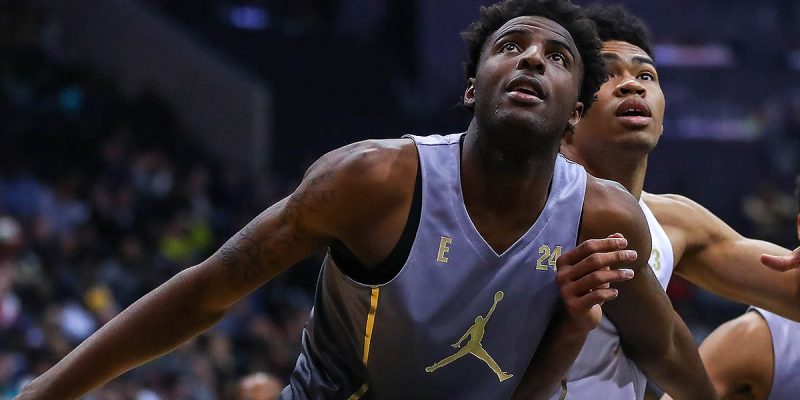 We haven’t done any posting on the saga of seven-foot Chalmette High superstar basketballer Mitchell Robinson and the possibility he might end up playing for LSU and head coach Will Wade, but we heard rumors about the possibility three weeks ago and they’ve never gone away. Now, with the news Tuesday that Robinson has received his release from Western Kentucky, where he signed and enrolled, those appear to be more than rumors.

Robinson’s story is one suitable for a movie to be made one day. A high school phenom and a McDonald’s All-American recruit, he improbably signed with the Hilltoppers of Conference USA back in November of last year, spurning offers from LSU, Texas A&M, Alabama and North Carolina, among others. Robinson did so because Western Kentucky head coach Rick Stansbury, who had been the head coach at Mississippi State for more than a decade before resigning for personal reasons in 2012, hired his godfather, former North Carolina and NBA star and Tulane assistant coach Shammond Williams, as an assistant. Williams brought Robinson with him to Western Kentucky in what appeared to be a shocking development, one which ultimately helped to seal Johnny Jones’ fate as LSU’s head coach.

But there had been a number of rumors that Robinson wasn’t comfortable with his decision to play at a program with a more limited profile than one would expect the nation’s No. 8 national recruit to choose. Basketball recruiting analyst Jerry Palm had floated the idea back in January Stansbury might bring Robinson with him if he were hired to replace Jones, though there was never any serious interest from LSU in Stansbury – whose 2016-17 WKU team stumbled to a 15-16 finish despite being picked second in their conference in the preseason. And in the offseason, Williams resigned, in what looked a bit more like a firing; shortly thereafter whispers that Robinson wouldn’t end up at Western Kentucky began, and shortly after that those whispers turned into rumors that Robinson could well be headed to LSU.

But in July, those rumors were silenced a bit when Robinson, at the urging of his mother, enrolled at WKU. He didn’t stay long, though, and last week cleared out of his dorm room in Paducah and went home – leading Stansbury to publicly announce, in somewhat humorous fashion, that he had suspended Robinson from the team. One could question the disciplinary value of that decision seeing as though his wayward player was already three states away from campus and gone forever by the time he suspended him.

And Tuesday, Western Kentucky issued Robinson a release to find a new team.

“WKU freshman center Mitchell Robinson has been granted his release to transfer from the Hilltopper program. After discussing Mitchell’s future with him Monday evening, we agreed that it would be best for both sides to allow him to move in a different direction. As I’ve said before, Mitchell is a great kid, and we wish him well going forward,” Stansbury said.

“Robinson enrolled at Western Kentucky, received financial aid in the form of an athletic scholarship and participated in team practices that count toward the 2017-18. Therefore, should Robinson transfer to another Division I program, he would have to sit out this season by rule.”

Robinson could apply for an NCAA waiver and, if successful, could be eligible for this coming season. We could speculate on the chances of that happening, but it’s a crapshoot. He could say he was treated unfairly at WKU, he could say he’d like to be close to home for the one year he’s expected to play college ball, or he could use a bit of leverage with the NCAA along the lines of “Look, you can either have a marketable basketball player the viewing audience is interested in following playing ball for one of your teams and generating revenue for you this year, or you can have that player plying his trade in a European or Australian pro league. Up to you.” Whether any of that will work is an open question – one never quite knows how the NCAA will rule.

ESPN’s Jeff Goodman, who has followed the Robinson saga breath by breath over the last few days, said Robinson is fine with the idea of sitting out a year if he has to…

More on Robinson: source told ESPN Robinson doesn't want to play at WKU. Would be OK transferring, sitting this year.

Remember, Robinson is a New Orleans native. Would not be shocked if he lands at LSU. But Stansbury could block him from certain schools.

Western Kentucky didn’t block him from anyone outside of Conference USA. If Goodman’s sources are correct, he’s at least somewhat likely going to come home to Louisiana to play either this year or next year for LSU.

So, let’s just say Wade pulls off a miracle and gets Robinson on campus. What are the possibilities?

The most pleasurable eventuality, and should it happen Wade might be considered a miracle worker, would be for Robinson to get an NCAA waiver and be eligible to play this year. The team Wade will put on the floor in November is a much, much different one than the outfit he inherited from Jones at the end of March; not counting previously-signed recruits Galen Alexander and Brandon Rachal, Wade has already reeled in four players (6-7 North Texas senior transfer forward Jeremy Combs, 5-11 freshman point guard Tremont Waters, 6-4 junior college guard Daryl Edwards and 6-10 freshman center Mayan Kiir) to replace departing members of the 2016-17 team – and he still has two scholarships to give. Robinson isn’t the only potential impact recruit on LSU’s board – Southern Utah guard Randy Onwuasor, a 6-3 scoring machine who averaged 23.6 points per game last year on a 6-27 team, is visiting Gonzaga and South Carolina this week and will be on LSU’s campus for an official visit next Tuesday before deciding between the three. Onwuasor is a senior transfer who would be eligible this year.

And there is also 6-11 Oregon transfer Kavell Bigby-Williams, who had committed to LSU but has not yet been listed on the Tiger roster. Bigby-Williams, a former national junior college Player Of The Year, would have to sit out this season.

But if Wade could reel in Onwuasor, who after playing on a 6-27 team would have to be starry-eyed over the possibility of playing with Robinson this year, and get the waiver for the seven-footer, LSU might just make its greatest basketball turnaround since John Brady’s 1999-2000 team went from 12-15 the previous year to 28-6 and a trip to the NCAA Sweet Sixteen. A starting lineup of Duop Reath, Robinson, Brandon Sampson, Onwuasor and Waters (or sophomore Skylar Mays) could be very promising – staggeringly so considering what Wade inherited.

But if the waiver isn’t forthcoming and Robinson comes to LSU anyway, the result could prove that sometimes delayed gratification is far, far better than the alternative. Remember that the Tigers already have a commitment from Scotlandville High School senior-to-be Javonte Smart; the 6-4 guard is a consensus Top 15 recruit for the 2018 recruiting class. They’ve also had fellow Top 15 prospect Nazreon Reid, a dominant 6-10 forward from New Jersey, on campus for an official visit and appear to be in good shape to land him, and are also a strong possibility to land 6-7 forwards Darrius Days from Gainesville, Florida and Josh LeBlanc from Madison Prep in Baton Rouge, both of whom are ranked in at least one national recruiting service’s Top 100.

Add that group to Robinson coming off a redshirt year, plus Waters, Mays, Edwards, Sampson, Kiir, Alexander, Rachal and perhaps Bigby-Williams, and it’s a roster which is quite arguably the best in the history of the Tiger program. A threesome of Reid, Robinson and Smart would certainly rival the 1990-91 mind-boggling trio of Stanley Roberts, Shaquille O’Neal and Chris Jackson, but with what would appear to be better supporting talent and a coach in Wade who has all the makings of a national elite head man. That’s the kind of team which can go toe-to-toe with a Kentucky in regular season play and make a very, very deep run in the NCAA Tournament, and Wade could conceivably have it in only his second year.

It’s definitely heady stuff, and if Wade is able to pull off bringing Robinson LSU fans can be excused for a case of the vapors – or protracted time saying rosaries in thanks for the miracle brewing at the PMAC.

In case you don’t recognize just how big a potential turn Robinson could represent for the program, here are a few highlights of the Chalmette superstar…

And just a little more, this from the Nike Elite Youth Basketball League event in March against some all-star competition…

This is not wholly unlike a second bite at the Ben Simmons apple, but with better surrounding circumstances, for LSU. Best of luck to Wade in making it happen.

Interested in more news from Louisiana? We've got you covered! See More Louisiana News
Previous Article LSU On Mascot Search: We Have A Tiger Coming
Next Article MIRE: Government-Owned Internet Networks Are Bad Deals for Taxpayers