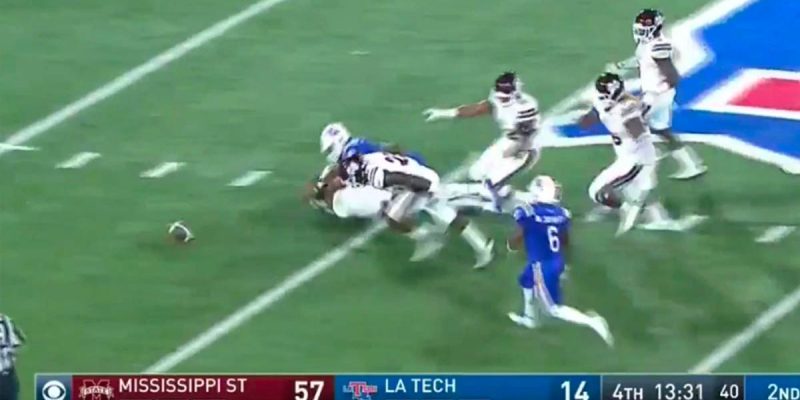 Courtesy of CBS Sports, on whose network the most improbably ridiculous play, perhaps in football history, happened toward the end of Mississippi State’s 57-21 blowout of the red, white and blue Bulldogs in Ruston Saturday night. Louisiana Tech was playing a second-and-goal from the State six yard line in the fourth quarter, attempting to salvage a little dignity on the back end of what was then a 57-14 game, and then this happened…

This play resulted in a loss of almost 90 yards.

HOW IS THIS EVEN REAL? pic.twitter.com/gsD9GulNaF

That’s right – they had to play a third and goal from their own seven yard line. That’s 3rd-and-93. No, Tech didn’t convert it. They did manage to get another touchdown late to produce the final margin.

The game contained a reasonably solid amount of idiocy as it was, seeing as though there were three missed extra points, a safety, a defensive touchdown on a 90-yard fumble return and a blocked punt for a touchdown – and those two touchdowns were both scored by a defensive tackle. And if you take out the 87-yard loss Louisiana Tech actually would have rushed for almost 250 yards against Mississippi State’s defense – something LSU, who plays State in Starkville on Saturday, can take some solace in.

But it’s been two weeks into the season and what we can tell so far is Mississippi State, who in Week 1 laid a 49-0 beatdown on Charleston Southern, is hell on the smaller teams. We’re going to find out a whole lot more about them when the Tigers visit Davis-Wade Stadium this weekend.

As for Tech, who pulled away from a 24-24 game in the third quarter to outlast Northwestern State 52-24 in the season opener, it’s been a feast-or-famine proposition. This doesn’t look like one of Skip Holtz’s best teams in Ruston – but he can take solace in the knowledge that things aren’t likely to get worse from here. State is probably the toughest opponent he’ll play all year (though Tech does travel to South Carolina at the end of September), and it’s inconceivable that he’ll suffer an 87-yard loss again this year…or any year.

Interested in more news from Louisiana? We've got you covered! See More Louisiana News
Previous Article APPEL: The Advocate, The Louisiana Budget Project And The Miserable “Louisiana Way”
Next Article VIDEO: Plus, There Was The Guy In A Cast Decking People At The LSU Tailgate