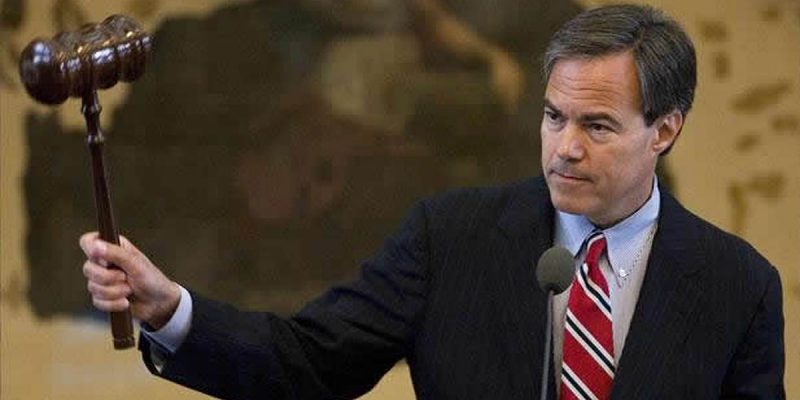 “I believe that in a representative democracy, those who serve in public office should do so for a time, not for a lifetime. And so I want you to know that my family and I have decided that I will not run for re-election next year,” Straus said in a campaign email. “My time as a State Representative and as Speaker will end at the conclusion of my current term.”

If Straus had remained in office and won the speakership, it would have been a record-breaking sixth term as leader of the chamber. First elected to his district in 2003, Straus has been speaker since 2009.

I first ran for the Texas House in 2005 to be a voice for our community and for the principles that I had spent years advancing behind the scenes. It did not occur to me that I would ever become Speaker of the House. (And I’ve learned that it didn’t occur to anyone else, either!)

However, after an unusual and unexpected chain of events, my 149 colleagues chose me to be our presiding officer less than four years later. I’ve since won re-election four times with the support of an overwhelming majority of House Members from each political party. In every legislative session, I’ve tried to bring real solutions to real challenges. For example, we’ve made significant gains in K-12 and higher education, water, transportation, and mental health care. But just as important as what we’ve done is the way in which we’ve done it. Even as politics has become more tribal and divisive, I’ve led by bringing people together and working across party lines. We’ve fallen short at times. But on our best days, we have shown that there is still a place for civility and statesmanship in American politics.

I believe that in a representative democracy, those who serve in public office should do so for a time, not for a lifetime. And so I want you to know that my family and I have decided that I will not run for re-election next year. My time as a State Representative and as Speaker will end at the conclusion of my current term.

Just as my ascension to the Speaker’s office was unconventional and my approach to governing is unusual in these divisive times, I know this is also an unexpected decision. It’s been decades since someone has left the Speaker’s office on his own terms. But we have accomplished what I had hoped the House would accomplish when I first entered this office, and I am increasingly eager to contribute to our state in new and different ways.

Instead of acting on behalf of the entire House, I will now have a greater opportunity to express my own views and priorities. I will also continue to work for a Republican Party that tries to bring Texans together instead of us pulling us apart. Our party should be dynamic and forward-thinking, and it should appeal to our diverse population with an optimistic vision that embraces the future. I plan to be a voice for Texans who want a more constructive and unifying approach to our challenges, from the White House on down.

One of my heroes, President George H.W. Bush, said, “Any definition of a successful life must include serving others.” I am grateful for the opportunity to lead the Texas House, and I look forward to talking to you more in the future about my continued service to the state of Texas.

Staring at the end of his tenure as Speaker of the Texas House of Representatives, Joe Straus finally decided to end his time as a representative (and thus as Speaker) rather than face a humiliating defeat during the next Speaker election. Prior to the announcement today, Straus had faced immense opposition against serving as Speaker again from dozens of county parties that pulled their support, conservative activist groups, and from within his own caucus. As such, his retirement from the House will be hailed by many as one of the greatest acts that he has performed in his career, stepping aside for someone who can truly advance a conservative agenda in the state of Texas alongside Governor Greg Abbott and Lieutenant Governor Dan Patrick.

However, based on his statement and an interview given following his announcement, there’s reason to believe this is not the last that we will see of Straus. With his discussion of his “continued service to the state of Texas,” there is reason to believe that Straus could potentially run in the Republican primary in 2018 for either governor or lieutenant governor. While Straus in a post-announcement interview said that he doesn’t currently intend to run for higher office, he certainly did not shut the door on a potential run, literally stating that he is “not one to close doors.” He went on to say that today was an announcement of “what I won’t be doing” when asked if he was going to run for governor. Based on the interview, it appears that Straus is indeed looking upwards, making for an interesting election cycle in 2018. Should he choose to run, Straus would face an incredibly difficult task in knocking off Abbott or Patrick. Both are still very popular with Texans, and both represent a set of values that more closely align with Republican voters in the state. That isn’t to mention the massive campaign warchests the two have amassed since 2014 in preparation for reelection. Straus would need to prove that his brand of Republican values is pragmatic and not obstructionist- something that this past legislative session and special session will be prone to proving false.

Texan politics, as per usual, remains quite exciting. Let’s just hope that this announcement can bring some true conservative change.

Interested in more news from Texas? We've got you covered! See More Texas News
Previous Article Texas University Tries To Start A Pointless “Dialogue” About Halloween
Next Article Doug Jones And The Democrats Are Making This Race Easy for Roy Moore