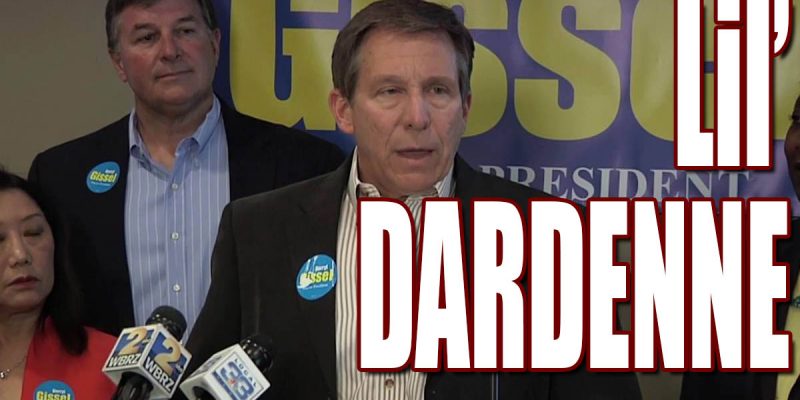 It would have looked bad if Gissel, who was an unsuccessful candidate for mayor of Baton Rouge last year running as an independent but had previously been a Republican, had gotten a job in the Broome administration on Day One.

That would have been seen as a straight political payoff for Gissel to have endorsed Broome in the runoff and played a sizable part in delivering some share of the 25 percent of East Baton Rouge Parish’s white vote (Gissel got six percent of the primary vote, and swinging that probably was decisive in the race) to Broome. People would have considered it to be sleazy and low rent, and there would have been accusations that Gissel prostituted himself and his endorsement in order to get a cushy, powerful job working in Broome’s administration.

Y’know, a bit like Jay Dardenne did with John Bel Edwards. Don’t call Gissel Lil’ Dardenne, though, because that isn’t nice and nobody will believe what he did was the same thing.

But after going 10 months without having a chief administrative officer, and having found perhaps the least qualified candidate possible in Troy Bell, who she hired for less than a week, certainly at this point no one will accuse Broome and Gissel of completing such a political payoff.

No, that would never, ever happen.

Gissel declines to comment, except to say, “I have always offered my support and help to the mayor.”

Gissel, who ran as a non-party candidate in the 2016 mayor’s race, later served on one of Broome’s transition teams. He is a native of New Orleans, who has lived in Baton Rouge for more than 30 years as a businessman and civic leader. He is also a former executive director of the Louisiana Republican Party and served as a special assistant to former Gov. Dave Treen in the early 1980s.

This wouldn’t be a political payoff because for it to be so, one would have to believe that Broome was capable of a long-range plan that would essentially dupe her core constituency into the idea that she would be hiring a CAO who “looks like us” and handle it in such a way that when the betrayal was made no one would be too exercised about it.

That would suppose a bit of political cognition that even Broome’s core supporters don’t ascribe to her.

So no, nobody is going to see the hiring of Gissel as the CAO, a job he’s manifestly unqualified for (he’s a real estate agent in Spanish Town), as a political payoff. Remember, after all, that Broome said she’d gotten the Baton Rouge Area Chamber and the Baton Rouge Area Foundation to kick in for the cost of the CAO search – so if the search turns up a real estate agent without a lick of public policy or large organizational executive experience as the chief administrative officer of a city-parish of over 400,000 people, which faces more debt risk than all but four other large American cities and a growing incorporation movement among a large number of its wealthier citizens while being inundated with violent crime and battling traffic gridlock on a daily basis, then clearly that’s going to be a call made on the basis of merit.

Not a political payoff. Because nobody is going to believe that now.

“Darryl’s passion for bringing our parish together reflects my own strong desire to unite us around a plan and vision to reduce traffic and crime in the parish,” Broome said. “I look forward to working with Darryl in the campaign and hopefully in my administration.”

Well, yeah, but that was a long time ago. Right?