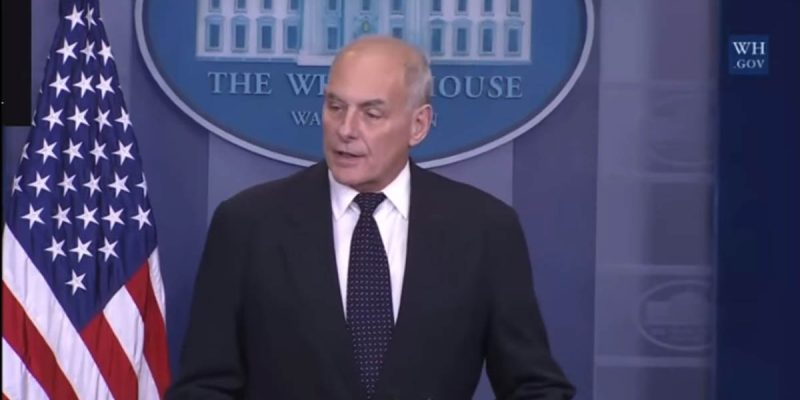 We say this, because Kelly hit a towering, game-ending blast of a home run today in response to the manufactured and disgusting controversy ginned up by Florida congresswoman Frederica Wilson over a phone call President Trump made to the widow of Sgt. La David Johnson, one of four soldiers killed in an unspecified military mission in the African nation of Niger.

The controversy blew up this week after Trump called Myeshia Johnson, the widow of the fallen soldier, to express his condolences for the family’s loss. As it happened Wilson was on hand for the call and listening in, and then attacked the president for a supposedly uncaring and disrespectful tone. Wilson said that Trump dismissed the soldier’s act of sacrifice by saying “he knew what he signed up for” – a contention which Trump vigorously protested. Wilson also called it a sign of disrespect that Trump referred to Johnson as “your guy” during the phone call.

The White House released the complete statement the president made to the grieving widow, and in context it doesn’t make Wilson look particularly credible (this is the Quote Of The Day here at the Hayride, in case you haven’t noticed)…

“They know the risk, they know what they sign up for but they still volunteer to put their lives on the line for their fellow Americans. We owe them a debt that can never be repaid.”

That’s a little different animal than Wilson presented to the public, and it makes idiots out of the people who ascribed credibility to her. Wilson, after all, was the demagogue who, when the Trayvon Martin case first surfaced in the public eye, asserted that Martin – shot to death by George Zimmerman as the teenager was pounding Zimmerman’s head into the pavement – was “racially profiled” and “hunted down.” She is most certainly not someone whose statements ought to be taken at face value.

Kelly gave a 20-minute tour de force of a press conference describing the method by which the government processes soldiers lost on the battlefield, from how their bodies are handled in transport back home and how the loss is communicated to the next of kin. It’s a method he knows well; not only was Kelly a Marine general, he’s also a Gold Star father who lost a son in the Afghan War.

But Kelly spent the most poignant moment of the conference debunking and rebuking Wilson for having started the firestorm, including recounting a story of his own experience with her. In 2015, a new FBI regional building in Miami was dedicated, named after a pair of agents killed in a firefight with drug traffickers in the 1980’s, and at the dedication ceremony which Kelly attended various figures from law enforcement and other walks of life gave tribute to the fallen agents in whose honor the building was being christened. Kelly says that Wilson, who represents an area of north Miami, gave her own speech – and rather than honor those the building was dedicated for she chose to honor herself, boasting that she had made the call to President Obama which secured the $20 million to fund the building’s construction.

Kelly noted the old military saying that an empty barrel sounds the loudest, which surely describes Wilson – she of the asinine cowboy hats and a demand they be allowed on the House floor in violation of a century-old tradition. And he said he was “stunned” that a member of Congress would be listening in on such a call as the one Trump made in an attempt to console Johnson’s widow.

It was a crystal-clear demonstration of the difference between responsible, competent leaders and low-life political demagogues. It’s possible, and hopefully likely, that Kelly’s intervention in this matter put it to rest once and for all, though Wilson has repeatedly demonstrated her proclivity for divisive, petty and race-baiting publicity stunts. She won’t likely go away until the political process purges itself of her, and that’s something only her constituents can control.