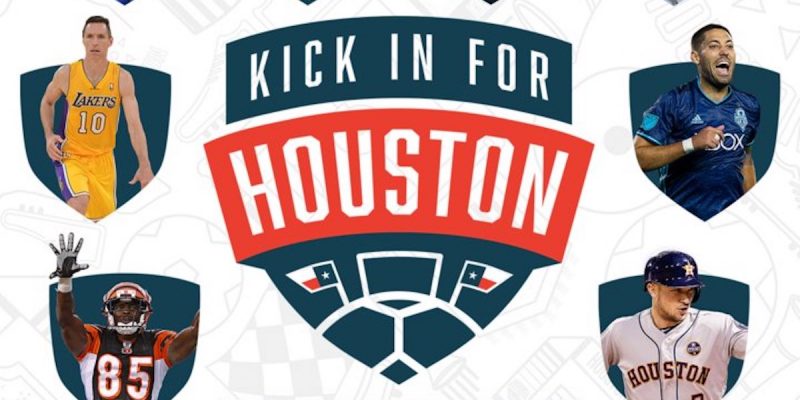 Famous athletes traveled to Houston to play soccer at the BBVA Compass Stadium and raise money for Hurricane Harvey victims who are still struggling three months after the worst flooding event in U.S. history. Viewers can watch the Celebrity Soccer game today at 5 p.m. CST, which was created and hosted by former Houston Dynamo & US Men’s National team member, Stu Holden.

With commitments from some of the biggest soccer and sporting personalities in the United States, Holden hopes that this event will be an opportunity to bring the community together, raise money for flood and hurricane victims, and show that despite the uphill battle they face, the great state of Texas will persevere and stand together, #HoustonStrong

Sports commentators and athletes took to social media yesterday to promote the event and encourage people to watch the game, buy tickets, and donate.

So full of admiration for @stuholden who has worked tirelessly to put #KickInForHouston together for his hometown. Join us tonight at the stadium, watch tomorrow 3:30p PT on FS1, and donate to Harvey relief at https://t.co/x2w9Q8XNAY now! pic.twitter.com/B1HKy7czM1

Love being back in Houston helping a great cause. Looking forward to the game tomorrow #KickInForHouston pic.twitter.com/zePWVjxfij

Today…..#KickInForHouston
Please help us to help the victims of Hurricane Harvey@stuholden and his friends in a "Celebrity SOCCER match"@HoustonDynamo
And… you can watch the game tomorrow
On @FS1 @FOXDeportes @FOXSoccer
Camoooon #HoustonStrong pic.twitter.com/MnFz4Zfmxp