On January 11, 2018, Mark Zuckerberg announced that the social media giant Facebook was making significant changes to its news feed algorithm. The biggest change is its effort to reduce public news content from showing up on individual’s pages and news feeds. Businesses are likely to pay more to have to their posts show up on news feeds.

One reasoning is that “Facebook is going back to its roots” to prioritize posts from family, friends, and groups in people’s news feeds. However, others argue it’s just another form of censorship.

AT&T recently called on Congress to enact an “Internet Bill of Rights,” arguing that Facebook and Google should be subjected to rules designed to prevent these companies from censoring their users. Breitbart News reports:

AT&T, one of the largest telecommunications companies, called for Congress to enact an “Internet Bill of Rights” which would subject Facebook, Google, and other content providers to rules that would prevent unfair censorship on Internet Service Providers (ISPs) such as Comcast or AT&T as well as content providers such as Facebook and Google.

Congressional action is needed to establish an ‘Internet Bill of Rights’ that applies to all internet companies and guarantees neutrality, transparency, openness, non-discrimination and privacy protection for all internet users.

The ad is available online and below: 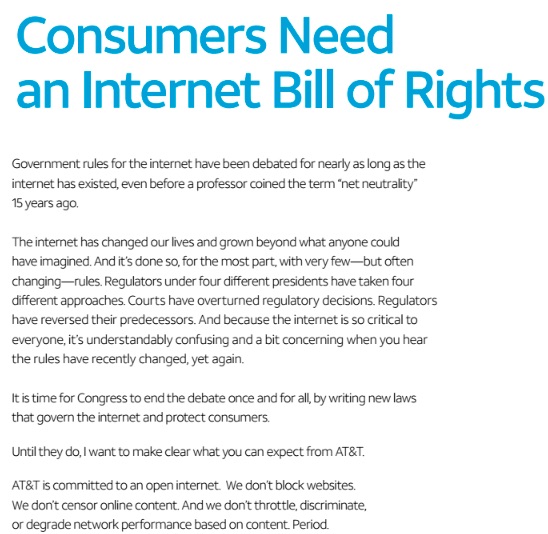 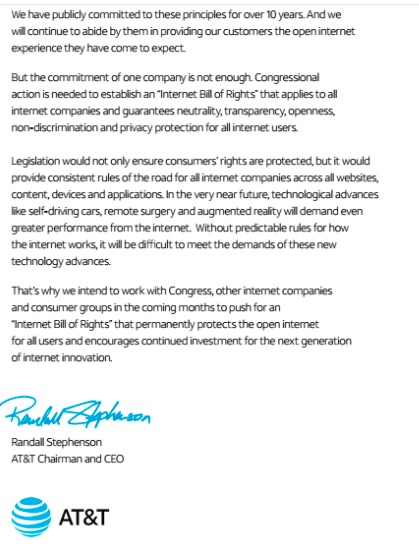 Tennessee Congresswoman Marsha Blackburn introduced the Open Internet Preservation Act after the FCC overruled the so-called “Net Neutrality” act. She told Breitbart News that Congress should discuss requiring Facebook, Google, and other content providers, to be transparent about their censorship practices. She asked,

These companies want to control what you think, what you read, prioritization – look at how Google prioritizes search.