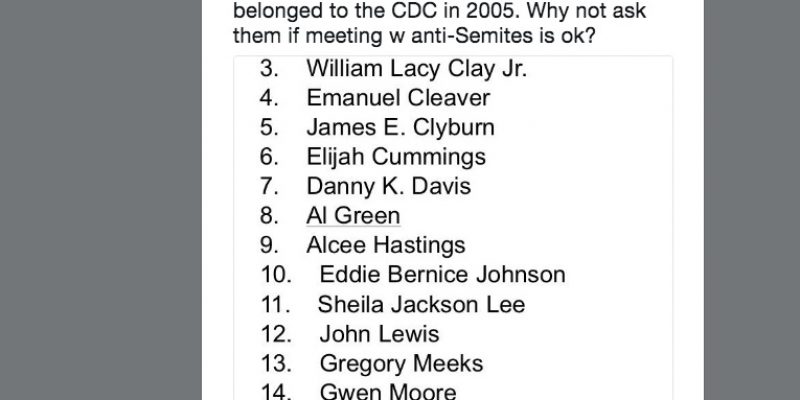 Twenty-one members of the Congressional Black Caucus met with Louis Farrakhan, leader of the Nation of Islam and avid anti-Semite in 2005. And, apparently the press didn’t care, or cared not to report on it then, or now.

Texas Congresswoman Sheila Jackson Lee, famous for her inane comments and for taking a school teacher’s seat from her on a Houston flight, is #11 on the list of 21.

So, what is their connection to anti-Semitism and to Farrakhan, former White House Press Secretary Ari Fleischer asked in a recent tweet:

Since the press hasn’t covered the fact that members of the Congressional Black Caucus in 2005 met with anti-Semite Louis Farrakhan, I’ll make coverage easier. Here are 21 members of Congress today who belonged to the CDC in 2005. Why not ask them if meeting w anti-Semites is ok? pic.twitter.com/TjDlKAstMp

For heavens sake. Some snowflake complained to Twitter about my tweet criticizing the Congressional Black Caucus for its meeting with Louis Farrakhan.

So for the person who complained, I guess meeting with Farrakhan is ok. Free speech is not.

Fleischer goes on to state that he doesn’t understand why meeting with someone who hates Jews isn’t a scandal, and points to the double standards of the media and liberals.

I really don’t understand how hard-hitting, neutral reporters don’t think a meeting – that they only learned of now – between Congressmen and Farrakhan is not a scandal. If it was the Freedom Caucus and David Duke, it would be a full feeding frenzy. But Farrakhan is ok?

It still remains unclear what Sheila Jackson Lee’s involvement is with anti-Semitism. Why did she and the Congressional Black Caucus meet with Farrakhan?