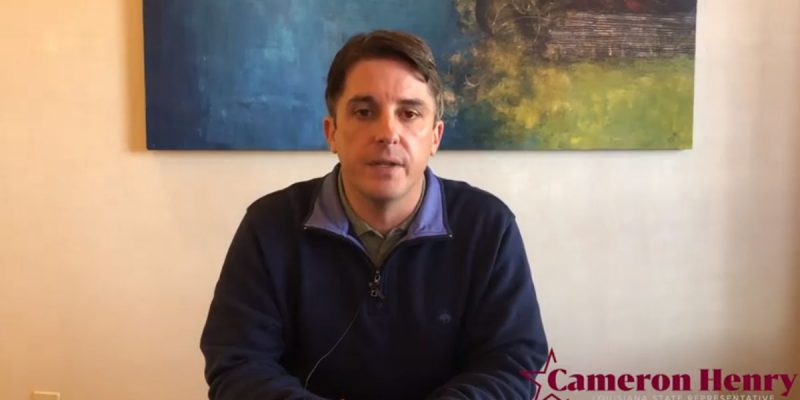 We’re starting to see these video updates from Louisiana House Appropriations Committee chairman Cameron Henry as something of a go-to for the conservative position on the state’s budget process, because Henry does such a succinct job of presenting the alternative viewpoint to the sometimes-overwhelming media narrative Gov. John Bel Edwards and his allies at the state’s newspapers cover Louisiana with.

Henry’s fun to watch because he’s not particularly impressed by or afraid of the “sky is falling” act Edwards and the rest of the tax-raisers permanently employ where it comes to the budget, and he pushes back against it without any of the drama or histrionics the governor is becoming famous for. But that doesn’t mean he doesn’t get his digs in – last year, for example, Henry coined the term “fear season” to describe Edwards’ practice of sounding alarms about all the vital things in state government that would be cut if he didn’t get his tax increases.

In this video, though, Henry doesn’t opt for any major digs at the governor – though Henry clearly had an opportunity or two to do so. As he notes, Edwards presented his ideas to raise taxes by $994 million to the Joint Legislative Committee on the Budget in an effort to balance Louisiana’s budget, made unbalanced by that amount because of the expiration of an extra penny of state sales tax on July 1 of this year, but so far there is no showing that Edwards’ ideas will actually fill that $994 million hole; we know that his tax ideas will certainly negatively impact Louisiana’s faltering economy and more than likely will fall short of their projected revenues as business relocates elsewhere to avoid the uncompetitive economic climate those taxes will engender, but we have yet to see any of his tax ideas vetted by the state legislative fiscal office for projected revenues.

Henry says those tax ideas will fall short of $994 million. In this he’s echoing the sentiments of LABI President Stephen Waguespack, who called Edwards’ presentation to JLCB an “embarrassment” and noted that Edwards’ practice of demanding that the state legislature present him with ideas on budget cuts is dishonest because the governor is the one with the resources to dig into the budgets of his state agencies and find potential savings, not a bunch of part-time state legislators without much in the way of staff. And if Edwards doesn’t have any cuts he can support and his tax ideas don’t raise $994 million, who is he to castigate anyone else for a lack of seriousness in solving the state’s budget problems?

Henry doesn’t go that far, as he’s clearly trying not to appear as the bad guy in budget negotiations which don’t currently look like they’ll have a happy ending. He knows these are still early days and it’s probably better not to show anger or frustration yet when the rhetoric from the other side will surely escalate anyway.

But he’s also not biting on the governor’s framework for calling a special session before this year’s regular legislative meeting in order to raise taxes. Edwards has said he won’t call one if he and the legislature don’t come to an agreement beforehand on a tax hike plan, which is a statement nobody in the legislature seems to have much use for. After all, state law says no taxes can be passed in this year’s legislative session, so if there is no special session – or if one is called and those taxes don’t pass – then the “fiscal cliff” will be resolved by budget cuts and budget cuts alone.

Henry makes a great point that Edwards is playing a double game of sorts – counting on positive economic benefits from the Trump tax reform plan to bolster the state’s fiscal picture while at the same time counting on tax increases to remedy the fiscal cliff. That doesn’t really fly – either tax cuts help the economy or they don’t, and Edwards seems to believe that federal tax cuts will help while his tax increases won’t hurt. It’s hard to take such a position seriously.

With a state budget of some $30 billion all told, the largest in Louisiana history, Henry’s position that there are lots of places the budget could be trimmed is not an unreasonable one. But he’ll need a lot more videos like this one, not to mention vocal support from his colleagues on a continuous basis, in order to get the word out.

Interested in more news from Louisiana? We've got you covered! See More Louisiana News
Previous Article Was A Rap Video The Reason LSU Players Were Suspended For Tomorrow Night’s Game?
Next Article How About The Wake-Up Call ExxonMobil Gave To JBE And Sharon Weston Broome Yesterday?