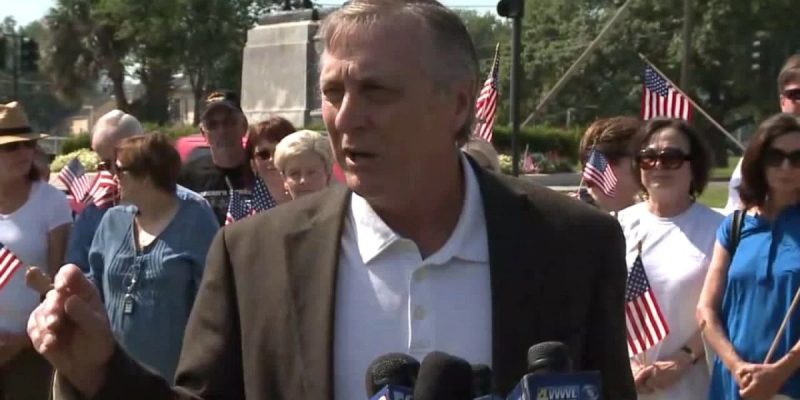 Maybe that’s not quite right. Perhaps he actually is kind – unless and until someone from the Hayride’s staff endeavors to actually read Mayor Landrieu’s maiden voyage as an author we can’t quite say which is which.

What we can say is this review, written by Richard Marksbury, the Dean of the School of Continuing Education at Tulane and an active campaigner against Landrieu’s crusade to destroy several of New Orleans’ historical landmarks, has to make for more entertaining reading than the book itself. We think most of our readers are inclined to agree…

Today, while giving two exams at Tulane, I managed to read all of Landrieu’s book. Completing it was not hard to do since it is written at a high school level. In addition, since every [fifth] word was “I”, reading it went faster. It was a repellant experience, and I am grateful it is over. I thought I would share some tidbits from the Landrieu magnum opus.

Page 49…he writes: ”The systemic evil of Nazism was the closest thing to the Southern society that relied on slave labor.”….Really Mitch? Why “Southern” Mitch? After all, slave labor was found throughout the United States from its infancy through most of the first half of the 19th century. New jersey ended it in 1846, I believe. Rhode Island ports (Newport) received 50% of all slave ships coming to the Colonies and States. But, Mitch needs to attack the South for his personal reasons.

Page 77..Mitch likes to refer to the neo-Nazis in Charlottesville, but he chooses to ignore the violence of the ANTIFA who were also at Charlottesville. Same page…Mitch writes that “SOUTHERNERS long before our day had subjugated African Americans so ruthlessly”. Mitch, Northerners had slaves too for more than a hundred years. But, Mitch needs to beat on the South.

Page 69…sorry Mitch, you got it wrong again, David Duke not put on a Nazi uniform and walk across the LSU campus (which he wrote twice). Duke did this on the Tulane campus (on McAlister Drive to be exact). But Mitch need not be accurate for his target audience.

Page 102..Mitch writes about the immediate aftermath of Katrina stating that “Rumors abounded in the chaos of those first few days, there was widespread talk of looting….” THERE was looting Mitch, but nice attempt to suggest there was none.

Page 111…Mitch writes about poverty in New Orleans post-Katrina. He wrote, “The War on Poverty, so derided by the right, had barely more than a decade, whereas a century had passed between the Civil War and the Civil Rights Movement…”.

Mitch is not very good in math it seems, for on Page 66, he provides an analysis of the War on Poverty and clearly states it was launched in 1964. Well, Mitch, 1964 to 2005 is not “barely more than a decade”…it is more than half a century!

Page 112…Mitch points out that “Katrina gave the Lower Ninth Ward, nearly 100 percent black, and Lakeview, which was over 90 percent white, a water beating…” Then he writes, “Twelve years later, Lakeview has recovered…” why??? Mitch says..because of racism. Well, I think many in Lakeview do not believe their community has “recovered” totally from Katrina.

Katrina Chapter…Mitch praises how black and white, and rich and poor ALL worked together to rebuild New Orleans. Yet, just a few pages later, he bemoans the institutional racism in New Orleans which divided the city horribly and that is why he decided to do something about the monuments.

Page 122..When writing about Nagin, again Mitch has a crystal ball when he wrote: “, Nagin’s top contributors were from wealthy, old-line white families who thought they could control the mayor”. The real IRONY is that these same wealthy, old-line white families who supported Nagin supported Landrieu both times he ran for mayor. Was Mitch a member of their inner circle since he knew their goal was to control Nagin?

Page 135..Mitch takes pride in establishing an organization in his office which administered “from the bottom up” Well, his decision to take down the monuments was a classic case of “top down management”. Give the people a vote on the monuments??..never.

Page 140…when referring to the Charter School movement in postKatrina New Orleans, Mitch refers to the controversy as an “Adult issue”…Mitch, what exactly is an “adult issue”?

Page 162…Mitch spends several pages writing about the murder rate in New Orleans. Reading his words, one would think Mitch worked on solving the murder rate 24/7..really. Mitch states that under his leadership, New Orleans had the lowest number of murders in a quarter century. What Mitch ignores is that the important figure is NOT the number of murders, but the “murder rate” per 100,000 citizens. That is how the FBI and most crime statisticians count murders. Well, Mitch conveniently ignored the CBS News piece on murder rates in 2017 in major US Cities. Mitch, New Orleans was #3 while you were tearing down monuments and traveling about the country promoting yourself. CBS WROTE: “The murder rate in New Orleans is 24.5 persons per 100,000.96 people were murdered in the city in the first half of 2017, and the murder rate jumped by nearly 30% when compared to last year (2016).

Page 149…Mitch wrote that one “of the biggest sticks that was used against me in taking down the monuments was that I should be focused on murder, not monuments”…Well Mitch, it was not a “stick” it was the truth. If not the murder rate, how about the issues in the Sewerage & Water Board which you oversaw. Mitch then moans that those of us who wanted the monuments to remain up but we never volunteered our time to work with him on solving the murder rate. Mitch can write what he wants, but we know he constantly sought national publicity for his stand on the monuments, and I do not recall Mitch bringing up the New Orleans murder rate on 60 Minutes, MSNBC, CNN, Fox News, or with the New York Times. His section on the murder rate in New Orleans is truly the saddest and most laughable thing he wrote in this sad book..

Page 151…still on murders…When writing about the black-on-black murder rate in the US, Mitch decides to single-out Congress, he writes: The response in Congress has been tepid because of the racial dynamics: most of the victims are young blacks, not part of the Republican base, not worth offending the powerful National Rifle Association”….WOW, Mitch hits all the talking points in a single sentence. He seems to forget that this murder issue of young blacks has been going on for decades. During some of those times, Democrats controlled the Presidency, and/or Congress. What Mitch fails to mention, since it would hurt him, is that the Congressional Black Caucus has not assumed the position of being THE SPOKESPERSONS for the issue of black-on-black murder. They, of all people, should constantly beat the drum on this issue to ensure that it is front-and-center. They choose not to do so, and Mitch is silent about it.

Page 168…Lee…Mitch gets his information from the Southern Poverty Law Center…they are objective, huh? Mitch learned that the Lost Cause monuments were put up in two different “Jim Crow era periods”. He writes the first period “began around 1900” and the second period began “in the early 1950’s”. MESSAGE TO MITCH..The Robert E. Lee statue was erected in 1884. Thus, according to Mitch and the Southern Poverty Law Center, the Lee Monument was put up 16 years before the first period of Jim Crow monuments were erected. So, according to Mitch, the Lee statue is not a Jim Crow statue! Someone tell The Advocate.

Page 170…Mitch tries to explain the long-standing diversity in New Orleans. Multiple times he refers to New Orleans as the biggest slave auction in the United States. He refers to New Orleans as having a “multicultural community” during the years before the Civil War. He is correct. But, Mitch fails to educate the public about the very large number of “free persons of color” in New Orleans who owned slaves. In fact, New Orleans had more “free persons of color slave owners than any other American City”. WHY did you omit this fact Mitch? After all, on page 209. You wrote “Truth is important because anything but the whole truth and nothing but the truth will lead us astray”. That being the case, why did MITCH not tell, or share, the truth about the number of slave-owning freed blacks in New Orleans when Louisiana seceded from the United States? One of the country’s leading African American historians, Duke University professor John Hope Franklin, records that in New Orleans over 3,000 free Negroes owned slaves, or 28 percent of the free Negroes in that city. Seems like Mitch forget to mention this as a Truthful statement for our tricentennial. POINT…If Mitch does not say it is the truth, then it is not the truth.

Page 178…our dear old friend, Walter Isaacson When Mitch told Isaacson about his plan and what Wynton Marsalis had told him, he quotes Isaacson as saying; “I agree with Wynton…They ought to come down –the monuments don’t really represent New Orleans. Seems we have another person speaking with forked-tongue…On August 15, 2017, Isaacson was on the nationally broadcast radio show hosted by Laura Ingram in which the unequivocally stated that he believed “Beauregard should never have been taken down since he was different from the others”…

In case you were wondering, Mitch’s favorite word in his book is “I”. I did not count the number of times he used it, but it is well into the hundreds and likely a 1000 times. For you scholars, it should be noted that there is NOT ONE REFERENCE cited in his 200 page masterwork. Mitch does not need to provide references for his writings, for he has assured us he is telling the TRUTH.

SAVE YOUR MONEY AND BUY 10 Lottery tickets instead of this book.

What we understand is that Professor Marksbury is no particular hard-Right conservative. He’s just not a cultural Marxist or an aspiring Democrat politician. That would account for his rather clear-eyed and historically-informed review of Landrieu’s unfortunate book.

One gets the impression Landrieu’s wannabe presidential campaign might end up stillborn. That’s unfortunate, for the loss of entertainment value it would provide – at least if his pre-campaign book is any indication of what’s in his bag of tricks.

Interested in more national news? We've got you covered! See More National News
Previous Article On The Issue Of TOPS, And The Plot Against Funding It
Next Article Maybe Denise Marcelle Ought To Run For District Attorney In Baton Rouge…