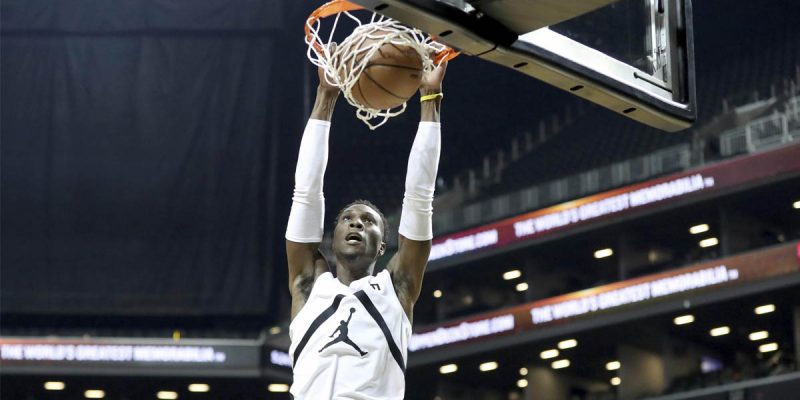 We haven’t done an LSU basketball post lately, so we figured it was time to catch up on the exploits of Will Wade and his hoops program as we move through what’s going to feel like an interminably long offseason.

Which is a little different for LSU basketball. Most years in recent times, we’ve been more than happy to get to an offseason and forget about LSU hoops until the next November, as there wasn’t much to look forward to. The preseason in advance of Ben Simmons’ arrival in 2015 was the exception to that rule; otherwise it’s been more or less a decade without much in the way of expectations that LSU would be relevant on the national basketball scene.

Well, yesterday there was a development which signaled pretty clearly that Wade will have the Tigers in the national mix this coming winter. Two of the four LSU commitments for the coming season, signee Ja’Vonte Smart of Scotlandville High School in Baton Rouge and verbal commitment Emmitt Williams of Oak Ridge High in Orlando, Florida, were in action at the Jordan Brand Classic all-star game in Brooklyn, New York yesterday, and both played awfully well.

Smart poured in 15 points, adding three assists and three steals in a strong performance. He was 5-for-8 from the flor, including 3-for-6 from the three-point line.

And Williams had FORTY-FOUR POINTS on 22-of-23 shooting, with seven rebounds, three steals and two assists.

Williams is No. 5 on the team wearing white. It won’t take long for you to notice which one he is…

Admittedly, they don’t play college-level defense at the Jordan Brand game. And practically every shot Williams attempted was a dunk, which he’s not going to be able to do in the SEC.

But that’s a ridiculously good finisher in the lane.

And couple Williams’ performance at the Jordan Brand Classic with the double-double LSU’s highest-rated recruit Naz Reid posted (15 points, 11 rebounds) at the McDonald’s All-American game a couple of weeks ago, and what you have is a flat-out amazing recruiting class on the way to Baton Rouge.

There’s a reason why the Sporting News’ way-too-early preseason Top 25 listed LSU at No. 13, which was only a little higher than a number of other publications listed the Tigers…

That’s a long way from the 10-21 season LSU had a year ago before Wade was hired. It’s been a fairly quick rise so far.

Interestingly, with the departure of little-used freshmen Mayan Kiir and Galen Alexander from this past year’s team due to transfers, Wade still has a pair of scholarships to play with this summer. As the crop of incoming freshmen is more or less exhausted as few (if any) high-quality recruits remain uncommitted, Wade is mostly looking for junior-college and Division 1 transfers to fill those two spots on the roster. One name which has surfaced is a player who wouldn’t help this year but could make a difference on the 2019-20 team – guard Don Coleman, who is transferring from the University of California after averaging 14 points per game on a bad team. Coleman, 6-2, is known as a tenacious defender and a fearless penetrator who gets to the foul line, though he didn’t shoot a very good percentage from the three-point line this year. He’d be a role player who would replace Daryl Edwards when the upcoming senior graduates after this year.

Wade is also looking for a big man to supply depth in the frontcourt behind Kavell Bigby-Williams, Reid, Williams and Days, and two names we’ve heard would fit that bill. Both would have multiple years of eligibility remaining, which is crucial for LSU as Bigby-Williams will be a senior and Reid is expected to be a one-and-done player on his way to the NBA. So 6-9, 240-pound Wyatt Walker of Samford, who averaged 13 points and 10 rebounds as a sophomore in 2016-17 but played only two games this past year before an injury forced him to redshirt, would fit that bill. Walker has two years of eligibility remaining and could play immediately as a graduate transfer.

And another name who has come up as a possibility for LSU is 6-9, 205-pound Courtese Cooper, a junior college transfer from Triton College in Illinois. Cooper was a freshman at Triton this year but was academically eligible out of high school and can therefore transfer to a Division 1 school with three years of eligibility. As a freshman he averaged 10 points, seven rebounds and three blocked shots per game as the center on a team which won the Division 2 NJCAA title; he’s a bit of a project and needs to add 25 pounds of muscle but has some athleticism and exceptionally long arms to protect the rim with.

But the late additions won’t likely be the focus of this upcoming season. It’ll be Reid, Williams, Days and Smart, together with Bigby-Williams, Tremont Waters and the rest of LSU’s returning cast – Skylar Mays, Brandon Sampson, Brandon Rachal, Edwards and Wayde Sims – making up LSU’s likely playing rotation. What should be fun is the debate over the starting lineup – it’s assumed that Reid and Waters will surely be starters, but who will be the other three? Does LSU use Mays and Smart with Waters in a three-point guard lineup? Does Wade go big with Williams and Bigby-Williams in the lineup with Reid? Will Sampson or Rachal crack the lineup as a wing?

It’s fun to have those arguments when there aren’t any bad options to debate. That’s a bit different than the way things have been at LSU for most of the last decade. For that we owe thanks to Wade. LSU hoops is fun again.

Interested in more news from Louisiana? We've got you covered! See More Louisiana News
Previous Article Louisiana Ranks #1 as “Most Stressed State” in 2017
Next Article Facebook to disclose today if users had their data “improperly shared”