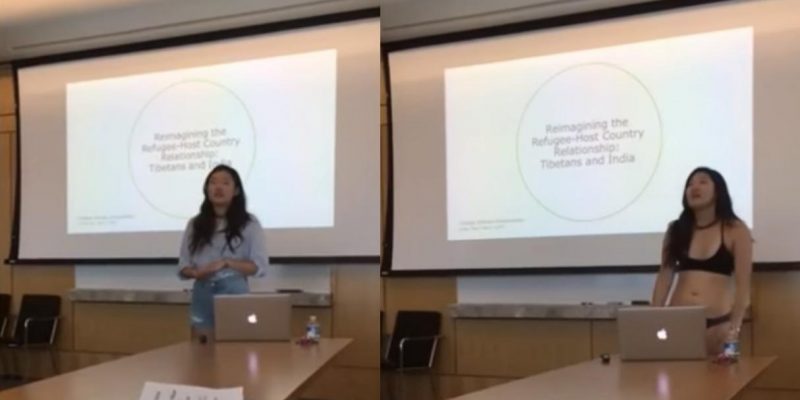 A Cornell University student stripped during her thesis presentation to protest her professor. The student then got two dozen other students to join in and broadcast the “protest” on Facebook Live.

Letitia Chai led the “protest” to protest remarks by her professor, Rebekah Maggor. Maggor told Chai that her cut off denim shorts were too short.

A Cornell University senior stripped to her bra and underwear during her thesis presentation — and got two dozen others to join in — to protest her professor’s contention the week before that her clothing was inappropriate.

Letitia Chai led the revealing demonstration Saturday during her “Acting in Public: Performance in Everyday Life” class to stand up “against oppressive beliefs,” she said in a Facebook Live video of the event.

It came days after her professor, Rebekah Maggor, questioned whether the denim cutoff shorts Chai was wearing during a test run of the presentation were too short.

“The first thing that the professor said to me was ‘is that really what you would wear?” Chai wrote in a Facebook post about the incident. “The professor proceeded to tell me, in front of my whole class, that I was inviting the male gaze away from the content of my presentation and onto my body,” she wrote.

“I think that I was so taken aback that I didn’t really know how to respond,” she told the Cornell Sun.

If Chai wanted to be respected, stripping in class is not exactly the best way to go about obtaining it. Instead, she has become a laughing stock.

Even worse than that, she’s not even attractive. She reminds us of “Mattress Girl” Emma Sulkowicz who made a poorly received “artistic” sex tape of her alleged rape.

As for Professor Maggor, other students in the class have come to her defense. 11 of her 13 classmates issued a statement explaining that the professor was just urging the importance of professionalism in speaking situations.

“[Maggor] is a gift to Cornell,” the statement read, stating that the students felt Chai’s post did not “adequately represent [Maggor’s] past and continued advocacy for women and minorities” and that Maggor had “apologized on more than one occasion.”

If feminists want to be taken seriously, they should act seriously. Stripping in class is not the way to promote women’s equality or even to promote respect between the genders.