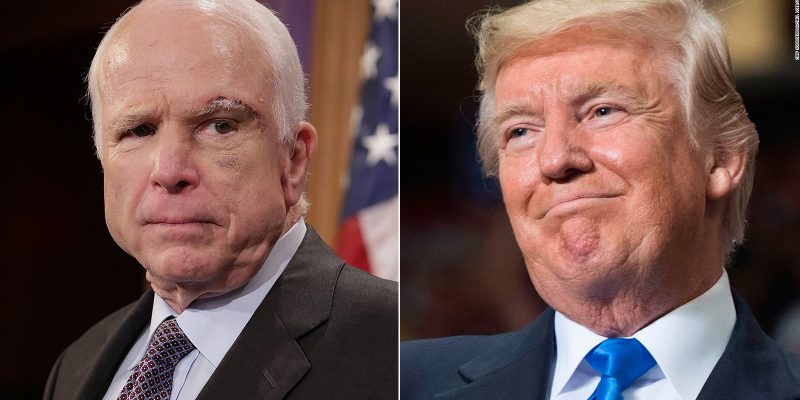 John McCain, the six-term Senator who is ailing from his battle with an aggressive brain cancer, has reportedly told friends to inform the White House that President Donald Trump is not welcome at his funeral, asking for Vice President Mike Pence to be sent instead.

Sources close to the former Presidential candidate say that the funeral service is planned to be held at Washington’s National Cathedral and will include eulogies from former Presidents George W. Bush and Barack Obama.

McCain, 81 has been making the most of his time by visiting with friends, finishing his memoir and reflecting on his life. This reportedly included a visit with former Vice President Joe Biden who he urged to stay in politics, an embrace of his son-in-law with the words “take care of my daughter” and the regret of selecting Sarah Palin as his running-mate.

A brief history of the feud:

Donald Trump has had a strained relationship with John McCain since his Presidential announcement. The Senator was one of the first to publicly criticize the well-known “drug dealers, rapists” comment from Trump’s announcement speech. Soon after, McCain refused to attend a campaign rally in his home state of Arizona, solidifying their rivalry.

Then-candidate Trump ridiculed McCain at the rally in Phoenix:

“We have incompetent politicians, not only the President. I mean, right here, in your own state, you have John McCain.”

The Senator called the comments “very hurtful” and alleged that Trump “fired up the crazies”. Donald demanded an apology and called John a “dummy” for graduating last in his class at the military academy before calling for him to be “defeated in the primaries.”

The feud reached its peak when Trump disparaged the former POW’s military service in a July 2017 interview when he said that he was “a war hero because he was captured” and he liked “people that weren’t captured.” The cringe-worthy comment referred to McCain being shot down and held for 5 years in Vietnam. However, McCain still maintained that he would support the Republican nominee, even if it were Trump.

The two seemed to end their feud in August and October of 2016 when Trump endorsed McCain for re-election and the Senator defended comments Trump made about PTSD.

However, after the well-known Access Hollywood tapes were leaked, McCain finally withdrew his support for the Republican nominee.

The feud has continued into the Trump Presidency. In July 2017, Senator McCain was the deciding vote that sank the “repeal and replace” Obamacare package. In a dramatic display of defiance, the Senator reached out his fist before doing a thumbs-down motion which shocked political analysts across the nation.

After the vote, a reporter asked the question that was on everyone’s mind: