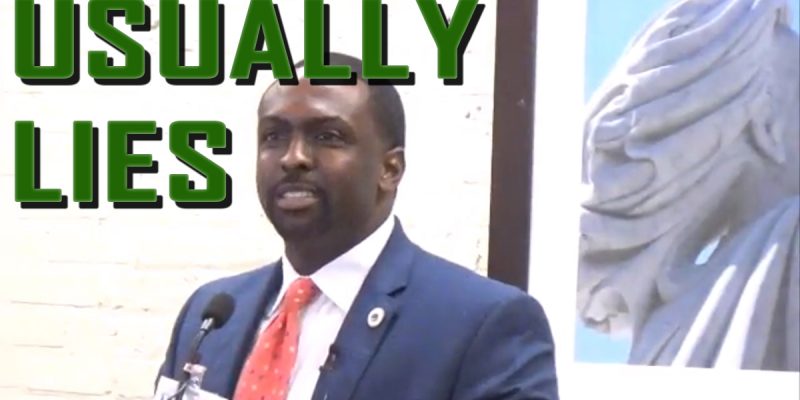 One of the more provably false allegations made by Louisiana Gov. John Bel Edwards when he addressed the opening of the legislative session that began this afternoon is that there are “out of state” entities trying to subvert his policy aims. This is a talking point aimed at Americans for Prosperity, which is a national conservative organization with a fairly active Louisiana chapter run by John Kay, who grew up in Shreveport and graduated from LSU (though seeing as though Kay is a Dallas Cowboys fan, it’s easy for people with quite a bit more good faith than Edwards to mistake him for an out-of-stater). Kay’s Louisiana lineage is a provable fact, as is that of virtually his entire staff and almost all of the volunteers who attend AFP events on a regular basis, but that doesn’t stop Edwards and his allies from perpetuating that lie.

One of those allies being Baton Rouge Democrat state representative Ted James, who does his best to make himself ubiquitous where the Louisiana legislature is concerned and who isn’t shy about spreading falsehoods to smear those who disagree with him politically.

And James picked up on Edwards’ talking point about “out-of-state agitators” even before the governor used it this afternoon. James was addressing the Baton Rouge Press Club at lunchtime and ran that lie out there to the media members, not counting on the fact that our pal Robert Burns of Sound Off, Louisiana! was there videoing his appearance. And Burns, who is an AFP volunteer and a Louisiana lifer, called James on the lie by offering his own story.

The old saying, “hilarity ensued” applies here, as James babbled his way to a response before trying to settle on a defensible statement that AFP is FUNDED by out of state money. Which is fine, except that’s an indictment which can be made of every single left-wing group James espouses the virtues of – from Planned Parenthood to the Louisiana Budget Project to the Poor People’s Campaign. If that’s the best he’s got, he doesn’t have much to offer.

And it’s also quite entertaining to hear James, challenged to produce a source for his allegation that AFP’s workers are from outside Louisiana, mumbles “my colleagues” in answer – except he doesn’t name any. He just refers to the ones who are having door-knockers in their districts, all of whom are Republicans, and then claims AFP isn’t door-knocking in his district because they know he isn’t scared of them. As though that’s an indication of how tough he is, or something.

It’s a truly ridiculous performance, and one which will get precisely zero coverage in the legacy media. We thought we’d bring it to you for entertainment value, if nothing else.