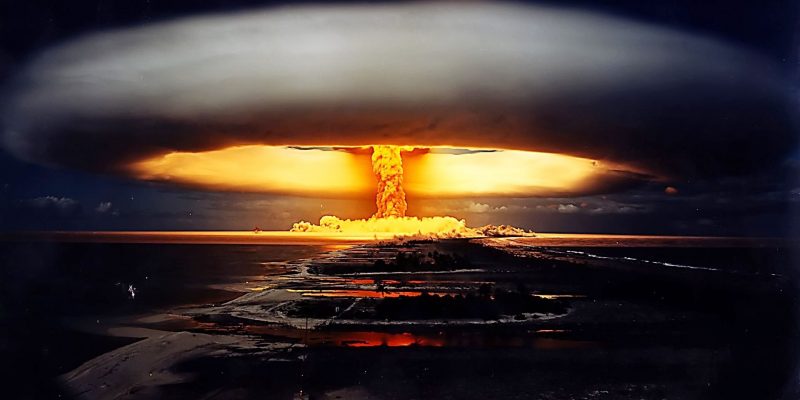 Could the earth, a 25,000 miles-around sphere, be destroyed by nuclear weapons? If so, how many atomic bombs would it take? These are the questions posed to scientists by the tech website Gizmodo.

In Giz Asks, scientists were asked about the limits of nuclear weapons by answering:

“theoretically, how many nukes it would take to send the Earth spiraling off its orbit and into the Sun, and if that’s at all possible.”

Gizmodo also addressed what the impact would be if all of the nukes on earth were detonated. (Of all topics, what a topic to discuss. Talk about apocalypse.)

Their answers are so scientifically nerdy that most will not be able to understand them.

Without being clever about it: All you would need to do is suddenly stop the Earth from moving. Then it just falls in.

Earth kinetic energy (Ed note: the energy of the Earth orbiting the Sun) equals half the Mass of the earth times its orbital velocity squared, around 1040 ergs. (Ergs is a unit of energy). The Yield from the starfish prime test was 1 megaton of TNT (around 1022 ergs). Taking the ratio, you find that you need 600,000,000,000,000,000 nuclear weapons.

Curiously, gravitational binding energy of the Earth (the Energy to counteract the gravity holding the Earth together) is 1039 ergs. So if you tried this experiment and amassed the necessary amount of weapons, you would have ~10 times the energy needed to explode the Earth. Pretty interesting.

Volcanologist, Janine Krippner, at Concord University in West Virginia argues that volcanic eruptions would have a greater impact than nuclear weapons.

Alan Robock, Distinguished Professor Department of Environmental Sciences at Rutgers University, suggests that Gizmodo’s proposition is impossible. He points to catastrophic effects to the climate, including mass starvation caused by the aftermath of war.

Dr. Laura Grego, Senior Scientist with the Global Security Program Union of Concerned Scientists, argues that a large percentage of the world population could be wiped out using less than half of one country’s deployed nuclear weapons. But she can’t comment about what it would take for earth to spiral into the sun.

Of all the things to discuss, nuclear destruction isn’t top on the list for most. Got to hand it to Gizmodo for keeping it interesting.