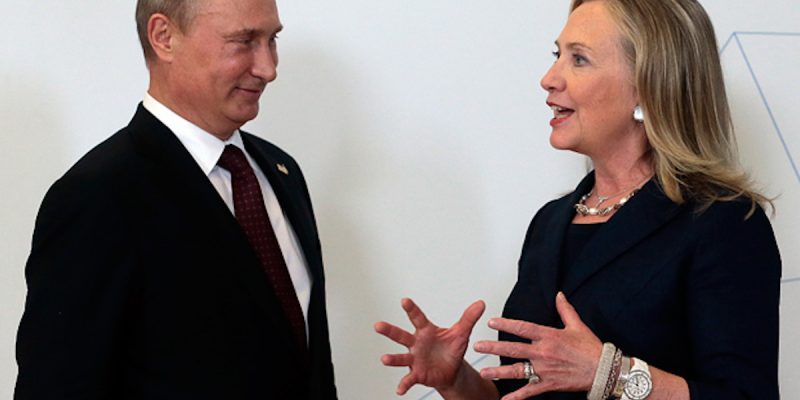 Russian “collusion” — once just the paranoid obsession of American liberals unable to graciously accept defeat in 2016 — may be more real than previously thought, and the new information does not help Democrats.
While  Russia did not “hack” our elections in 2016, Russia did actively undermine the integrity of the U.S. political process, according to Foreign Policy News.

“The Russian government’s involvement, the role and efforts by various personalities on the U.S. soil and domestic lobbies deserve additional scrutiny to investigate the complex web of connections with Putin’s Kremlin,” Raoul Lowery Contreras wrote in May.

And to what domestic lobbies does Contreras refer? “The most peculiar triangle connecting Russian interference in the U.S. domestic affairs is that of the Armenian lobby, specifically, Armenian-American lobby working with ethnic Armenians from Russia and from Armenia,” Contreras suggested.

The Armenian lobby is reportedly a force “surpassed in strength and influence only by the Israeli lobby and the Indian lobby,” states John Newhouse at Foreign Affairs. The “Armenian Assembly of America” alone has 10,000 members and an annual budget of over $3.5 million. The Armenian contingent in America is so strong, that the Armenian mafia was able to steal $160 million from Medicare across 25 different states, before being caught.

Much like during the Cold War, Russia operates through proxies within its sphere of influence, thereby minimizing transaction costs and greatly reducing risk of discovery, i.e. Armenian-Americans.

Not much has changed in terms of Russia’s strategic approach overseas. Even Russia’s Foreign Minister Sergey Lavrov is of Armenian extraction.

RT is a televised global news source competitive with the BBC, and is considered news by some, propaganda by others — a discussion that has no material effect on the unchanging reality of ethnic Armenian dominance at RT.

Instead of chasing phantom Russians, Democrats should be more concerned about the Armenians doing the actual interfering, hacking and colluding on Russia’s behalf. Why? Because, a considerable number of high-ranking Democrats are implicated in major conflicts of interest with Russia’s Armenian proxies, including California U.S. Rep. Adam Schiff.

The congressman even admits he has no evidence, but says it “simply does not matter.”

“We will never know whether the Russian intervention was determinative in such a close election. Indeed, it is unknowable … More importantly, and for the purposes of our investigation, it simply does not matter,” Schiff remarked.

The unbending, black-and-white Russophobic invective from Schiff may be unwise, since he practically owes the shirt on his back to the Armenian lobby. Respected German newspaper Der Spiegel claims that Schiff’s “rise in Congress is owed to the Armenian lobby” — “collusion” by any other name.

He has “the issue to thank for his own political career,” reported Der Spiegel. Perhaps unsurprisingly, former Democratic House Speaker Nancy Pelosi is also hugely indebted to the Armenian lobby.

The Armenian lobby’s disproportionate stranglehold among Democratic lawmakers is undeniable, but what about Republicans? Schiff & Co. are joined by the man himself, U.S. Senate Majority Leader Mitch McConnell.

The majority leader is said to “steer high amounts of earmarks and mandatory allocations toward Armenia,” an article at Foreign Affairs reports. Armenia is second only to Israel as the largest per capita beneficiary of U.S. aid in recent years — all years McConnell was in charge.

“Boy, when we hear from them, we get real interested,” McConnell told the Lexington Herald-Leader.

Despite the examples of KAC and the Armenian lobby, it is extremely important not to overstate the impact of Russian election interference in 2016.

There is actually more evidence that former President Barack Obama colluded with Hillary to steal the election than there is evidence of phantom Russian “hackers.”

Moreover, the argument that because U.S. intelligence agencies agree on something, we should unreservedly trust their analysis, especially when it drips with naked political opportunism, is flawed at best.

And where it concerns “Russian collusion” claims, the argument is not only flawed; it’s also patently false.

“We have 17 intelligence agencies that know — with great certitude — that [the DNC hacking] was done by the Russians [to help Trump],” Democratic member of the House Committee on Intelligence Rep. Jackie Speier recently stated.

The reality? The Obama administration’s Jan. 6 assessment included only three intelligence agencies, one of which was the NSA. The NSA actually intercepts Russian communications and suggested only “moderate confidence” in the conclusion.

The other agencies, the CIA and FBI, cautioned their judgment “might be wrong.” Even more importantly, the assessment concluded that Russian “hacking” was not “involved in vote tallying.”

It turns out, the FBI didn’t even examine the DNC’s allegedly “hacked” email server before concluding the Russians did it.

“We didn’t get direct access [to the server],” former FBI Director James Comey then testified.

Petty theft wouldn’t be prosecuted on the basis of such shoddy forensics.

Besides, Obama himself assured Americans that alleged Russian intervention did not compromise election results. “The election was not tarnished … We have not seen evidence of machines being tampered with.”

The legitimacy of 2016 election results notwithstanding, anti-democratic foreign influence by Russian-backed Armenian proxies is a reality we can no longer ignore.

And yet, the most authentic and dangerously unaddressed threat U.S. citizens face is not Armenians: it’s a political establishment willing to destroy America for short-term political gain.

John Griffing is formerly Associate Editor with The Daily Caller News Foundation (TheDCNF). He is also published at WND, Geller Report, Infowars, National Review, Pravda and Bruges Group and is featured on Fox News, RT News, and Newsmax TV. His interview credits include Fortune 500 executives, as well as key public officials.
Interested in more national news? We've got you covered! See More National News
Previous Article Six robberies in six hours: wouldn’t be a holiday in Houston without crime
Next Article HVEEM: Spirit Of A Nation