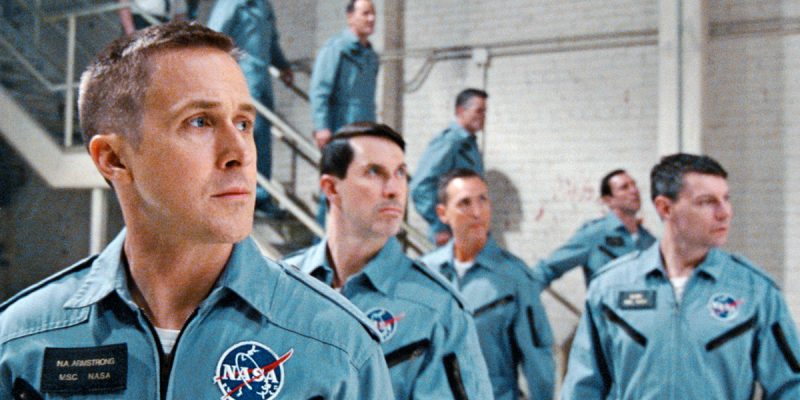 We were excited when we heard about the impending premiere of “First Man,” the new movie about the heroic moon landing of Neil Armstrong. We love historical films, when they’re done well, and there hasn’t been a particularly good one made about the journey to the moon. Television, yes, but not a movie.

We were excited. Not anymore. This sounds like garbage.

A new film about Neil Armstrong has left out the moment he planted the US flag on the Moon.

Starring Ryan Gosling as Armstrong, the film begins in 1961 as the US trails the Soviet Union in the space race and takes viewers up to the Moon landing in 1969.

But while Gosling does declare the moment ‘one small step for man, one giant leap for mankind,’ critics have noted the absence of the stars and stripes in the film, the Telegraph reports.

When the Canadian actor was asked if the film deliberately took the focus away from US patriotism, he said the achievement ‘transcended countries and borders,’ according to the newspaper.

Gosling, 37, said he believes the Moon landing was widely seen as a ‘human achievement’ and that’s what the film reflects.

He added that Armstrong, who died in 2012, was ‘extremely humble’ and deferred focus from himself to the 400,000 people who made the Apollo 11 mission possible.

‘He was reminding everyone that he was just the tip of the iceberg – and that’s not just to be humble, that’s also true,’ Gosling explained.

‘So I don’t think that Neil viewed himself as an American hero. From my interviews with his family and people that knew him, it was quite the opposite. And we wanted the film to reflect Neil.’

Gosling also joked that he may be biased because he is Canadian. Chazelle is French-Canadian.

The decision to place a US flag on the Moon was controversial at the time with debates over whether a United Nations flag should be used instead.

Armstrong himself said that his job ‘was to get the flag there’ and he was less concerned about what flag it should be.

He said Congress had decided that the Moon landing was a US project.

That’s a particular affront not just to the American people – it was American tax dollars, American technology, American leadership and American blood spent getting to the moon – but to history.

Why hasn’t anyone been to the moon since Gene Cernan stepped on that lander back in 1972? Simple. The Cold War ended about 15 years later. The only reason Armstrong planted that flag on the moon in the first place was the Space Race, which was a function of the Cold War.

It mattered that it’s an American flag on the moon. It still matters.

And it’s particularly obnoxious that Gosling, a Canadian who has made his fortune largely off American audiences, should co-opt Armstrong – who has been dead for six years – for his own purposes in saying “Oh, it was no big deal to him.” Neil Armstrong can’t speak for himself in this regard. He might not have weighed in heavily on the issue of the flag, but Neil Armstrong would not have been satisfied with a movie about his life that omitted the planting of the flag on the moon.